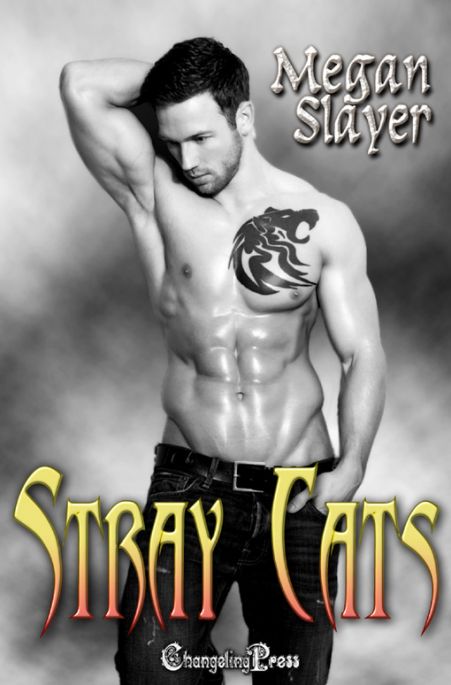 He’s got cat class and cat style — she’s got the flash. Together they’ll create magic.

Hildegard’s given kittens to a few special young women, but her cats aren’t all they seem. Each skeptical owner plus her affectionate shifter equals love cat-style — but will love prevail over the evil threatening to kill their furry best friends?

Together these cat shifters and a very special witch will create magic.

“If I don’t let Godzilla out, I won’t have curtains. Again.” Hayden stepped outside the restaurant and jabbed the numbers on her phone to call her friend, Cole. She needed a ride home.

She clutched her pepper spray in one hand and her purse in the other. No way she’d let some creep-o terrorize her. “I’ve got to get to Godzilla,” she chanted as she waited for her friend to pick up the phone. “I never should’ve let that asshole take me out. Damn grabby hands.” Visions of shredded curtains and one pissed off black cat came to mind. But just like a dog or his monster namesake, if he didn’t have time to wander around the backyard, he destroyed things in her house.

“You never should’ve gone to lunch with him,” a voice said. “Not on Halloween.”

Hayden screamed and whipped around, her purse leading the way. If she was going down, she’d go down swinging. “Who the hell are you?”

The person who’d spoken stepped out of the shadows. “Chill.” He put both hands up. “I’m not armed.”

Hayden inched closer to get a better look at him. Dear God in Heaven, the man was naked and in front of a restaurant full of people. Her gaze roved down his lean torso to the thatch of black hair at the base of his cock. She swallowed hard. Naturally, the crazy man would be good looking. Her luck didn’t run any other way.

A shiver ran up her spine. Didn’t want to hurt her? How the fuck did he know her name? “Who are you?”

“Godzilla. It’s a stupid name for a cat. My brother would be named Godzilla. He likes to bite and scratch. Although, naming him Fang worked, too. Hildy thinks it’s funny to name us after things we do.” He shrugged. “I just destroyed that set of curtains by accident. I never meant to piss you off.” The man folded his arms. His black hair shimmered, and his eyes glowed the same shade of green as her cat’s. He even had the same odd way of staring at her as if he knew what she was thinking, and he talked like he knew all about her cat.

“Do you want my purse?” She stuck out her hands. “Take it.” The guy might remind her of her cat, but cat shifters were the stuff of legend. Besides, didn’t Halloween bring out the crazies? Yes, he was some lunatic in character trying to scare the shit out of her… and it was working. She shivered. “Take it.”

“I’m taking you home.” He swatted her hands down. “There’s a long story I need to tell you, but the short of it is, yes, I’m a shifter. I chose you as my human, and now I’d like to go home and explain where you won’t freak out.” He inched toward her. “I won’t hurt you, but I will rip the limbs off the asshole who dicked you over at lunch. Now let’s go. It’s freezing, and I’m not fond of showing my ass off in public.”

“No.” She held her ground. “I don’t know you from Adam and you want me to take you home? No way, buddy. Blow.”

“Now that’s just mean.” He scratched his brow. “Okay, look, I come from a long line of shifters. Black cat shifters. My litter had four. Hildy knew about us and protected us from a scientist who would like to use me for some crazy-ass experiment. Somehow she knew you needed me. I’m glad you took me home because I knew you were the one for me.” He stepped closer to her. “Hayden, I need your help. We aren’t legend, and some bad people know about me. You’ve got to help me.”

He crouched down before her and curled into a ball. His human form morphed into a cat. After a moment, the cat sat on his back legs and stared up at her. He even had the tiny white tuft on his chest — the same tiny white tuft like Godzilla had.

“Godzilla?” Hayden swayed on her feet. This wasn’t happening. Her cat was a cat, not a shifter. She collapsed on the nearest bench and rested her head in her hands.

A pair of bare feet strode over to her. She glanced at the legs connected to the feet. The man squatted down in front of her. The mystery man who claimed to be her cat. Tears blurred in her eyes. What else could she do? Laugh or cry?

“Hayden, honey, shifting destroys my clothes.” He tipped his head to look her in the eye. “Let’s go home. I’ll explain everything there. I’ll show you what I am.”

Enemies come from many directions, but some are closer to home. 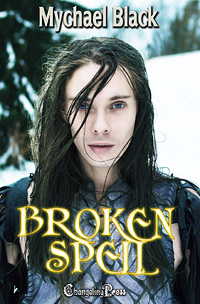 Wizard Micah Norwood was exiled from his cabal, but he didn’t leave empty-handed. Every cabal possesses a Focus Gem, a crystal used to store collective energies, used only for wide-reaching spells. He knows his cabal is readying to overthrow a Dark Fae House, but he doesn’t know why. After meeting Kirof, a Dark Fae on the run from his own House, Micah realizes he can’t let the cabal succeed.

Kirof, formerly of House Vakeor, has no idea why his companion Micah was exiled, but he knows it’s only a matter of time before the wizards or the Dark Fae find them. Desperately trying to keep them one step ahead of their pursuers, Kirof finds himself caring far more for Micah than he should.

Also available at these retailers:

Micah Norwood wandered into the adjacent sitting room, half asleep. He paused in the doorway. Kirof still slept in one of the chairs. Micah had tried getting the man to share the bed, but Kirof had resisted. Micah had never been the type to just make the first move, but waiting for Kirof to do it was slowly driving him insane. The desire between them had been strong from the moment they’d first met. It was a weird mix of hot and unnerving.

He shook his head, belatedly realizing he’d zoned off. He smiled at Kirof. “Lost in thought. Are you regretting the chair yet?”

Kirof stood slowly, wincing as if in pain. Sleeping in a chair sucked. Been there, done that. Micah held the man’s gaze as Kirof approached him. Pale hair fell over Kirof’s broad shoulders, and ice-blue eyes held Micah more spellbound than anything he’d ever conjured himself.

“Not necessarily the chair,” Kirof said.

“Yeah?” Micah stopped short of daring Kirof to take one more step closer. He had to look up, considering the Dark Fae was nearly a foot taller. He’d always hated being short, but something about a taller man made him weak in the knees. Broad, muscled. Kirof defied every Fae stereotype that existed, dark or light.

Kirof braced his hands on either side of the doorframe. Micah forced himself to look at the man’s face and not the muscular arms outstretched above him. Kirof leaned down, and Micah held his breath, praying. Just when Micah thought he’d finally get the kiss he’d been wanting since they first met, someone knocked on the door.

Spell broken, Kirof stepped away, shaking his head as if trying to clear it. Micah wanted to launch an ice bolt at whatever jackass had interrupted. Kirof opened the door, revealing one of his brothers, Roen. Roen’s human lover, Kyle, followed the Dark Fae into the room. Kirof shut the door behind them.

“Have you seen Aron?” Roen asked, his expression one of concern.

Micah shook his head. “I haven’t been awake long. Is Aron not in his room?”

Roen sat down, brow furrowed. “No.” He glanced up. “All his stuff is gone.”

Kirof blinked. “Gone? Where the hell would he go? You know him better than anyone.”

“I don’t know,” Roen said. “This isn’t like him, Kirof. He wouldn’t just up and leave without saying anything to me. Something isn’t right about this.”

“No need to get worked up yet,” Kirof said. “I’m sure he’s fine. Is there anyone else he’d want to visit?”

“Wait. What about that waitress we met?” Kyle asked Roen.

“She and Aron seemed to be rather… friendly.”

Roen shook his head. “Tanra would come here. She knows where this place is. Hell, she’s sent a few folks here for safety. If she and Aron wanted to get together, this would be the best place to do it.”

Kyle grumbled. “I thought twins could mind read each other.” Chuckling, Roen put his arm around his lover’s shoulders. “Fairy tales.”

Something felt off to Micah, though he couldn’t figure out what. Aron had seemed perfectly fine, if a bit aloof, when they’d met. What could have changed? Micah went back into the bedroom and sat in the makeshift circle he’d set out on the wooden floor. He tried focusing on Aron, picturing the man in his mind, every detail.

Hazy images began to form, and he relaxed more to allow them through. Someone, another Dark Fae, spoke to Aron, though the stranger’s back was turned. Micah tried to focus on Aron’s lips in hopes of catching any words that might help. Aron and the stranger started out of whatever room they were in, and Micah caught a glimpse of what looked like an insignia on the stranger’s left arm. A tattoo?

Micah sighed as the image faded.

“Any luck?” Kirof asked from the doorway.

“I don’t know,” Micah said. He looked at Roen, who stood just behind Kirof. “I saw him speaking to someone, another Dark Fae. The stranger had a tattoo on his left arm.” He patted his own bicep. “Black, two swords crossed, with a rose in the bottom open space.”

Roen’s brow furrowed. “That’s House Kehru’s insignia. Aron was supposed to babysit a delegate visiting House Vakeor, but that was before we left. There’s no reason why he’d do so now. He’d be in chains the second he stepped foot into House Vakeor territory.”

“What about exiles from House Kehru?” Kyle asked from behind Roen. “Are there any?”

“Not that we know of,” Roen said. “But I could be mistaken. Micah, were you able to hear them at all? Or see where they might be?”

“I tried to read Aron’s lips, but I assume he spoke your language. None of the words looked even remotely familiar. As for place, a room of stone. Stone walls, ceiling. I couldn’t see the floor. The door they walked out of was wooden, though. No windows either.”

Roen sighed. “That doesn’t bode well. It sounds like he’s back underground, but why? What is he doing there?”

Micah met Kirof’s gaze. The Dark Fae’s expression mirrored what Micah feared might be the case. Micah drew in a deep breath before speaking.

“Roen… how well do you trust your twin?”

Myc has been writing professionally since 2005, solo and with Shayne Carmichael. Genres include pretty much anything (no steampunk yet), though Myc is well known for paranormal stories. When not writing, Myc is usually playing PC games, reading, editing, watching movies and shows on Netflix and Amazon, or spending way too much time on Facebook. Since the question has come up in the past, pronouns are not an issue. Myc is bio-female, mentally male, 100% genderfluid. So any pronoun works!