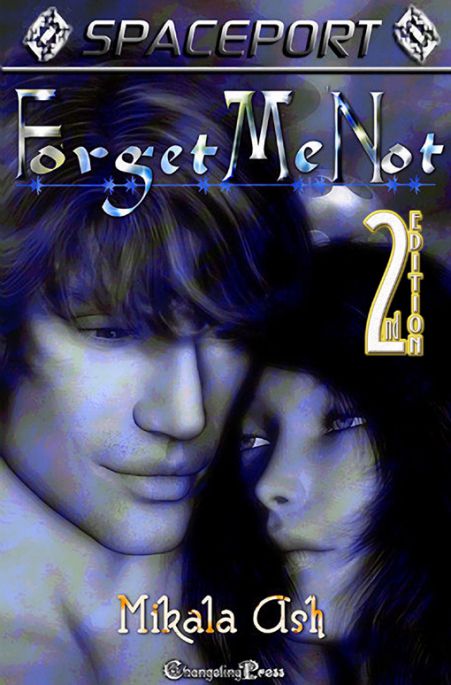 …Dread raked its way through her chest…
“The wreckage was fused solid. There was no hope.”
“Felis, what are you saying?”
“He’s dead, Holly. Maxim’s gone!”

Spaceport Adana goes into mourning for their fallen hero, but Holly Barberossa refuses to believe he’s gone. She wears a Forget-Me-Not pheromone pendant to constantly remind her of the love of her life. She keeps herself busy by reporting on the stalled trial of the traitor, Riz Gitto, who she and Maxim had been instrumental in bringing to justice.

The judge, Kasamee Kee, enlists Silas Archimedes, a private eye, to protect Holly without her knowledge while she uses her as bait to flush out the conspirators, chief among them the glamorous socialite and suspected pirate Mischa and her new slave, the very sexy Murukan.

Can Holly solve the mystery of Maxim’s disappearance? Despite her undying love for Maxim, will Holly succumb to the charms of Silas or the mysterious Murukan, who strangely reminds her of her lost lover?

Holly swept into the office and threw herself into the visitor’s chair. “Hey there, boss!”

Vinnie gazed morosely at her from beneath hooded brows. “Any word from Maxim?”

She sighed forlornly. “Not for a few days.” Maxim’s sudden silence bothered her. A dim disquiet had been growing in her gut when last night’s call didn’t eventuate. She’d sent her own sub-space dispatch but there had as yet been no reply. She didn’t like it. Maxim was a consummate pilot but still she worried about him. The black, the spacer term for the deep dark between the stars, held many dangers that have no respect for human skill or ingenuity.

“When is he due back?” Vinnie asked, drawing her out of her thoughts.

“Not for another month,” Holly said and sighed again. She noticed she had been doing that a lot lately, sighing loud enough for others to hear. She’d never been so lonely before in her life and the feeling was quite disturbing. “He said in his last transmission that he and Felis had found an asteroid with a duridium deposit, whatever that is.”

“Money,” Vinnie said gruffly, but seemed to relax at the news. “He may be longer if that’s the case. Duridium is in demand all across the galaxy. It’s likely you’ll both be very rich, Holly.”

“Don’t worry, boss. I won’t leave you even if I am dripping in gemstones.”

He grunted and she guessed what he thought of the probability of that happening, though Holly suspected there had been something else on his mind. He seemed more preoccupied than usual.

She didn’t like the sound of this duridium stuff. If Maxim and Felis had made a big find they might be away longer than they had planned. She didn’t know how she’d survive.

Holly felt that buzz of excitement whenever there was the merest scent of a story but before she could process that bit of information there came a commotion from outside the office door. Roberta cried out and then the door was flung open. Holly stood up and gazed at the intruder. It was, unaccountably, Felis, who should be out there, beyond Adana’s walls, in the black with Maxim. She automatically glanced over his shoulder expecting to see her love, but Felis was alone.

There was something very wrong with his appearance. The usually immaculate leonine was disheveled and grimy. His golden fur had not been cleaned for days and the fur around his big eyes was matted as if… as if…

Roberta tried to embrace him but the big leonine didn’t seem to see her. His big oval eyes, glistening in the harsh light of the overheads, were fixed solely on Holly. He grabbed hold of her, drawing her into his broad chest. Holly couldn’t breathe he squeezed her so tight. After a moment she pushed him away. “You big cat,” she chided. “What’s the matter? You look terrible.”

She gazed into his agonized expression. She’d been right. He had been crying. The fur beneath his eyes was wet. “Sit down,” she said and guided him to a chair. He took a deep shuddering breath and fell into it as if the strings holding up his powerful body had been cut and he was now exposed as a mere puppet.

“We were staking out our asteroid, putting down beacons, when we heard a distress call.” He took another sobbing breath. “It was a passenger liner, the Euripides. They were being attacked by pirates.”

“And?” she prompted, kneeling in front of him.

“Euripides was holed and disabled,” he cried. “The passengers and crew taken. The captain got off a sub-space SOS before the bridge was blown apart. By the time we got there, the pirates were mopping up, stealing cargo and luggage.”

An empty void was forming in the pit of her stomach. “Go on.”

“We popped out of sub-space in the middle of their fleet. There were six of them.” Felis’s voice broke again. “There was nothing we could do. They opened up on us with quantum torpedoes as soon as we entered normal space. We had no chance.”

That black pit inside her chest coalesced into an iceberg. “Felis,” she said, her voice edged with fear. “Where’s Maxim? Still chasing them, I bet.”

His downcast eyes told her otherwise. “I was clobbered the instant I hit normal space. I peeled away and chased the one that shot at me into sub-space. He was too fast, a fighter, he just winked out. When I got back to the Euripides there was nothing I could do.”

Dread raked its way through Holly’s chest. Blood pounded in her ears so loudly she barely heard his words.

“The wreckage was fused solid. There was no hope.”

“Felis, what are you saying?”

Aussie Mikala Ash lives a hectic double life, mild-mannered training & development consultant by day… wild sci-fi and paranormal adventure writer by night. “For me, burning the candle at both ends is not such a terrible problem; I’m having too much fun!”