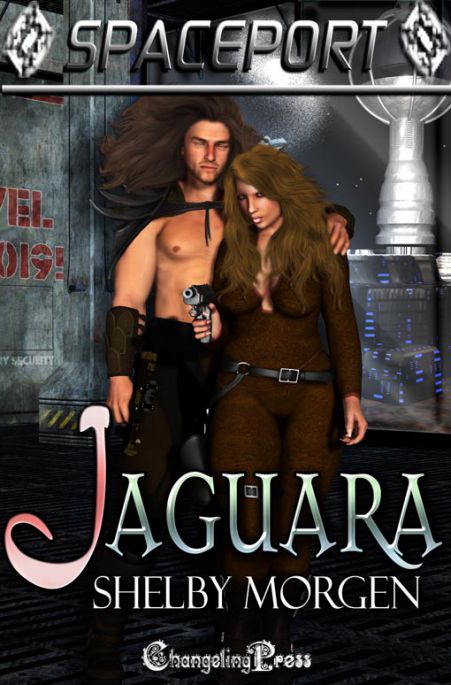 Titan Station’s running low on water. Situations like this call for a little creativity — something cats are usually good at. Unfortunately sometimes wrangling comets means crossing a few interplanetary lines. This time Kiefer Gatson’s got himself in a hell of a mess. One little misunderstanding with the Amalgamated Scavenger’s Guild and now Allied Planet Security’s after him. Worse, he’s got Orloft, the cyborg bounty hunter, on his tail.

Now Kiefer’s stuck — literally — on Spaceport Adana, trying to impersonate a Kitali. Which lands him on top of Officer Ramie, who smells good enough to eat. December Ramie, he could surrender to — or the other way ’round. Either would be fine. But he’s not really a Kitali, and if he shifts now, he’s going to blow his cover.

Before he can save the station and claim the woman as his mate he’s got to wrangle his comet into a docking bay on Titan Station and get paid. Which brings things back ’round to Orloft, his impounded ship, and ten tons or so of undocumented water.

One cat. One comet. One woman. What could go wrong?

“It’s that time of the mornin’ when the sun starts comin’ up, and I’m standin’ on the corner with my guitar and my cup…” From his seat at the bar, Kiefer sang softly in time to the heavy beat of the music. Unfortunately, the Kitali with the mic in his hand was far too drunk to manage to get the words out right. Kitali generally sang badly enough when only mildly intoxicated. This Kat had guzzled down at least five rounds too many.

Kiefer spun to face the voice. Shiny silver-blue hair sculpted into a wave that wrapped around her head, too short skirt, barely there scrap of clingy mesh fabric that revealed more of her boobs than it covered. Waitress. Not a threat. One by one, he forced his muscles to relax. “Thanks, but I don’t have any desire to be in the spotlight.” Oh, like all cats, he loved to sing, especially old Earth “Country” ballads, but he didn’t need that kind of attention. Not here. Not now.

“Can I get you anything?” The look said he needed to order, or move on.

He didn’t bother to look at the drink list. What he really needed was food, something solid to put in his stomach, but he wouldn’t eat anything they’d serve in a dive like The Haze. “I’ll have a Mendozan Cooler.” More credits than he ought to spend, but then, unless he could find out who’d put the bounty on him, and why, this might well be his last night of freedom. Wasn’t like he’d have any use for credits on a penal colony.

“Coming right up.” The waitress gave her hips a little extra twirl as she turned toward the bar, sending her short skirt floating up to reveal the tight, trim lines of her perfectly sculpted ass. Kiefer nearly whistled. That bit of work must have cost a few hundred credits. Nice job.

The Kitali roused himself from the floor in time to sing the line, “But my sun ain’t come up yet this mornin’.” Of course he was at the wrong place in the melody, and obviously paying no attention to the ancient teleprompter, but no one cared. Kiefer wasn’t sure if the few patrons near enough to notice were clapping for his singing, or because it was finally over.

Kitali. Kiefer snorted softly. What an insult to cats everywhere.

“You know that guy?” The waitress was back, nodding her chin at the far end of the bar. “He’s looking for someone. Has a bounty. Picture looks a lot like you.”

Kiefer’s attention snapped from the stage to the far end of the bar. Blyat! Orloft. Not just a bounty hunter — a Battle ‘Borg. So much for going through channels. Whoever was after him had decided to bypass ‘Port Security protocols. Kiefer slapped a fifty credit token on the bar and prepared to meet his fate. Or the back door, whichever came first.

Only apparently Haze didn’t have a readily accessible back door. Lots of shadows and alcoves, but — Sukin Sin! He tripped over the drunken Kitali, who’d crawled off the stage — or been tossed — and nearly went down. Damn thing was next to invisible in the dar… Blyat! That was it!

With a thought, Kiefer vanished, and another drunken Kitali staggered toward the exit. Somewhere deep in the bowls of Spaceport Adana his father rolled over in his grave. Or perhaps flowerbed. Hard to tell with Dad…