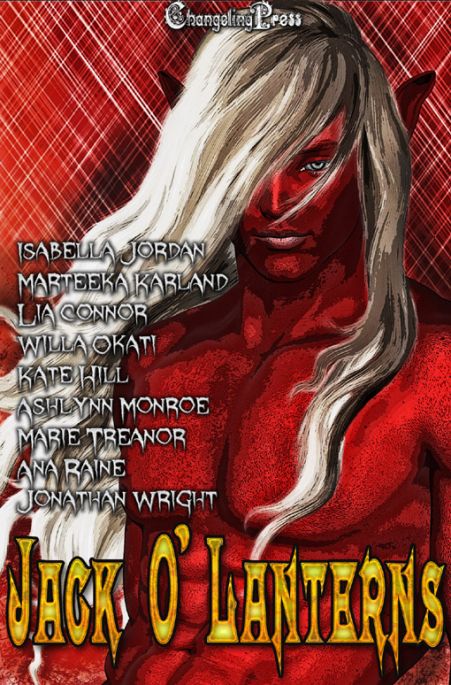 Halloween nightmares & flying broomsticks… It’s All Hallows Eve and you can’t stop the party for long!

Cat Out of Hell by Isabella Jordan — Joey makes Katrina feel things she’s never felt before. But will either of them escape this Halloween nightmare alive?

Voodoo Queen by Lia Connor — When Paul comes to check Marie out will he wind up in her bed? It’s Halloween in New Orleans, and you can’t stop the party for long!

Raven by Willa Okati — On All Hallows’ Eve Leonard comes to Andrew for their yearly tryst. Trouble is, one of them’s a ghost, and can’t stay longer than midnight…

Good Weds Evil by Kate Hill — Trapped between heaven and hell, Evangeline and Urbane have only each other. Forever.

Witch of Alloway by Marie Treanor — When notorious rock star Tam returns to his home village for a special Hallowe’en gig, it’s more than the dead Annie raises!

All Dressed Up by Ashlynn Monroe — Will Isaac be willing to share his wife with two demons?

Kuro by Ana Raine — When Preston saves a black cat everything he knows about life and demons is going to be questioned.

Like The Stars by Jonathan Wright — A vampire will seduce you with detached casualness, but a Lycan will fight to the death to keep you.

Praise for The Headless Horseman

“If you like your erotica galloping fast, then Marteeka Karland’s Jack-O-Lantern: The Headless Horseman is just what you need. It’s light and humorous in all the right places. A fitting read for the season.”

“Willa Okati delivers another… stunner with volcanic m/m intimacy which sears the pages.”

“Incendiary passion burns up this Jack-O-Lantern and makes it a heavenly treat for Halloween.”

All rights reserved.
Copyright ©2018 Isabella Jordan
Excerpt from Cat Out of Hell

Joey grinned from his seat at the bar as he looked around the smoke-filled room. The biker at the bar he’d visited in the last town had given him some good advice. This place really was something different. A wild party where a guy had a good chance of getting laid. Just what he was looking for.

It wasn’t yet midnight and the party was in full swing. Beer and whiskey flowed, the crowd was a nightmarish sea of masked and painted faces. After doing a double take, Joey realized he was the only one who wasn’t dressed up for Halloween.

And I’m in a town called Hell. How was that for his first Halloween as a free man?

Two people were already fucking in a booth near the back, a guy dressed like a Roman soldier and a woman dressed like a naughty nurse. There was another couple next to him, dressed as a devil and his beautiful angel, and from the look on the guy’s red painted face, they appeared to be ready to get it on. Until the devil noticed Joey sitting there.

Following the line of his gaze, the angel turned in her seat to gaze at Joey.

Damn, she was beautiful. Unlike many of the bar’s costumed patrons, she wasn’t wearing a wig or a hat. Just a wire and tinsel halo hovering over long, blonde hair so pale it looked silver. Her skin was creamy white, and a lot of it was visible in the filmy white costume she wore. The tops of her full breasts were revealed by what there was of a bodice and it had his cock throbbing beneath the small table where he sat.

Beautiful, clear blue eyes met his. She liked what she saw too, but the raw lust he felt wasn’t mirrored in her eyes. No, there was something else…

Joey never noticed the devil ease over to his table as he stared at her.

“Do you like angel food cake, my friend?” The man’s voice was a harsh whisper in his ear.

So he was her pimp?

Regardless, Joey loved the thought of fucking her. The physical cravings that had been chemically induced by the men who’d created him, half man and half leopard, and kept him a prisoner for so many years, had lessened to an extent. It was tolerable now. Things had been so easy when he was still with Alex. Sharing the lovely reporter they’d initially kidnapped, without any sort of commitment, just to appease the nagging ache in his loins, had been ideal. It had been Alex who’d fallen for the beautiful blonde.

Something about this little angel reminded Joey of her, of Casey. The thought of having the beauty in front of him in bed made his mouth water.

“Our little angel will spread her wings for you,” the man’s voice droned on close to his ear. “For the right price.”

Her gaze shifted to the devil at his ear and back.