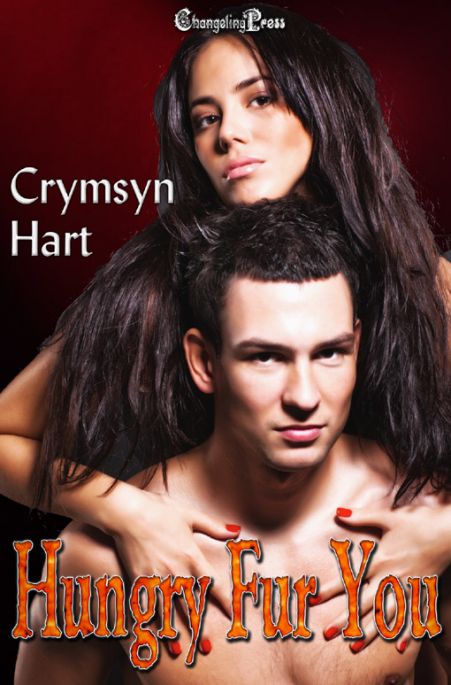 Sadie Matthews thought she had it all figured out with her sexy werewolf billionaire, Elijah Dane. However, she’s bitten by another wolf who thinks Sadie is her rival. Waking up from her transformation, Sadie finds herself in Luke’s cabin. Sexy as hell, it’s all Sadie can do to keep her paws off him because she knows Luke is her mate as well as Elijah. What’s a girl to do with two smokin’ werewolves?

Luke never expected to find a mate in the middle of the forest. When he first catches Sadie’s scent, he knows he’ll do anything to have her. But first, he must return her to Elijah, then deal with dissension in his pack.

Can both men satisfy Sadie’s new desires? Will she give in to the beast inside? And can Elijah and Luke see eye to eye when it comes to sharing their new mate?

or pre-order for September 20th at retailers:

Sadie looked up from her meal and tried to hide her smile. The last year had been a whirlwind. Her relationship with her werewolf lover had been rocky at first, but it had evened out as they both got to know one another, and their boundaries were set on how far she could go. “It’s good.”

“Good. You look happier than I’ve seen you in a long time.”

“I wasn’t the one who disappeared for six months.”

“Didn’t have a choice. There was some upheaval in the Fairy realm. Time runs differently there. I needed to get things back in order.”

“Everything okay over there?” Sadie asked. Now she knew her friend was a fairy, she could ask her all kinds of questions. For years, Narissa had kept her true self a mystery. When they’d met in college, she’d introduced herself as Melissa.

“Nothing for you to worry about. I’m not sure even why they called me back since they don’t like I’m of mixed blood.”

“It had to have been important. Want to talk about it? We’ve always shared everything.”

Narissa poked at her food. “I know. I never told you everything before because I didn’t know how you’d deal with it.”

“I can deal with it. I’m dating the werewolf who killed my fiancé. So spill.”

“Most fairies don’t exist in this realm. We broke from the humans long ago. Those who do — we keep ourselves closed off. I’m not the only shifter among the fae. It seems a couple of them have gone missing. They thought I might know where they were.”

“Did you find them?”

Her friend pushed her plate away and a look of disgust soured her expression. “We found parts of them. They were dissected. They had the stench of humans. The fae don’t think it’s an isolated incident.”

“Indeed. Enough about me, I didn’t come to talk to get you down. I’ve been trying to get in touch with you, but it’s crazy. New job. New place. I told you my protection would bring you good things.”

“Yeah, you did. It makes Elijah jealous. It’s kinda funny to watch when we’re out and random men come up to me.”

“Wolves are protective of their mates, but you haven’t let him make you furry yet.”

She sipped her wine and glanced at the calendar. Elijah was out of town until after the full moon. “I’m not there yet.”

“When do you think you’ll get there? He’s not going to let you stay human forever. Wolves have a long lifespan.”

She held up her hand to silence Narissa. “I know. We’ve already discussed it.”

“Do you have an idea when you might let him turn you?”

“Will it be hindered by your mark?”

“Not at all, it might make you stick out a little bit more. I can’t take it back. Besides, I want to be sure to throw you an epic party when you get all hairy. Then we can hunt together and I don’t have to be so dainty with you.”

“I’m sure you’ll be happy about that.”

“I’m happy that you’re happy. I mean it. You’re working for a company that’s mostly shifters.”

“Yeah. They shut down for the full moon so it makes it better.”

“What does Elijah say about you working?”

Narissa gave her a hug and kissed her on the cheek. “Make sure you keep doing that because once he thinks he can bend you to his will as an alpha, he won’t stop.”

Sadie returned the hug. “Don’t worry about that. He knows that I’m not going to bow down to him in any form.”

A plant rustled next to them and a tall man stepped out from behind it. The texture of his skin appeared to be a blend of bark and flesh. He leaned in and said something to Narissa. She paled.

“Shit. I gotta run. Not sure how long I’m going to be. Gotta go back to Fairy. You two should use my place. Bye, hun.” Narissa waved and popped out, leaving a faint trail of glitter.

Sadie cleaned up and sat down on the sofa, wishing Elijah were with her. He had taken to working from home with her. When it came to the pack, he rarely discussed that part of his life. Her decision not to become a wolf hampered their relationship. Sometimes she felt like the dirty secret he kept hidden in the closet. She glanced at the moon and felt the pull of it herself. Being with him, she had begun to understand the power it had over the shifters.

Maybe I am ready. They both knew it was coming and a condition of their relationship. It always surprised him she hadn’t already turned from the two attacks she had already endured. First, Elijah attacking her two years ago when he killed her fiancé, Greyson, and ate him. He had tackled her and clawed her back. He claimed the wolf realized she was his mate then, but he didn’t know it until later. The second time she had been mauled by a wolf in another pack, but Elijah rescued her.

His wolf grew more insistent that it wanted her to join him. Sadie loved him beyond measure. It didn’t matter he was a billionaire CEO of a large company or controlled the largest pack in five states. All she wanted was him. However, each time during their lovemaking, her fear that he would bite her arose. The strain had started to show on their relationship, forcing a distance between them. Tonight he and the pack would all be gathered at the resort. Sadie had never been happier except for the growing tension between her and Elijah. He wasn’t about to let her go, and she loved him too much to lose him.

At the very heart of the matter, she was afraid. Afraid she would become a bloodthirsty beast that wanted to feast on innocents. She didn’t want that to be her. She couldn’t imagine bringing the fear and the hurt to someone the way it had happened to her losing Greyson. Her fiancé would want her to be happy. Sadie didn’t know if he would understand shape shifters and fairies. He would encourage her to take charge of her life and not live in fear. The way he always did. She’d been putting the decision off for so long, it had become the ugly beast in the room. Her stomach tightened in anticipation. Sadie grabbed a bag and threw some things inside it. She couldn’t wait to see the look on Elijah’s face when she got to the resort. Her resolve tightened.

There wasn’t any going back.

More from Crymsyn at Changeling Press …

Crymsyn Hart is a National Bestselling author of over eighty paranormal romance and horror novels. Her experiences as a psychic and ghostly encounters have given her a lot of material to use in her books. Vampires, grim reapers, shifters, and other paranormal creatures tend to end up in her books no matter how hard she tries to keep them away.

She currently resides in Charlotte, NC with her hubby and her three dogs. If she’s not writing, she’s curled up with the dogs watching a good horror movie or off with friends.

To find out more about Crymsyn, check out her website on: http://www.crymsynhart.com