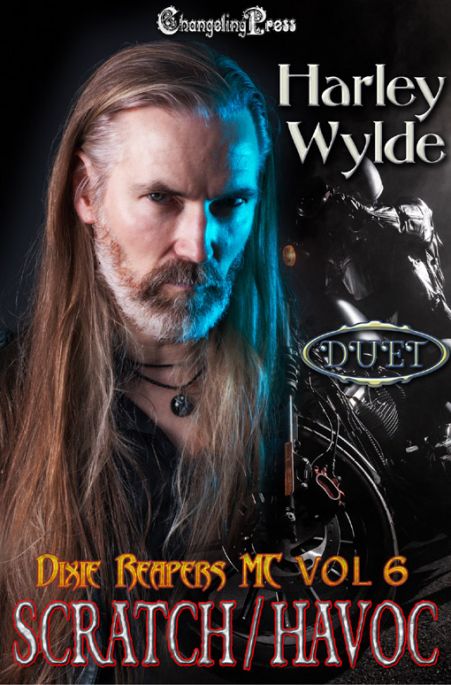 Scratch (Devil’s Boneyard MC 2)
Clarity: I’ve been on my own since I was sixteen, and I’ve fought to make a life for myself and my son. Being homeless certainly wasn’t in my life plan, so when a gruff, sexy biker offers help, how can I possibly say no? I know deep down he’d never hurt us. It just never occurred to me I’d fall in love.

Scratch: The young woman and kid I find sleeping outside my club’s chop shop make me feel things I shouldn’t. She’s younger than my daughter, but there’s fire in her soul, and she leaves me wanting things I shouldn’t. Like a new chance at a family. What the hell would she want with a man thirty years older than her? I’ll slay her demons, bury the monsters from her past, and then I’ll do the one thing I thought I’d never do… claim an old lady, then make her my wife.

Havoc (Devil’s Boneyard MC 3)
Jordan: I spent a year in prison for a crime I admittedly did commit, but I had a good reason. My brothers have abandoned me, and there’s nowhere for me to go. Until the hottest man I’ve ever met decides to be my knight on shining Harley. Havoc isn’t at all what I’m used to, but maybe he’s just what I need.

Havoc: When I find out the same prison that nearly killed me was trying to cover up another incident, one involving the woman I can’t stop staring at — fury flows through me. Whatever it takes, I’ll keep her safe. Whoever hurt her will be coming, and I’m ready. No one touches what’s mine, and Jordan may not realize it but I’m not letting her go.

or pre-order the ebook for September 20th at retailers:

“I’m glad that Scratch found someone. He seemed so lonely… Clarity’s life was so messed up. Thank goodness for the Devil’s Boneyard MC and Scratch. They set everything to rights and then some. These two were so meant for one another.”

“Harley has done it again! This was one of my favorites of hers and if I could have given it 10 stars I would have! Hot, steamy and just the perfect amount of dirty with a younger woman, older man whirlwind MC romance! I can’t wait for what’s next!”

“Mrs. Wylde has really outdone herself this time! This book is simply amazing! I love tough as nails Jordan, she was perfect for Havoc. This book had everything: mystery, chemistry and action. And not to mention sexy times! I hope you continue to write all about of the other men in the club, especially Cinder. I am eager to get his story! Grab this book now, you won’t be disappointed at all. And if you haven’t checked out the Dixie Reapers you definitely need too!”

I had no one. My mom had died when I was two, and when my dad remarried, he’d chosen a woman who liked to pretend I didn’t exist. Soon enough, my dad decided I didn’t exist either. Once his new kids starting popping out every few years, I was pushed to the side, and eventually I left. I’d been sixteen when I’d hit the streets, and no one had come looking for me. I was sure that my dad was relieved I was gone. It hurt, but crying over it wouldn’t change anything.

I’d thought I was doing okay when I found a man about five years older than me who offered me a place to sleep and help getting a job. I should have known not to trust him. Things had been fine for a while, but then he’d started asking to be repaid for his kindness. Blowjobs mostly, except for the night he was high on who knows what and decided to take more than I was willing to give. Caleb was the result of that night. Once I’d found out I was pregnant, I’d taken off. Even though the man hadn’t touched me again, I hadn’t wanted to take any chances.

A women’s shelter had helped at first, even found me a job and a place to live. Things had been going pretty well, until two months ago. The little thrift store where I’d been working shut down without notice. I’d had enough in the bank to keep our tiny apartment for another month, and then the money had run out and I hadn’t been able to get another job. So we slept where we could, ate what we could, and just tried to survive.

The church over on Pine Avenue would let me take a shower and would give me a dress out of the donations to wear for interviews, and the nice lady who worked in the church office would watch Caleb for me. I’d applied to every place in town that was hiring, and no one had wanted me. Our situation was bleak, but as long as we had each other, then I’d keep fighting. If Caleb weren’t with me, I might have given up by now. Or decided to join the ladies who worked the street corner on the other end of town. But I’d been a virgin when Caleb’s dad had raped me, and I couldn’t bring myself to take that step. Not yet. I didn’t think badly of the women who made their living that way, but I didn’t think I could do it.

An auto repair shop was just a few more steps away, with a large enough doorway that Caleb and I could hide in the shadows and get some sleep. I checked the hours on the window and saw it wouldn’t be open for at least five more hours, which meant I could rest a little. I’d learned to sleep lightly, so that I’d wake up at the first sign of trouble, or whenever Caleb stirred. I was always scared I’d sleep so hard that he’d wander off and I’d never see him again. Hunkering down into the corner of the doorway, I settled Caleb on my lap and used my backpack as a pillow. My son snuggled against me and closed his eyes.

I didn’t think I’d been asleep for more than an hour when I heard a loud rumble. My eyes opened as a single headlight focused on us, making it hard for me to see. I held a hand up to my face, and shielded Caleb with the other. The light stayed on, but I could barely make out a shadowy figure dismounting from what I’d figured out was a motorcycle. The man approached and loomed over us.

“This is private property,” he said, his voice deep and raspy.

I could feel his gaze raking over me. I managed to get to my feet without stumbling, got my backpack straps over my shoulders, then hefted Caleb into my arms.

“Where are you going to go?” he asked.

“Doesn’t matter. I’m sorry we trespassed,” I said. I hitched my backpack a little higher over my shoulder and clutched Caleb to me. I tried to step around the large man, but he reached out and placed a hand on my shoulder.

I froze under that touch, tensing and waiting to see what would happen. Is this where he offered me a place to sleep in exchange for the use of my body? Wouldn’t be the first time I’d had that offer made to me, and I doubted it would be the last. I would do anything for my baby to have a place to rest and food to eat, or nearly anything. We’d struggled and things were bad, but I didn’t think I could handle having strange men touch me. Not after Caleb’s dad, or more like sperm donor. I didn’t think he would come after Caleb, even if he knew my baby existed, but I’d decided not to take any chances. Thankfully, I hadn’t seen him since we’d left. For all I knew, he wasn’t even in town anymore.

“Christ, you don’t even look old enough to have a kid,” he muttered.

My chin raised a notch. “I’m nineteen. Well, almost nineteen. Not that it’s any business of yours.”

I saw a flash of white teeth as he smiled in the darkness. “All grown up then, aren’t you? Eighteen, nearly nineteen, and think you know everything I bet. Why are you sleeping in the doorway of my business?”

I glanced behind me before facing him again. “I told you we didn’t mean to trespass.”

“That doesn’t answer my question.”

“We didn’t have anywhere else to go,” I admitted softly, my arms tightening around my son.

“There’s a lot of expensive equipment in there. Going to steal anything?” he asked.

I felt fire ignite inside me and I clenched my teeth a moment. I might be broke, but I wasn’t a thief!

“Come on.” He walked up to the doorway I’d just vacated, then he unlocked the front door and pushed it open.

I hesitated. I didn’t know if I could trust him, and figured my chances were better out here in the open than inside, but what if he was going to offer food for Caleb? Or maybe there was a couch in the waiting room and he’d let my baby rest there for an hour or two. It was an opportunity I couldn’t pass up, but at the first sign he was going to be a perv, I was out of there.

I stepped inside as he flipped on the lights, and I blinked at how bright they were. There was a beat-up leather couch with duct tape holding it together, and a scarred table with a few magazines on top. But the man didn’t stop in the front room. He kept going, so I followed at a slight distance. If I needed to run, I wanted a head start.

He entered a small, cluttered office and turned on a lamp. It glowed softly, the light dim, but there was a huge couch on one wall that looked a little too inviting with its overstuffed arms. It was leather, but unlike the one out front, it didn’t have so much as a scratch on it that I could see. The man pulled a blanket off the back and motioned toward the couch.

“You can rest here a while. I can either lock you in and reset the alarm, or I can stay until you’ve had a chance to rest. I’ll leave it up to you. But know that if you steal so much as one thing, I will track you down,” the man said.

I focused on him and noticed he wore one of those black leather vests I’d seen the local bikers wearing. Scratch — VP was stitched on the front. He was an older man, a bit of gray at his temples and in his beard. I was horrible at guessing ages, but if I had to, I’d place him in his late forties or early fifties. He had the kind of eyes that looked like they had seen far too much, like he’d fought wars I could only imagine but was still standing. He was strong, his muscles stretching the sleeves of the T-shirt he wore, and his jeans encased muscular thighs. He could easily overpower me, and yet he hadn’t come close to me since grabbing my shoulder earlier.

He nodded and looked at Caleb, who was yawning on my shoulder.

“When’s the last time the two of you ate?” he asked. “And I mean real food, not something you’ve scrounged from somewhere.”

More from Harley at Changeling Press …

Where to find Harley Wylde…