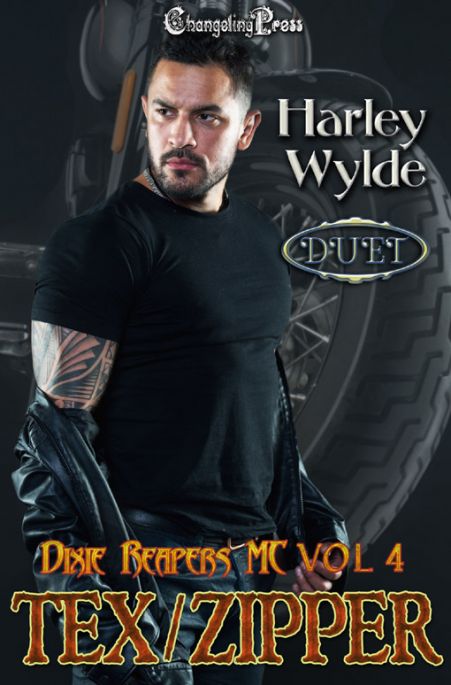 Tex: Fifteen years ago I signed away the rights to a child I’d never seen and joined the Army, putting my past, including the Dixie Reapers, firmly in my rearview. Now I’m back, and I’ll do anything in my power to save the daughter I’ve never met. I just didn’t count on rescuing two damsels. Kalani’s got trouble written all over her.

Kalani: Hillview Asylum looks presentable enough, but I know firsthand the horrors inside those walls. Now I’m faced with a man who makes me want things I shouldn’t, but Tex keeps the nightmares at bay. For the first time in my life, I feel safe. Protected. But now I want more… I want to be loved.

Delphine: Six years ago, I chased away the guy I’ve been in lust with ever since my hormones kicked in. Now I need help, and there’s nowhere to go except straight to the Dixie Reapers. If Zipper won’t help me, I’m as good as dead. Is it wrong that I hope I end up in his bed? I’ve never stopped wanting him, and I know I never will.

Zipper: The girl who had turned my life upside down wants my help. Now she says I can have anything I want. Naughty girl. Didn’t anyone ever tell her not to tempt the devil? As for the men trying to kill her, it’s only a matter of time before they breathe their last. No one hurts my woman.

“You coming in or are you gonna stare all night?” the Prospect asked, tossing the cigarette away.

I approached the gate and held up my cut when I got there. His eyebrows lifted as he looked at the Dixie Reapers patch on the black leather, then his gaze took in my Army-issued duffle and the dog tags hanging around my neck. Something entered his eyes, like understanding, then he slid the gate open and let me inside.

I smiled a little. “Thanks. Torch inside?”

Torch and Venom were married with kids? Hell, I’d never seen that one coming. It made me wonder what else had changed around here. I guess I hadn’t given it much thought, almost like my past had just stayed frozen in time while I’d been off being a soldier. My thoughts must have been showing on my face. The Prospect smirked and shook his head.

“If you can’t believe that, then you definitely won’t believe that Bull and Preacher have old ladies now too. And Ryker Storme claimed Flicker’s sister. Even though his daddy is the Pres of Hades Abyss, he’s stuck around so Laken can be near Flicker.”

“I don’t know what the fuck is in the water around here, but I think I’ll stick with beer. No way I’m letting some woman into my life like that,” I said, shifting the weight of my bag.

“Now that you’ve said that, you’ve just doomed yourself.” Johnny smiled. “I bet you’re leg-shackled before the end of the month.”

I snorted. Yeah, not fucking likely. With a salute, I headed toward the clubhouse. Better to get this shit out of the way. I had no idea who was inside, or if I’d know anyone in there at all. As far as I knew, all my old club was still active, but I had no doubt a lot of new faces had joined over the last fifteen years. The kid at the gate couldn’t have been more than twenty. The club needed some young blood. The rest of us were getting too fucking old.

I pushed open the door and stepped inside. A mug was slammed down on the bar top, and a moment later, I was engulfed in a hug from a man nearly twice my size.

He slapped my back and pulled away, smiling broadly. “It’s fucking good to see you, Tex. Thought you’d never make it back.”

“Guess I got tired of following the rules.”

He motioned to the cut clutched in my hand. “Why aren’t you wearing that? You’re still one of us.”

He took it from me and tossed it to the Prospect behind the bar. “See that a new one is ordered for Tex.” His gaze scanned over me again. “Better ask for an XXL. Fuck, man, you’re almost as big as me.”

He grinned and slapped my back again, nearly knocking me off my feet. I didn’t know if I even still had a room here at the clubhouse, and I wasn’t sure how to go about asking. Yeah, these guys were considered my family, but I’d pretty much abandoned them fifteen years ago. It was a little presumptuous of me to just appear and expect everything to go back to normal. I’d hoped Torch would be around so we could talk.

“Why don’t we grab a beer and catch up?” Tank asked. “A lot of changes around here since you’ve been gone.”

“I heard Torch and Venom both have old ladies. And Bull? Shit. After what happened with his baby momma, I thought for sure he’d steer clear of relationships. That bitch was something else.”

“Shit, Ridley is married?” I asked.

I spit out the swallow of beer I’d just taken. “Are you fucking kidding?”

He shook his head. “Bull wasn’t too happy about it at first, but he’s come around. Venom treats Ridley like a queen. They have two kids, both girls.”

“And Torch? The Prospect at the gate said he had a wife now.”

“Isabella. She’s like thirty years younger than him, but I’ve never seen two people meant for each other more than those two. They have a kid too.”

“Definitely not drinking the water around here,” I muttered as I swallowed more beer.

“Since you left? Yeah. A lot of Prospects have come and gone over the years, but a few have patched in. Our newest is Coyote,” he said with a nod toward a table in the corner.

The guy looked to be near my age, and he wasn’t lacking for female attention. My dick didn’t even stir as I looked at the mostly naked club sluts draped over Coyote. It had been so fucking long since I’d been laid, I wasn’t sure my cock even worked right anymore. When I was younger, I’d had a different woman every night. After joining the Army, the women hadn’t been quite as plentiful, or more aptly put, my days hadn’t been quite as free. Over the years, I’d soured toward females, not trusting them. Getting my dick wet hadn’t been worth a possible STD or being trapped by some conniving bitch who got pregnant on purpose. So I’d abstained. Now I never even felt the urge anymore. I could probably walk onto the set of a porno and my dick wouldn’t so much as twitch.

Pathetic. That’s what I was. Thirty-five and my cock was fucking useless except to take a piss. Probably for the best. When it had been in good working order, I’d knocked up the girl I’d been seeing. Just hadn’t realized at the time that she was sixteen and had been using a fake ID. Had I known she wasn’t eighteen, I wouldn’t have fucking touched her. I’d miraculously gotten off without jail time and had entered the Army a few days later. I had no clue what happened to that girl or my kid. I’d thought of looking them up a few times over the years, but the girl’s parents had made me sign away my parental rights to my kid. Some days, I regretted doing that. Had she even kept the baby?

“Taking a trip down memory lane. It wasn’t a happy memory.”

He nodded. “There’s someone you should meet. Come on.”

More from Harley at Changeling Press…