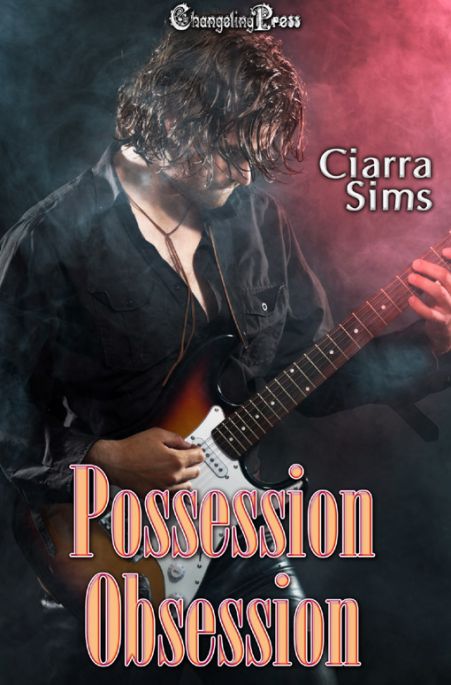 Gypsy magic woven through the fabric of time…

When Chloe inherits her Great Aunt Antonia’s legacy — a mysterious trunk filled with lovely lingerie — her life takes an unforeseen turn. The beautiful old undergarments have magical powers — and a mind of their own. For the first time in her life, Chloe finds herself irresistible to men. But there’s only one man Chloe wants — and that man just happens to be world famous rock star Slade Brandt — Sam Brandenburg, her high school crush.

Chloe Carlyle stared at the man who moved across the club as if he owned it. Slade Brandt walked the walk of someone who knew who he was and where he was headed — straight to the top.

And why not? He’d always been that way, even back in high school, when he was known as Sam Brandenburg. It was just Sam’s nature to be assured and cool. He’d been cool enough to set up a garage band and practice until they got it right. Smart enough to change his name and enter a Battle of the Bands contest sponsored by the local radio station. And though his band didn’t win, he’d been savvy enough to get noticed and land a contract based on both talent and raw sex appeal.

Oh, yeah, Slade Brandt definitely qualified as a babe magnet. Even in high school when his looks were adolescent and stringy, he’d still been a catch. He’d had some intangible magnetism that inspired a girl’s hormones to flutter.

Back then Chloe had been a bookworm, complete with glasses and watery faded blue eyes. Her body had matured late and never quite lost its baby fat. Sam was two grades ahead of her and out of her league even then.

The first time he’d noticed her, she’d humiliated herself. She’d dropped her books. When he handed them back, Chloe was so surprised she gasped, and her gum fell on his shoe! She’d mumbled a garbled “Thanks” that came out more like a burp.

Some impression she’d made…

Eight years later, Slade Brandt’s latest single was number two on the charts with a bullet, his last album had gone platinum, and he traveled with his own handpicked musicians now… and naturally, the groupies. But he hadn’t forgotten his roots. When he wasn’t on tour he always came home to visit his family.

And Slade still frequented the club that had given him his break.

Now he was about to honor that very club with a performance — a nod to his beginnings — and the place was packed. In a standing room crowd only, Chloe ended up plastered against the wall, hoping something about her would stick out, light up — somehow attract Slade’s attention. But why would it? She’d never lost that baby fat. She still lacked the sparkle and shine that attracted a man’s attention.

So Chloe had to make do with watching Slade as he leaned back, casually lounging in his booth of honor, an eager groupie tucked under each arm. The blonde on his left scooted closer and Chloe just knew her thigh pressed against Slade’s. The dark-skinned girl to his right was older. She turned her eager lips to Slade’s neck, nuzzling him. He obliged by giving her a French kiss that was blatantly for show. His tongue moved slowly into her mouth, then enthusiastically worked to and fro.

Chloe hated both girls. She didn’t know them, but that didn’t matter. She hated what they represented — the perfect body, heavy in the boobs, small waist, tight ass. They wore barely anything and Slade let them slobber and hang all over him. He probably fucked them both, too — at the same time. She’d read in one of the tabloids that he liked his girls two on one.

Chloe watched him finish the kiss with the dark brunette and turn to the blonde. Slade’s long dark hair fell to his shoulders. He pushed it back and bent to nuzzle at the busty young woman’s chest.

Someone snapped a picture and he laughed. Another flash went off and a bodyguard stepped in front of Slade to keep it from becoming a paparazzi feeding frenzy. Chloe wondered what it would be like to have her picture splashed under a headline for anyone to see in a checkout line. “Slade’s new girl. The love of his life, he vows.”

Chloe chuckled and sipped her piña colada. Fat chance. Even if both girls hanging onto Slade stitched their clothes together, she still wouldn’t fit into them. She heard the announcer give Slade his intro. The blonde scooted out of the booth and Slade slipped out, his faded jeans sinfully tight on his buff physique. Oh, he’d changed since high school — and all for the sexier. He oozed a fucking pheromone that made all the girls wet. Chloe knew it. Her own panties were sopping despite the cotton absorbent crotch.

She wished she could wear those wispy little thongs that women always threw on stage for Slade to pick up. If the panty donor looked particularly buxom or beautiful in that naturally sexy way Slade preferred, he’d sniff the undies and grin wolfishly. Then a bouncer would approach the lucky lady and escort her backstage for Slade’s own session of fan appreciation.

Oh, yeah, she knew how it worked. She’d dreamed of being one of those women since Slade had been plain ol’ Sam, but even back then, she hadn’t stood a chance. Now as he stepped on stage and the crowd roared, she sure as hell didn’t have an ice cube’s chance in Hell.

More from Ciarra at Changeling Press…

Ciarra Sims is one of the quiet ones you have to watch out for. She lives a plain and simple life in Southern California with her pets, and tries to stay out of trouble. Her writing may be comedic or scary, depending on her mood… or it may sway toward a Regency or even a western… whatever tickles her fancy at the time. Ciarra’s writing philosophy is: “Not to fall into a rut. Keep the reader and yourself wondering, ‘What’s next?'”