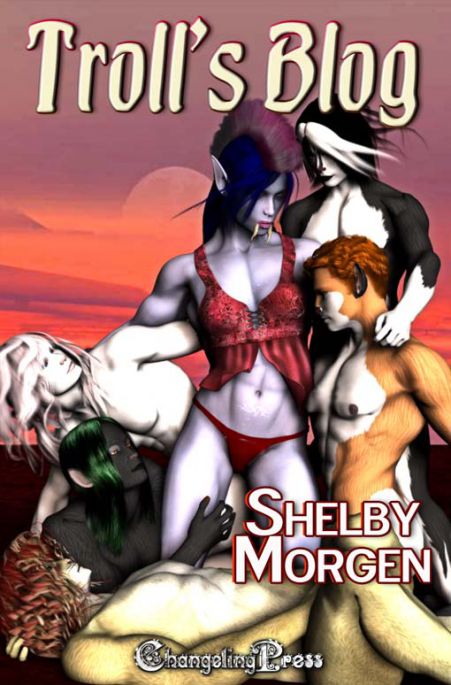 So you want to know about Trolls. Well, the only thing I can tell you is about this Troll. I’m taller than most of you, stronger, faster, and I have wicked teeth. All perfectly straight, thanks to modern orthodontia, and very, very sharp.

If you’re a Troll, what better place to hang out than under a bridge, right? I mean really. What’s the use in being a Troll if you can’t catch a good laugh now and then? But if you’re a Cop, chances are you’re like genetically predisposed to mess with the Troll. Not a good move. Especially when the Troll has a thing for Cops. Especially tall, strong, hot bodied cops… Or at least one Cop in particular…

Oh. Sorry about the ads… we’re using a lot of bandwidth these days. Got to do something to stay on the grid.

Troll’s Blog includes: Troll Under the Bridge, Troll in the Shadows, Den Mother, and Window Shopping.

We’ve all heard the stories. The waves of mutations started with the Corporations screwing around with our genomes. We were all really hatched up in some Corp lab somewhere. Nothing natural about us at all.

Oh, the Corps didn’t start this mess. Old Mother Nature did that herself. Geneticists call it Punctuated Equilibrium. We’re living proof that species don’t really evolve slowly over time. More like we run into an environmental brick wall and have to adapt or die out, so we adapt. Now. In like one generation. Which, while it scared the crap out of people for a while, is probably a good thing, because, like I said, bigger, faster, stronger… and smart enough to avoid the Corp scientists who wanted to play with our molecules.

By now you’re probably as bored as Mattie is, so let’s get to the good stuff.

Five of ’em. Jinks, Felix, Tonk, Tony, and Sebastian. Long and lean and sleek as cats. Cause, well, they are cats. Not shapeshifters in the traditional sense. Gawd. Like there’s a tradition for shapeshifters. Anyway, Mattie called ’em Werecats. I’m not sure that’s the right term. They don’t shift from human to cat and back. They’re cats. They’re always cats. They shift from walking, talking, upright cats to… well, something you don’t wanna meet in a dark alley.

Come to think of it, you don’t wanna meet any of us in a dark alley.

Being as the world’s kinda falling apart at the moment, what with anarchy only one political fuck-up away, and what with me being a geneticist, as well as a Troll, you can see why the Corps thought I ought to come to work for them when I graduated. Berkeley thought I should stay there and teach. My mother thought I should find a nice young man and get married. Shrug. Moms.

I took the Corp job. Why? Not because I trust and admire their work, that’s for sure. No. I’d heard the rumors… we all had. I’m a curious sort. I wanted to know the truth about our genetics. Where better to go than the source to find out if the rumors were true?

Still, I was there, working with the best equipment in the world, in the most classified lab in the world, for almost a decade before I found the hidden lab.

I’d say the lab was in the basement, but the entire structure was subterranean. You know that old game they brought back for PS-X, Resident Evil 19 or something like that? With the underground labs and all the zombies? Well, I never found the zombies. That’s about the only thing I didn’t find, though.

I was having a hard week. Accidentally blew up the lab again, that sort of thing. But that’s nothing compared to the turn my life was about to take. Cause I just found the lower level. And these lab rats aren’t like any I’ve ever seen.

I got in pretty much by accident. Ran my security card through the access panel to the supply cabinet and entered my code wrong. I held down the last digit — a 9 — too long, and it repeated. I knew, in that same way you know the bacon’s going to burn before you get back to it, that I’d screwed up. Expected loud noises followed by security teams showing up.

So I entered my code again. Still the door didn’t budge. Instead the wall moved. I kid you not. This not-so-little piece of marble panel slid open, and the next thing you know I’m in an elevator I’ve never seen before. Going down. And for all the fact that this elevator only had two buttons, it was a mighty long trip down.

To… nothing. I thought at first it was the subterranean power plant. If you’ve played the game you’ll remember that one. Never did find that level. What I did find was a large room — easily the size of a basketball court — empty save for a few bits of shredded paper and a couple rows of cages along the far wall. Very large, empty cages. This much I got by the dim glow of the elevator light before the doors whooshed shut behind me, plunging me into total black.

Mind you, my night vision is extremely good. So I didn’t panic immediately. I waited.

Nothing but unrelieved darkness. Even night vision needs something. Moonlight. Starlight. Some native light source to amplify. There was none. Clearly time to go back up the elevator. Except that when I felt along the wall behind me, I couldn’t feel the elevator doors. Or their access panel. No doors, no seams, no little raised panel frame.

I sensed that now might be the right time to panic…

Except that panic rarely accomplishes anything. The doors hadn’t moved, and neither had I. So they were still there. What I needed now was a light switch. I began to feel my way along the wall. After all, I had a pretty good snapshot of the place in my head, at least the near end, and the elevator doors were in the middle of the wall. How lost could I get?

I already knew the cages were empty. Whatever had been down here, they’d moved everything out, right down to the paper shredder. I traced the wall to the far end, my hand trailing along about light switch height. If you think about it, they’re always in the same places. Probably some code for such things. I reached the corner without finding any interruption in the cold, smooth surface. A bit disappointed, I started to turn back.

You’re not Herman. Who are you? Excerpt from Troll’s Blog: Denmother