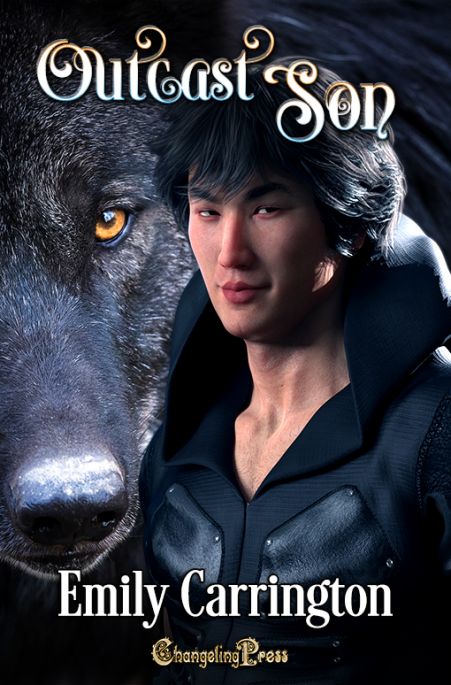 Cast out of his pack for being psychic, Seiji seeks a home. Though he thinks of himself as lesser and doesn’t believe anyone could ever want him, he still yearns for love.

Nicholas sees all of Seiji’s potential, but he finds it difficult to be attracted to someone who’s so lost. Will Nicholas’ capacity for loving kindness help Seiji find himself and what his heart desires most?

Nicholas was a grunt at the campus’s main library. He did all the deliveries to departments, like trundling the projectors or VCRs around. Some of the newer rooms had LCD screens, but not everything had been upgraded. According to the head librarian, Mrs. Smythe-David, funding was being spent on more important things. Like books.

“It’s always preferable to use things until they’re no longer of use. And many of our volumes have been read to rags.”

Nicholas tended to think that access to good technology was just as important as written knowledge, but he didn’t dare argue with his boss. Being a grunt meant he could be fired out of hand if he roused any of his coworkers’ ire.

Today, his mind was taken up with thoughts outside of work as he shelved tomes on this or that. He was thinking about Seiji. Even if the black haired werewolf with the Japanese features didn’t remember him, Nicholas had watched him all semester. Not because Seiji was particularly outspoken in class, but because he was attractive. In a scruffy, clothes-too-big sort of way. His brown eyes were soulful and his small mouth was beautiful when he smiled.

Nicholas had slept with over half of the gay or bisexual males in his year. It was time to expand his circle. And maybe Seiji wasn’t gay, or bi, but there was no harm in asking.

The best thing that ever happened to our world, he thought as he shelved Magical Flora and Where to Find it, 23rd Edition, was Tilthos Charles taking over as alpha above all alphas. LGBTQ and psychic wolves are equals with straight wolves now, and having sex with someone doesn’t automatically mean you have to marry them.

Of course, there were still those traditionalists who discriminated against LGBTQ wolves, and even more who still thought having fun in the bedroom should lead directly to mating for straight and nonstraight wolves alike, but Alpha Tilthos Charles was slowly changing attitudes.

His shelving done for awhile, Nicholas headed back toward the front desk. Doubtless someone would have something for him to do. He only hoped it wasn’t cataloguing. That was boring, dusty work.

He passed one of the study carrels, glanced over… and stopped. Seiji was sitting there, poring over an open textbook. He kept rubbing at his forehead and there was a deep frown on his face.

“Do you work with flash cards?” Nicholas asked, thinking of a particularly arousing way to use the standard study tool.

Seiji jumped. He said something in another language that sounded like a curse because of the inflection he gave it. “You scared me,” he said. Then: “I know. I know. Trackers are supposed to be ready all the time.”

Nicholas blinked. “You want to be a tracker?”

Seiji said defensively, “It’s what I want to be.” He glanced at Nicholas and seemed to rein in his ill mood. “What about you?”

“A negotiator for Werewolf Watch. Why do you want to be a tracker?”

Seiji shrugged. “What did you ask about flashcards?”

So. He can be circumspect about some things. “I was wondering if you use them.”

Nicholas’s cock seemed to leap to attention. He repressed a grin by reminding himself that Seiji might not even be gay. “I’ll make you some if I get a chance. If not, we can start with that tomorrow. It’ll be helpful,” he added when he saw Seiji’s doubtful expression.

“I can’t remember anything even after I’ve just read it,” Seiji said morosely.

“That’s because you haven’t turned it into a game yet.” Nicholas winked. “We’ll meet in my room, like we discussed. Ten still okay with you?”

“And if you’ll take one more piece of advice, lay off the book reading for now. All it’s going to do is frustrate you.”

Seiji hesitated. Then he closed the book slowly. “I guess I could give it a rest for a little while. Do you want me to make the flashcards?”

“Nope,” Nicholas said as he came to a decision. “We’ll do it tomorrow after I quiz you.”

“Why am I going to test your knowledge? So I know where you need help.”

Seiji sighed and began packing up his text and notes. “I don’t know anything.”

Nicholas crossed to him and touched his shoulder. “One thing you can work on tonight,” he said softly.

“Stop calling yourself a failure in the back of your head.”

Nicholas nodded. Then he leaned close and kissed Seiji’s cheek. It was a bold move, especially with his lack of knowledge, but he couldn’t help himself. The shorter wolf looked so lost and vulnerable. “Do yourself some good. I can see you’re going to worry all night long. Take a run.”

“Around campus?” Seiji sounded like that didn’t seem too exciting.

“How about just around the track?” Which was the only place, except the perimeter, where magical creatures were allowed to run in their true form. “Shift to your wolf and go for broke. See how fast you can go, and for how long.” He kissed Seiji again because the other wolf hadn’t pulled away. “I expect a full report in the morning.”