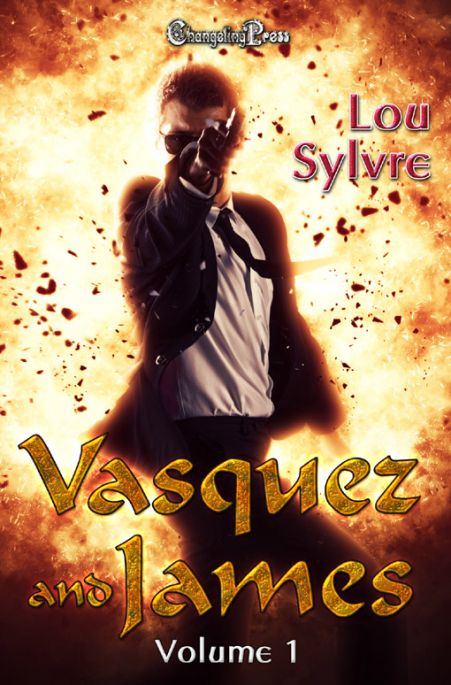 Loving Luki Vasquez: Renowned but reclusive weaver Sonny Bly James masters color, texture, and shape in his tapestries, but when he meets Luki Vasquez, an ex-ATF agent and all-around badass, his heart and desire spin out of control. The heat between them won’t be denied. United by danger, can Sonny and Luki put fear and anger aside, and fight together to save Sonny’s nephew and their own lives?

Delsyn’s Blues: Devastated by loss, Sonny James listens to a voice singing the blues from beyond the grave. Convinced he’s failed in an all-important life task, he tries to shut out Luki Vasquez and love just when he needs him the most. But when Luki finally breaks through Sonny’s fortress of grief, it’s just in time for the newly reunited couple to face a new, violent, escalating danger.

Finding Jackie: When Sonny James asked Luki Vasquez to marry him, Luki’s “yes” was accompanied by a request — a wedding in Hawaii. Months and many trials later, their hilltop island ceremony is poignant and funny, and every bit as beautiful as they’d hoped. The honeymoon is all sex, surfing, and sunshine… until Luki’s sixteen-year-old nephew is kidnapped by a sadistic killer. When it all comes to an ultimate showdown with evil, it’s not only love at stake, but their lives.

Bright clothes, sunburns. Summer had arrived, and Port Clifton was awash in tourists. Since Juan de Fuca Boulevard constituted most of the town, they had nowhere else to go. They chattered and milled about, and Sonny Bly James wasn’t in the mood for chatter or milling because he was worried about his nephew, Delsyn, who always stayed gone for days, but who should have come home by now. Sonny quickened his long-legged strides and slid through the crush, trying to disturb the air as little as possible on the way to his truck.

Then he saw a man.

Which in itself wasn’t unusual, but this man, an islander, maybe Hawaiian, by the look of him, lounged cool and beautiful in loose summer whites, half-sitting on the fender of an ice-blue Mercedes, a strip of sand beach and the blue straits for a backdrop. Dark chestnut curls shining; straight, white teeth softly teasing a lush, plum-red bottom lip. His eyes, startling pale blue against brown skin, roved all over Sonny; the islander made no effort to pretend otherwise, and besides, Sonny could feel them. Their touch trickled over him like ice water, exciting every nerve he had, even those he’d never heard from before.

Which scared Sonny, a recluse by choice — and, he knew, because he’d always managed to be socially… well, clumsy. So, he turned to the weapon that had been his first line of defense since adolescence, when all the reservation had noticed that their star young grass dancer didn’t mind being gay: a smart mouth.

“What are you looking at?”

Even though the islander had responded by looking away, Sonny knew he hadn’t — couldn’t have — intimidated him. The stranger might have been a few inches shorter than him, but judging by his physique, and despite his laid-back manner, Sonny guessed the man could have dropped him with a cold look and a slap. It would have been less of a blow if he had. Instead, he freed his lower lip from his teeth and spoke.

“I beg your pardon.”

Sonny wanted to let a whole raft of words spill out, starting with “I didn’t mean it,” and ending with “so kiss me, now.” But the man’s attention had turned away. A baby in a stroller dropped a floppy brown bear at his feet. The young mother looked frazzled, at her wit’s end, carrying another child and trying to keep a third from making a dash down the boulevard. The islander squatted down — a graceful move — and picked up the bear. Right before Sonny’s eyes, his icy exterior melted, and though he didn’t smile and couldn’t pass for cheerful, he somehow seemed kind. He handed the stuffed creature back to the baby, who seemed to like him. She expressed her gratitude by spouting a number of syllables that all sounded a lot like “da.”

Sonny, angry with himself for blowing his chance to meet this chill but beautiful stranger — who might be trying to hide a kind heart — pretended he hadn’t seen. He turned his faux-stoic shoulder and walked away. A little shaky, perhaps; already sorry. Three strides and he heard a voice, unexpectedly scratchy, even hoarse.

The man took a deep, lovely breath, flashed his cold-fire eyes at Sonny, and said, “I have coffee most mornings at Margie’s. In case you’re interested.”

Margie’s it was, then, the very next day. Sonny had weighed the wisdom of that, thinking it might be better if he didn’t seem so anxious.

But hell, he thought, I am anxious. Nothing about me is un-anxious.

He took the truck — which his Uncle Melvern had left him when he died a year ago and which functioned as a good luck charm. After he pulled over to the curb a half-block from Margie’s, he forced the clutch to cooperate, wrestled the column shift into first, and shut the engine down. Sort of. It kicked and spluttered, backfired, and groaned to death. He really, really hoped that the man he had come to meet had not heard that. He wanted to make a good impression. He crashed his shoulder into the door to get out, slammed the door twice to shut it, then paused to look in the side-view mirror. Some other person spoke out of his mouth — or at least that’s how it felt.

The wooden sign attached over the arched brick entry said “Margie’s Cup O’ Gold,” but nobody ever called the cafe anything but just plain Margie’s. The elegant door — leaded glass set in oak panels — had been pushed open and held there with a shoe. All that stood between Sonny and whatever fate awaited him inside was a wooden screen door, the old-fashioned kind; it might have been there since the block was built in the 1890’s. He crossed the threshold wearing a smile for Margie, then reached back just in time to stop the screen from slamming behind him. “Hey, Marge,” he said, maybe not quite as loud as usual. He glanced around lazily, as if he weren’t looking for the man he’d come to think of as “the islander.” He didn’t see him. He let out a long breath that he must have been holding, wondering if he felt disappointed or relieved. He walked, casually he hoped, across the expanse of black and white parquet floor.

“Margie, usually people don’t give other people a hard time for being early.”

“Shush, Sonny Bly. What do you want? Never mind, I already know. You and your fancy coffees. What’s wrong with a good old-fashioned cuppa, eh? Now that young man that came in a little earlier — real nice-looking fella; I think you’d like him — now he just ordered coffee, black and sweet. There’s a man that knows what he likes, I say.”

She’d nearly finished making the latte by the time she stopped. That was one thing about a conversation with Margie. Sonny never worried about what to say, because he was pretty sure he’d never get a chance to say it. But this time she had him a little dumbfounded. She’d said, “that nice fella,” with a sly glance out of the corner of her eye. Sonny figured she was on to him, but he couldn’t decide whether that was good or bad.

She cleared up those muddy waters as soon as she handed over his latte. “He’s around the corner, dear. The last table. Don’t worry, you look fine.”

Which left Sonny absolutely certain he should have worried more about how he looked.

There he was, the islander. Same skin, same lips, eyes, even hair. Of course. But the rest of him was dressed in a posh business suit, a light gray summer fabric so finely tailored that he might have been born in it. “So why the getup?” Sonny asked.

“Ah,” the stranger remarked. “A way with words.”

He didn’t have to say that. Sonny was already giving his forehead a mental smack. He stared at his coffee for what seemed like, maybe, a hundred and twenty-four years. He’d all but decided to bid an embarrassed farewell and beat a retreat, when the islander spoke.

“I have to go to work in a while,” he said. When Sonny looked up he added, “That’s why the getup.” No smile went with the words, but his eyes danced, like they were laughing — or maybe teasing. He reached halfway across the tile-topped table, holding out his long-fingered, manicured hand.

Sonny stared at it.

The islander said, “I thought maybe introductions would be a good place to start. I’m Luki. Luki Vasquez.”

Embarrassed again, Sonny blushed, which — he knew from experience — made his off-brown skin look purple. But in an act of sheer bravery, he put his own dye-stained and calloused hand out and took hold of Luki’s. Somehow, what felt like gibberish came out sounding like his name. “Sonny James.”

Luki leaned back when the handshake was done, draped his left arm casually over the back of the chair… revealing a bit of leather strap that might be part of a shoulder holster and something sort of gun-shaped half hidden under his jacket.