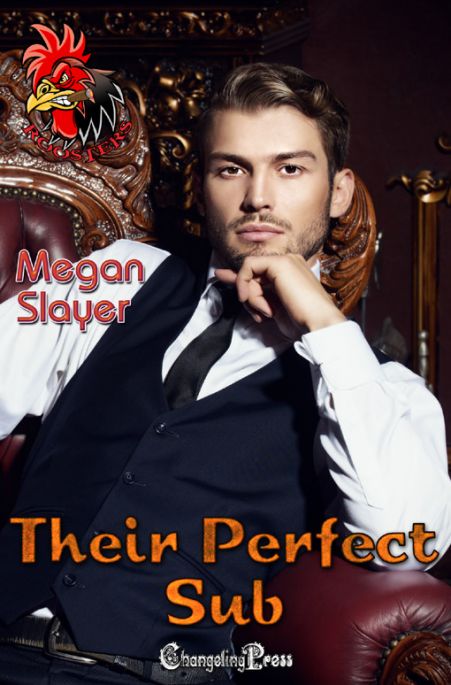 Clint Jordan has been the oddball in his family. He’s the oldest, but has no desire to run the family business. He’s in love with Ronan, despite his mother’s determination to find him a wife. Plus, he wants to share a sub with Ronan. Is there someone out there who can fit their needs and bring them together?

Zari’s running from a past that won’t go away. She needs stability and two men who will cherish her… while giving her a good paddling. When she meets Ronan and Clint, she’s convinced they’re meant to own her. Will these two committed men have space in their life for her?

Ronan got more than he bargained for when he became Clint’s lover. He’s not only with Clint, but he’s under the rule of the Jordan family. Once Zari enters the equation, he’s forced to admit his true feelings for Clint and accept what he needs from Zari. But things aren’t always the way they seem. Zari comes with baggage, and Clint’s determined to make the triad work. Will Ronan accept their terms or walk away?

“I hate waiting.” Clint Jordan sat on the edge of the sofa and debated how he wanted to present himself. He hated arguments with Ronan more than he detested waiting. A piece of his heart had ripped out when Ronan left. He wished they hadn’t shouted at each other. Ronan was his other half. Going to the office sucked without Ronan across the hallway. Moreover, he missed his sub.

Clint couldn’t sit still. He forced himself not to check the clock for the hundredth time. He didn’t regret taking part in the collaring ceremony with his brother Dashiell and Dash’s wife, Christy. The ceremony had been beautiful and sexy, and she’d only blown him while Dash fucked her.

But Clint hadn’t told Ronan about the ceremony.

Keeping quiet wasn’t smart, but not awful enough for him and Ronan to split. Christy would’ve been overwhelmed by having three cocks, and Dash wouldn’t have allowed Ronan to join in.

The door opened and Clint sat up straighter. He’d devoted the last two years to Ronan and needed him more than ever.

“Hi.” He wanted to move, but damn it, he couldn’t shake the tension. “Sit down.”

Only Ronan could have him this off-balance.

Ronan sat opposite him and said nothing.

Clint wasn’t sure where to start. “Do you know why you weren’t included in the ceremony?” He owed Ronan a better explanation than none.

“Got right to the point, didn’t you?” Ronan sighed. He now had dark circles under his brown eyes. He looked tired. His black hair needed to be brushed and he should have run an iron over his shirt. He hadn’t shaved in at least two days, and the dusting of hairs on his cheeks and chin added to his appeal. He stole Clint’s breath.

“We need to sort this out,” Clint said. “This is the only way.” No one could ever say he wasn’t blunt.

“We do.” Ronan leaned back in his seat. “I hate fighting.” The collar of his shirt hid the silver chain he always wore — the collar Clint had given him.

“Likewise.” Clint exhaled and swept his gaze over Ronan again. He wanted to kiss his lover and prove everything was all right. He also wanted to know Ronan hadn’t removed the collar. “I hate you’re upset and hate I caused it.”

The muscle in Ronan’s jaw tightened. “I know.”

“The reason they didn’t include you and I didn’t invite you along was Christy. Think about it. Doing three guys is a lot for anyone to take. Sure, some can, and others would love it, but after what she’s been through — the shit at the club, the guys taking advantage and her worthless so-called family — I didn’t have the heart to push. Until Dash rescued her, she’d been treated like garbage. If we’d all been there, she’d have thought Dash was no different. That’s not fair.”

“So? It’s expected at the club.” Ronan folded his arms. “We’ve watched tests of the subs where they’re expected to do more than that.”

Clint knew this game. Ronan wanted to make him hurt, too. “Hold up. I’ve never passed you around, and when I collared you, it was just us,” Clint murmured.

“Everyone does the ceremony in their own fashion. You never had to prove anything to me.”

“You joined in.” Ronan’s eyes blazed.

“Because I was asked.”

“And you couldn’t have mentioned it to me? Oh, hey, my brother wants me to do his old lady because he wants to collar her. Do you mind?” Ronan growled. “I might have minded.”

“You said no chicks.” Clint leaned on his elbows. “Dash wanted you to be at the wedding. He’d planned on you being one of his attendants. It killed me to go alone.”

“Yet you flew right off to Vegas and left me here.” Ronan shook his head. “I would’ve stayed in the damn hotel room.”

“I not only invited you, but I expected you to come along. You decided you were too… I believe you said sick, to come.” Clint lowered his tone, despite his overwhelming desire to scream. Shouting never solved anything. “My brother asked for me to join in. It wasn’t a slight to you. I honored his wishes. If he’d have said he wanted me to do more than witness, I might have hesitated, and I would’ve told you.”

Ronan rubbed his forehead, then flicked his hair out of his eyes. “I know.”

Clint paused. Ronan had confused him. “Is that why you’re angry? Tell me the whole truth.”