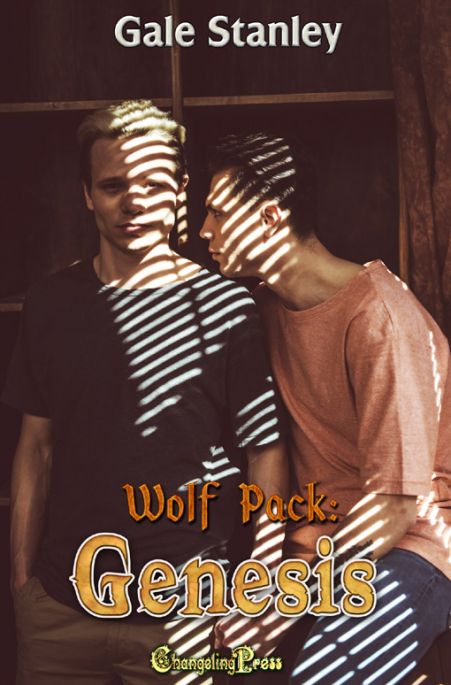 In the Agéli Lýkon Wolf Pack, there are two types of men, Alpha and omega. Since the knotting ceremony, the submissive Bleu has had no problem adjusting to his position as Grey’s human omega. Their love is strong and their bond is unbreakable. But when they reach out to help another Alpha, their relationship is put to the test.

Friday afternoon, and the wolves were ready to party. They never needed an excuse, but Lykos Stavros, the chapter president of Agéli Lýkon, had planned this celebration for a special reason. The new Alpha pledges had knotted with their human omegas and were now part of the Brotherhood. The omegas were accepted as well, although there were restrictions. They weren’t permitted to live in the fraternity house with their Alphas. Stavros had decided the omegas would be more useful as spies if they lived in the dorms.

The number of Alphas had increased quite a bit since Bleu became Grey’s omega two years ago when they were freshmen. Twenty-two Alphas now resided in the frat house. Stavros considered twenty-two a magic number because two symbolized dualities. The dual nature of the Alphas, wolf and man, was at the heart of the Brotherhood.

The increasing numbers elated Stavros, who didn’t want to reveal their existence until he had gathered many more of his kind. He feared human bigotry and prejudice would wipe out the small band of brothers. Bleu thought he was probably right.

Bleu’s last class had finished at three and he’d come straight to the frat house to help get things ready. The party room had wood paneling that made it look old and sophisticated, but it had everything the brothers needed for a good time. Leather couches provided seating. A wooden bar and a beer pong table filled most of the far wall. Another wall had shelves for a music system and a big screen TV.

Bleu checked the bar to make sure it was stocked. Everything looked ready and the guys were trickling in as their classes ended. Bleu and Grey filled Solo cups with Wolf Spirit Vodka and raised their glasses to a fun night.

“I’m tired of dancing. I think I’ll get another drink and sit this one out.”

“How about I find you another partner?” Grey waved over Aleksys Kosta, who’d been his big brother when he was a pledge. “Hey, Alek. Wanna dance with my omega while I get a drink?”

“Love to. Danny is already shit-faced and stumbling over his own feet.” Alek pushed his omega away and approached Bleu. Danny stared after him, a sullen expression on his face.

Alek grimaced. “Same old same old. Why can’t he live with me at the frat house? I don’t see him enough. I look at other men. It’s all bullshit.”

Grey smiled. “Do you remind him who’s boss?”

“Of course, but his answer to everything is alcohol.”

“Maybe I’ll keep him company at the bar.” Grey walked off.

Bleu stood silent and studied Alek. When Grey pledged, Alek had been Grey’s main source of friendship and support, and they’d been close friends ever since. They’d been lovers, too, but all that stopped when they bonded with their omegas. Bleu had a healthy sexual appetite and he fulfilled Grey’s desires eagerly. They didn’t need anyone else.

But Alek was incredibly attractive, with his thick brown hair and chiseled features, and behind that all-American frat boy look was a sexy, well-hung dominant. Bleu licked his lips. He wanted to woof at the moon. Then he remembered Grey and Danny, and he felt guilty.

Bleu didn’t know the other omega very well. They shared one class and Bleu had tried to befriend Danny, but it hadn’t gone well. Whenever Bleu tried to start a conversation, Danny replied with one-word answers. Bleu didn’t take offense. Danny treated everyone that way. Everyone but Alek.

Alek took Bleu by the hand. “You’re thinking too much. Let’s dance.”

He led Bleu to the center of the room where space had been cleared for dancing. Alek took Bleu in his arms and guided him around the floor. He was a seductive dancer, grinding his body against Bleu’s in time to the slow tempo. The press of Alek’s rock-hard dick against his thigh sent shivers up Bleu’s spine.

Alek pressed his palm to the small of Bleu’s back and pulled him closer. He ground his hips against Bleu’s. Heat curled in Bleu’s belly and he returned the movement. He felt Alek’s hand slip past the waistband of his boxer briefs, but he didn’t protest. Alek squeezed his cheeks and pulled Bleu closer still. Bleu felt giddy. Was it the alcohol, or the man he was dancing with?

Alek’s fingers traced Bleu’s crease as he kissed and sucked on Bleu’s neck. Bleu whimpered, suddenly afraid that he might come right there on the dance floor. He looked up at Alek, wide-eyed.

“You’re irresistible,” Alek whispered. “The way you look at me with those blue eyes…”

Bleu scanned the room for Grey. His Alpha had an arm around Danny, but he met Bleu’s eyes and smiled. Bleu settled back into Alek’s embrace and their bodies moved in unison, their cocks grinding together. Then Alek slid a finger inside Bleu’s hole.

Bleu uttered a high-pitched mewl and wiggled his hips.

“Oh, you are delicious,” Alek murmured.