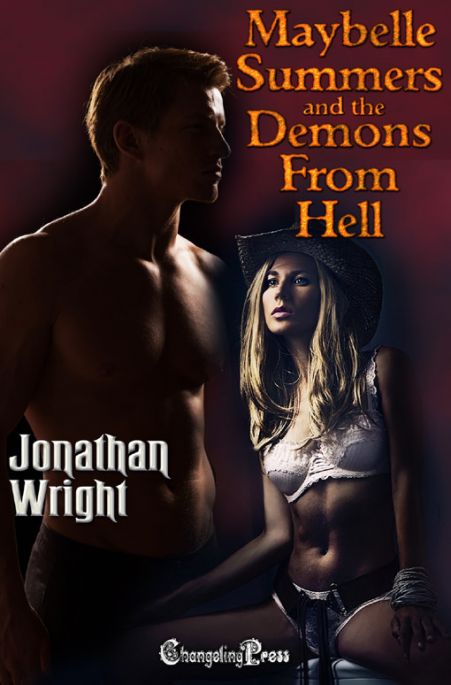 Maybelle Summers is a hot honey blond with a heart of gold and notably bad taste in men. That golden heart prompts her to make another in a long line of bad decisions — to wit borrowing money from one Burdette Hunter, the local crime boss.

Enter Quill, an Incubus sent to seduce Maybelle into giving up her soul to Satan. But like Maybelle, Quill sometimes makes bad decisions — like falling for Maybelle. And claiming her — but not for Satan.

Fortunately Maybelle’s equally head over heals for Quill. All of which sets Maybelle on a course that will put Burdette, his collectors (Bad Bob, Bo Williams and Lark Conner), and even Satan himself on her trail. Unfortunately — for Satan — Maybelle’s not really quite as human as she thought she was.

Sometimes even Satan’s past can catch up with him…

Two a.m. in Hollow Glen. Owls and crickets and Bad Bob — one of Burdette Hunter’s bill collectors, 6’ 5” and nothing but nasty. He kicked in the door to Maybelle’s trailer.

Another man, tall and lean, but nowhere near Bad Bob’s 6’ 5”, hung back in the shadows, waiting near the door.

Bob grunted, stooping a bit to get in the door, “Okay, Maybelle, I come to collect.”

Maybelle was still awake because thinking about the inevitable — in this case Bad Bob or an equivalent permutation — made sleep impossible. Having just erased the simple chalk design on her kitchen table after putting away the five little pink birthday candles and fussing about the melted wax, she shrank back, trying not to be lush and sensual, failing badly.

I wish for a hero and I get nothing. Typical. A complete waste of a pentagonal. She quickly wished hives and bad breath on the person who’d sold her the “self help” pamphlet, figuring she’d get similar results. “What, it takes two of you to break my fingers?”

Bob glanced around, frowning. “What? Don’t play games, bitch. Look, Burdette don’t want me to break nothin’. He just wants to talk.” Bob grinned like a gator, all bad teeth and naked hunger. “He told me I get to make sure you got all your workin’ parts in order.”

Maybelle expected Bob had exaggerated the flexibility of his own authority somewhat. Then she glanced at the other man, who stood quietly, watching. Hard face. Hard body. Hard eyes. She thought he said something, low and menacing.

Frying pan or the fire? She snarled at Bob. “I don’t have the money. Went for doctor bills for Miss Elma, down at the end of the street.” The street being the end of the dirt path folks around here called a road. “The medicine probably saved her life.” Probably nothing, it had. Maybelle got some degree of satisfaction from that.

Maybelle understood that better than a Nobel prize winning physicist understood gravity. Burdette wanted to fuck her, and own her, and not in a good way.

“Burdette says you can turn tricks. That body’s worth somethin’. Got to be sure, though.” He moved quicker than she expected and pinned her hot curves against the wall, which flexed alarmingly.

Sepulchral voice from the other. “So what’ll it be? Frying pan or the fire?”

Maybelle chose — having no choice — and screamed defiantly, “Fuck you!”

Bob would have laughed but instead sailed out the door. Hideous shapes snagged his screaming ass and disappeared into the night. His end did not bode well.

Maybelle gasped with shock, breathing heavily, heaving tits and flushed face. “What — what just happened?” She stared at the hard guy and trembled. “What’s goin’ on?”

“Nothing you need to know. Maybe best if you don’t.”

Maybelle didn’t like the sound of that. “He didn’t see you.” She trembled before his penetrating stare.

“Wouldn’t have liked it much if he had.”

That made her shiver. Christ, exactly the kind of guy I want and don’t need. And like that, her nipples got hard and her cunt got hot and wet and she started to tremble.

“What’s your price?” she asked in her patented hot-honey voice that meant she wanted to be fucked right now and which only seemed to manifest at really inconvenient times like this.

He looked her up and down. She saw his cock get big and hard in his pants. Major myth, that guys got hard from just looking at women. But there he stood, hard as a rock.

She smelled his male musk, like a drug to her libido. Her voice dropped an octave, into a husky whisper. “So — so you want to — you want my — body?”

Still nothing, unless one counted the discernible tightening of his jaw and the way his eyes narrowed. His hands flexed, opening and closing like he would use them to mold her body to his will.

She shivered again. “Okay. Yeah…” She stripped, not from fear but because she had come close to something very like death and he had saved her and she wanted him to see her nude body and know he could have her if he wanted. Afraid, yes. Very afraid. But getting more and more aroused under his flat stare. Jesus, even his eyes are quiet.

When she stood nude before him, he touched her, almost reverently, hard hands gently but confidently tracing the map of her raging hunger, the hunger she hated for the crappy men it brought into her life. She closed her eyes and moaned, then silently cursed herself for a slut.

“Quiet,” he commanded. “This time I’ll judge your worth.”

… this time… That scared the shit out of her, and made her screaming hungry for his cock. She leaned back against the flimsy wall and moaned again, unable to move except as his hands commanded. “Who are you?” she gasped, already on the edge of unending ecstasy.

“The fire.” His voice went deeper, making her tremble. “Your wish was simple, so the payment is simple. I take you.”