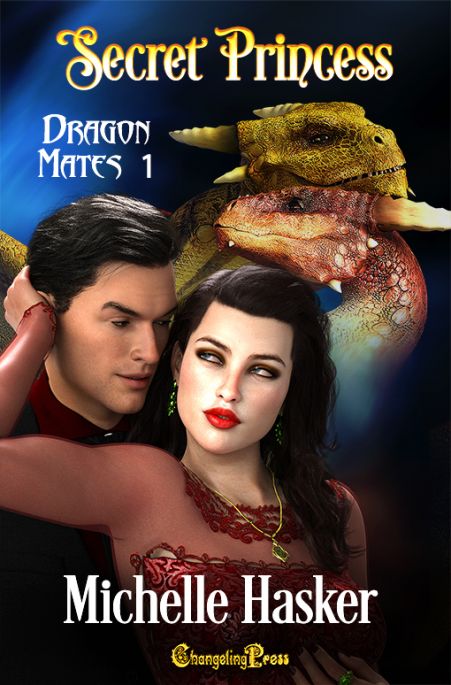 Posing as her best friend’s lover shouldn’t be a problem. At least that’s what Tonya tells herself — until she meets Michael’s twin brother Gabriel, and finds out just how hot fire dragons can burn.

It was wrong. Oh, so wrong. Burning in hell was the least of her problems. If Michael could see what Tonya was picturing the two of them doing right now, he’d toss a bucket of water on her. Her best friend would never look at her the same way again. Hell, she was worried about herself.

How insane was it that her inner dragon believed Michael was her soulmate? The fact that he was also a dragon didn’t mean they had to mate. She’d been around other dragons and not heard a peep from hers. Why, oh why, did her stupid dragon think that her best friend was her one true mate?

There were many who never even found their soulmates. She’d once wondered if she’d be one of them. But apparently her dragon was crazy. With her luck she’d already met hers and didn’t even know it. In the meantime, she’d been drinking buddies with Michael for years. Once he’d gotten her the job here, their friendship had evolved until she could honestly say he was her best friend. Hiding her crazy, lust-filled dragon from him was tiresome, though, and in the end she’d confided in him.

Tonya had been afraid to tell him in case it ruined their friendship, but he’d taken it better than she’d imagined. In fact, he seemed rather pleased that her dragon lusted over him. The man was an enigma, but in the end she decided it didn’t matter. Michael meant too much to her for her to walk away. Since he didn’t care when her dragon misbehaved, they were usually able to ignore her.

“Are you listening to anything I’ve said?” Michael waved his hand in front of her face and stared at her.

“God, Tonya, what is wrong with you today?” He stood up and crossed the room to look out the large window in his office.

“I know it’s not your dragon’s fault. I can sense when she’s acting up.”

“I think I’m still annoyed with your family. More than annoyed, I’m angry with them. None of them deserve you!”

Michael spun back around. “You aren’t going to back out, are you?”

“No!” She sat up straight and shook her head.

“Is your dragon still trying to convince you that I’m your soulmate?”

Tonya sighed and leaned back in the chair. She crossed her arms and her legs. “Yes. I’m so irritated. I’m positive she’s not even considering other men.”

“Don’t take this the wrong way, but I’m glad. Her interest in me is what I’m hoping on using to convince my parents and family that we’re a couple. If you’d found someone else I couldn’t take advantage of you this way.”

Tonya groaned. “Do you need to use words that could be construed in a sexual manner by my dragon?”

“Sorry,” he apologized, but Michael didn’t look even one tiny bit sorry. “But you have to admit that your confused dragon is going to make pulling off this ruse even easier.”

“And how are you going to get your dragon to cooperate?” Tonya stared at him. They were both silent for a long moment. “I still say your parents should love you for who you are, not what they want you to be.”

“I don’t want anyone in my family to know. Can’t let them know. You don’t understand.” Michael frowned, staring at her. “You have to promise not to say anything. I know how hard that’ll be for you, but I need you to do this for me. This is extremely important to me.”

“I know. That’s why I’m going along with this. You know I’ll do it for you. But not taking your asshole family down a peg or two might be impossible. You better not leave me alone with them. I can’t promise what will happen if you aren’t in the room.”

“You know I’ll owe you big for this, right?”

“No, you won’t. You’ve been keeping my secret for years so I think we’ll call this even.”

“I don’t think so.” He looked as if he was going to say something else but his office door opened, and they both turned as one to stare at who would have entered without knocking first.