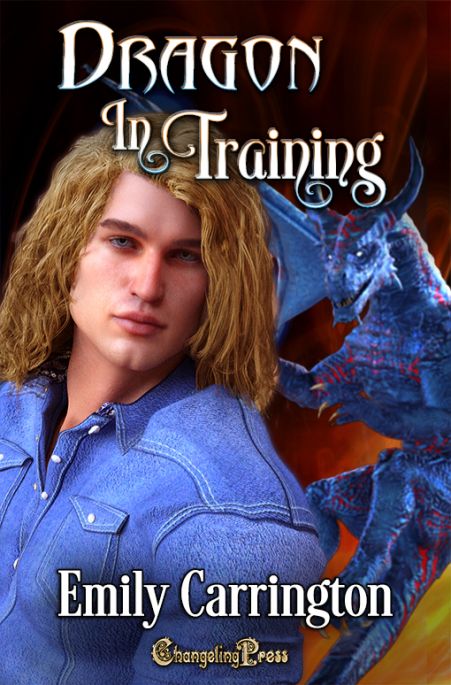 Dragon Food: Something is hunting along the Gulf coast of Florida, and Mark Tavery is tasked with finding it. His expertise in dragons is his pride, but he can’t say the same about his romantic relationships. When he picks up a lamp during his investigation, he’s shocked at his instant attraction to, and all-consuming need for, the genie inside. Mark’s greatest desire is to have Luke in his life and in his bed, but giving in to the promise in Luke’s touch means Mark runs the risk of killing the genie he loves.

Dragon Fire: Luke is a genie with almost limitless power, but it does him no good when his lover, Mark, won’t let him have the two things he really wants: for Mark to rely on him as an equal partner during magical conflicts, and to be dominated in bed. Will Luke ever get the chance to prove that he can be both strong in the field and the perfect submissive in the sack?

Dragon’s Bane: Atlas, a genie-god with nearly limitless power, has one task. He must find the modern equivalent of Cerberus and kill it. He discovers the three-headed dog’s incarnation are three figures that surround his current master — Dan’s current lover, Reese, Mark, a water dragon and Reese’s obsession, and Luke, Mark’s genie. Mark and Luke find their memories are altered and untrustworthy. One thing is clear: Only their love for each other can save them — and everyone at SearchLight — from Atlas completing his terrible final task.

Being trapped in a lamp for twenty years at a time wasn’t as unpleasant as it sounded. Damn lonely but not unpleasant. Luke, like all genies, was able to make his prison a palace, and as long as he kept busy, each time of confinement went swiftly. He’d been alive for over ten centuries; what was a score of years?

This stint was almost done. He went to the covered clock that hung on the other side of the room, walking easily with the almost imperceptible rocking of the lamp under his feet. His last mistress, after getting what she most wanted, had tossed his prison over the side of a boat, and he’d been forced to go with it.

He brushed the clock’s velvet curtain aside so he could study the face. The hands read April 2004, and he nodded. Almost twenty years had passed. His lamp would be picked up soon. Goddess, God, or fate always made it so.

Luke grabbed his wrists and stretched upward, wincing at the satisfying series of pops that walked up his back. “About time.” He shot a glance at his bookshelves. “This time, I’ll bring back more books.” He leaned backward and rolled into a handstand. Facing away from the clock now, he headed for his closet. Its doors slid back, disclosing outfits that reflected the many centuries of his existence. His first-meeting wear would never be current, but that didn’t matter; peacock behavior was for mortals.

He laughed. “Says the man who keeps almost everything he wears in any century.” He curled down into a crouch, then stood, shedding both boxers and T-shirt with two fluid movements. “Maybe a traditional genie turban…” Brushing clothes this way and that on the closet’s bar, he didn’t at first feel the summoning tingle that started at the roots of his hair. “Or a business suit?”

The tingling spread down to his neck and then out to both hands. Luke scrabbled for his boxers. “Wait! I’m not ready!”

“Use your magic, stupid,” spoke up Benji’s voice. His maker was long gone, but his voice seemed to always come at the best and worst times.

He laughed again and started to think himself into a pair of swimming trunks, but the summoning tingle encompassed his whole body. Naked, his own powers frozen for the moment of transport, he was sucked out of the lamp.

Well, he was definitely going to make an impression. He grinned inside himself like a fully risen sun. Best case scenario, his new master would be blind, and thus his nudity wouldn’t matter.

Transport complete, the tingling feeling receded. Hovering above the water like a leaf in an updraft, Luke gazed down at the man who treaded water below him. His new master’s eyes were hidden by what Luke assumed was a newfangled version of the scuba mask his last mistress had worn on occasion. Dark brown hair like bittersweet chocolate made little plastered curls on his forehead and neck, and his face was lightly tanned.

“Put some clothes on!” Benji all but screamed, and Luke snapped his fingers.

Swimming trunks appeared. He sank into the water, cradling the lamp under one arm to keep it from floating away. In the same breath, he buried his magic within himself, rather like covering a neon pink and spiky-bad haircut with a hat. Any other magical beings within a hundred meters of him would know where and what he was, but those farther away would have no idea he was here unless they were seeking his magic-signature specifically. Partial anonymity would help him focus on only his master.

His magic safely hidden away, he smiled at said master. “Hello, Master. My name is Luke.” That hadn’t been his name when Benji had made him a genie; he’d adopted the new name some hundred fifty years ago. He swam forward a few strokes, surreptitiously checking out their surroundings. A mostly empty beach was visible in the middle distance. Though he couldn’t be sure, he thought he might still be in the Gulf of Mexico, where his mistress had dropped him. The water was ocean-buoyant with salt, and calm. He hadn’t been summoned to save his master from drowning.

His master pushed up the mask, revealing blue eyes just a shade lighter than the water around them. He laughed, a deep, rough purr. “Whichever of my coworkers hired you, tell them you had me going for a minute, especially with the mirrors or whatever you used to appear naked in midair, but I’m not interested in any one-night stands.” He pulled the mask back down. “Oh, and tell them — whoever they are — that they don’t know my taste in men at all.” He struck out for shore.

That was the first frustrating part: convincing his new master that he was in possession of a genie. The second would come when Luke had to explain the rules. Well, soonest begun and all that.

Luke did another check of the beach. There were people there, but none of them seemed to be staring in their direction. They were alone out here in the water. He vanished, reappearing in midair before his master’s eyes. “Can you explain this?” He rolled over on his back, tipping his head back so he could look at the man in the water. “What’s your name, Master?” Not that it mattered. Masters and mistresses usually didn’t want you to use their name; it was just something to ask so the silence wouldn’t rush in. He hated silences. They were annoying.

Luke didn’t recognize that name, but it was apparently significant to his master.

“I don’t know how you’re doing this,” Mark said, “but there’s surely a trick of science involved.” He swam under Luke, who resisted the urge to roll over and keep him in view.

Mark passed his hands under Luke, not quite touching him.

He could feel the heat of those hands, and he wanted to move just enough to make the contact, however brief, skin to skin. Mark’s voice — steady like a professor’s but rough as if he used it as a weapon — called to all Luke had denied himself for far too long. This new master looked nothing like Jesse, but that somehow made Luke’s desire okay.

“Okay,” Mark said, “this is sophisticated.” He sounded intrigued. “What kind of technology?”

Luke turned over. “You’re a man of science?” Why couldn’t he run into someone who believed in anything and everything? No, that would be too easy.

“More or less.” Mark’s eyes shone like a mirage. Yes, he was intrigued. “Is this some new science?” His eyes flicked to Luke’s swim trunks. “You’re not hiding some kind of…” He shook his head, muttering, “Nothing’s that small, and this isn’t Star Trek.”

Not understanding the reference any more than he knew the meaning of SearchLight, Luke ignored it. If he had to know, he’d find out. “I promise, I’m not using any sort of scientific find to stay suspended up here.” He made his trunks disappear for a moment, waited until Mark’s jaw had dropped far enough and his cheeks had colored before poofing the trunks back into place. “See?” His gaze flicked down to the water, and he wondered if Mark was sporting an erection or if that was just the play of light on water.

“Yeah… I see.” Mark started for the beach again, tugging once, harshly, at his swim trunks. “Will you answer a question?” His voice was unsteady, but when he glanced over his shoulder, that gleam was still in his eyes.

Fighting the need to swim under Mark, maybe even touch him, Luke said, “Sure.” He sank back into the water and swam beside Mark. “You’re a little confused, right? Let me try to help. I’m a genie, and you rubbed my lamp.” He paused. Twenty years was too long to go without a tease or two. “Feel free to rub other things.”