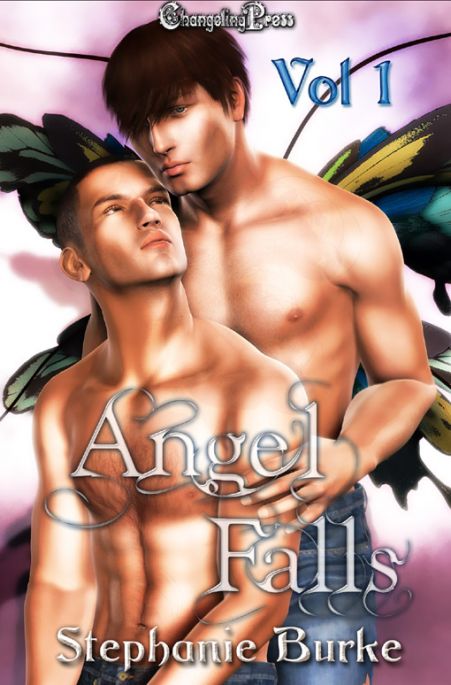 With the town of Angel Falls, Maryland, on their side,
broken wings will learn to fly once more.

Broken Wings: Angel, foundling turned NFL star quarterback, and Klintic, a Fae warrior prince, have both been tested in the fires of torment and anguish and managed to survive to find each other. That the ex-footballer and the betrayed prince manage to discover each other is a miracle. With the town of Angel Falls on their side, broken wings will learn to fly once more.

Snake: Snake’s lived a good, long life and is comfortable doing tattoos and body modifications in her shop. But when young Ethan comes to her, he opens more than memories to her past. He unleashes a love she could never have anticipated. A May/December relationship will never work, but with a little magic and the secrets held in the town of Angel Falls, maybe together they can give love a second chance.

Sunspots: Bryan Adams finally has a date with the man of his dreams — Winston Macapthy, RN, descendant of a sun god and a caracal shifter to boot. Finally the geeks are going to come out on top. But if Bryan’s less-than-perfect physique doesn’t put off the handsome shifter, then kidnapping, torture, and running for their lives might.

Or it may just be another perfect weekend… perfect for the small Maryland town of Angel Falls.

available in ebook and print

“I’ll get back with you in a few days, Rich,” he finally said, cutting off his agent.

“Good.” Rich sighed, as if knowing Angel wasn’t invested in the conversation at all. “I’ll wait till I hear from you.”

“All right.” Angel started to disconnect the call, but Rich’s voice stopped him.

“There’s some reporter sniffing around about a ‘where are they now’ piece, Angel. I told him to fuck off, but I have a feeling he’s not going to give up so easily.”

Great, Angel thought, cursing mentally as he thought of being hounded once more by a media who felt they had a right to put his pain on display. Apparently the pseudonym hadn’t been enough to keep him under the radar. “Thanks for the heads up,” he nearly growled at the phone. “But I think I’m safe here.”

“It’s damn hard to find you in that twisted, crazy zone where you currently reside.” His agent laughed. “I’d keep my eye out just in case. The reporter’s name is Jonathon Greely.”

“Thanks, Rich. And goodbye.”

Angel disconnected the call and moved deeper into the woods. He braved the trails regularly in a bid to exercise his injured knee and clear his head.

It hadn’t been easy getting to the point where he could feel connected with life again, but the exercise and the fresh air helped, as did the acceptance of the people who lived here. They could care less about who he was or what had happened to him — they just accepted him as a shy recluse who fit into a town already half occupied by shy recluses.

He was about to turn back home to stare at his computer screen again when he heard the screaming. It sounded like someone was stabbing a peacock with a pitchfork.

He turned toward the sound, his feet automatically moving him at a swift pace deeper into the woods, into a place he rarely visited. Before he reached its source, the screaming stopped.

“Damn,” he murmured, wondering what he would find when he got there. He had high hopes that whatever was attacking the poor creature had fled and that maybe the poor prey hadn’t died.

He’d just rounded a small copse of maple trees when he saw the body.

“Good God,” he gasped, looking around to see if whatever had savaged the poor man was still nearby.

And it was a man, wearing ripped pants and slashed boots. He was bare-chested save for a pair of ill-fitted costume wings attached to his back.

Moving around to the man’s head, Angel dropped to his knees and pulled what seemed like mountains of dyed hair out of his face, wondering what the green goo that covered him was. It was tacky, the consistency of drying paint, and it liberally splattered the poor man’s form.

But the man was breathing. When Angel pressed his fingers against his neck, he could feel the steady pulse beneath his soft, warm skin. The man wasn’t exactly pale. No, his skin tone was dusky with an olive tint. His body under the grime and fake wings was fit and muscular.

“Hey. Hey, buddy. Can you hear me?” Angel asked, tapping him on the face, not wanting to move him in case of injury. “Hey.”

He tapped the man again, looking around to find the cause of his injury. The ground wasn’t torn up as it would be if he’d been defending himself. The trees and even the grass in the small clearing remained undisturbed. Unless the man had been dropped out of a plane, Angel couldn’t see how he’d found his way onto his property wearing a set of wings…

“Wings,” he muttered, shaking his head. Maybe this was one of the citizens of Angel Falls. Maybe he was a geek who’d invented some kind of flying machine and had tried to test it, with disastrous results. It wasn’t the first time something like this had happened. A few years ago, an incident with a jet pack had torched a good half-acre of his land and the inventor, a fifteen-year-old boy who was way too young to be playing with jet fuel, broke a thumb on Angel’s property.

Angel reached for the wings and — “Damn it!” He quickly pulled his hand back as what felt like a hell of a lot of static electricity zapped his fingers.

Shaking his fingers, he again tried to get the man to respond. “Sir? Sir, can you hear me?”

He was about to give up on waking his avian visitor to call 911 when the man’s eyelids fluttered.

“Yeah,” Angel encouraged, speaking a little louder. “That’s it, buddy. Come on and open those eyes for me –“

The injured man’s eyes fluttered once more and then blinked open. His eyes — the color was shocking Angel nearly jumped back before he realized the solid black had to be contact lenses.

Calling himself all kinds of a fool, he moved in closer. “Hey? Buddy?”

“Slurred speech.” Angel spoke to himself, already reaching for his cell. This looked like it might be serious —

“Calm down, buddy –” Angel rested a hand on the man’s shoulder when he suddenly lurched as if to get up. “Hey!” But the man braced a hand on Angel’s shoulder and fought to rise.

Not wanting him to hurt himself more — brain injuries could be tricky, as his year in the NFL had taught him — Angel braced the man as he lurched to his feet. Suddenly he was looking up into a dark-eyed visage that was staring back at him.

The man was big, and for Angel to say that was telling. Angel himself stood at six feet seven inches tall, a formidable height for a quarterback, but this man — he had to be about a foot taller than Angel.

And as Angel stared, his mouth open in shock, his cell dangling unused from his hand, the man arched his back and the wings fluttered. Then, as Angel tried to figure out how the massive things were attached, there was a zap that felt like a milder form of that earlier static electricity, and the wings began to glow faintly…