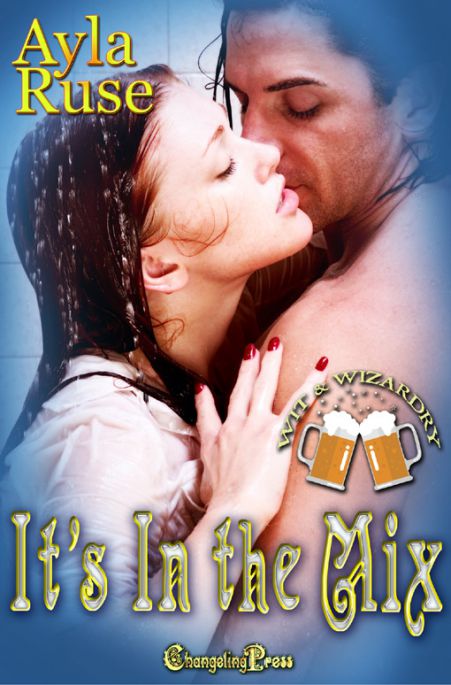 Asling is not happy to be tending bar in a human pub. Her fairy aunt predicted she’d find love by the next full moon, and that means she should be back in Ireland — not in the middle of Massachusetts.

Despite the happy married lives of his friends, Daniel is content to remain a bachelor. After all, the pretty new bartender may want to come home with him. Why spoil that with a relationship?

Something might have happened on its own, but a mischievous pub owner slips each of them a Wit & Wizardry brew known to contain a powerful love potion. Before either can say a word, Aisling and Daniel find themselves tumbling headlong into love.

Unfortunately, all is not happily ever after. Aisling does not want to love a human, and Daniel believes he’s unfairly pressured her into being with him. When the pair settle down to breathe, can they discover something deeper to bind them, or will daylight make the heady effects of a potioned brew fade away?

Dirv walked into the break room, looking down at his clipboard. A Russian leshy, Dirv ran the pub for the leprechaun Dunn brothers, owners of the Wit & Wizardry brewery. He was a tall, gnarled man of an indeterminate age, with long limbs and a nose to match. To see him grouchy meant he was having a good day, and she couldn’t imagine him being in love with anyone save the forests.

“I passed your sister, and the bar’s getting busy. Mitchell is ready for his break. You’d best get your winged ass out there.” He glanced up, and Aisling twisted her lips. “Don’t worry over the brews. I promised those trickster Dunns I wouldn’t sell them, and I won’t. Customs should come through tomorrow, then you can take it with you and begone.”

“That can’t come soon enough,” she muttered. Figured the man heard her.

“For me too. You think I appreciate my best bartender and waitress falling in love and running off, leaving me high and dry? It’s because of those blasted brews.” His bony hand pointed and shook toward the stacks of beer. “And you and your sister wouldn’t have to be working for me tonight. So don’t take it out on me, fairy. Take the blame out on those Dunns.”

Aisling had no idea why, but listening to the man rattle on, acting upset, amused her. He wasn’t truly mad, because he loved a good trick more than anyone else, but he also loved to gripe. “No problem, Dirv. I’ll head on out and tend bar for ya.”

Two hours later, Aisling had been asked her name so often she practically growled it out in answer. That or flat out ignored the question. She’d also been propositioned more than she had been in her entire life. She’d had to do her best not to gag whenever a human dared speak to her. All her senses were overloaded with smells of beer, food, human sweat, and the thick New England accent that jarred her ears. She wasn’t sure how much longer she could take it. Lena, her happy, peppy self, had checked on her a few times, for which Aisling was grateful, but her attention kept straying to the clock, counting down the minutes until she could take her own fifteen-minute break.

Aisling didn’t even bother looking up when the human leaned against the bar. She’d been hit on so often she mentally blocked all their talk. “What’cha be needing tonight?” she asked instead and swiped a damp cloth across the bar’s work surface.

She could have sworn he murmured the word, “you,” and her head shot up at that, but his warm smile told her she must have been mistaken. Once she looked up at him, though, she couldn’t look away. She should be disgusted at the mere presence of him, a human, but he had the perfect, classic dark Irish look — hair as black as the Hidden Fairy Caves, eyes as blue as the deepest reaches of the seaside springtime sky. To complete the package, even though he leaned against the bar, she knew when he stood straight he’d be tall and athletically lean. His face was chiseled, and he looked as if he’d fit in perfectly with the clans of old. For a brief second she even imagined him in a tartan. True, she didn’t care for humans, but she’d always loved the old stories of when fairy folk would interact openly with them. She would be the first to admit she’d not want those days back, but looking at him reminded her of the old lore, and she couldn’t help it. She sighed.

“Miss? Are you okay?” He grinned, and his deep voice shook her out of her musings.

“What? Oh, I’m sorry. You said you wanted… ?” She tried to focus. He gave her his order, but nothing registered because she was so caught up in simply listening to his voice.

“Hmm? Oh, um, forgive me.” She rubbed her temple as if she had a headache. The noise is getting to me, I think,” she lied and averted her eyes so she wouldn’t be looking at him. “Can you tell me again what you’d like?”

“Three house beers, please. I understand the Wit & Wizards aren’t available tonight?” He sounded amused, which both made her upset and made her blush. She didn’t like the dual feelings so she ignored both to focus on her temporary job.

She answered the man while pretending to work her cloth over a stubborn spot on the bar.

“You’d be right. There’s been a recall. It’s nothing bad. The taste was a little off. You know those Dunn Brothers. If something’s even a little off, they’re not happy.” Why was she rambling?

She stepped away to put distance between them and to pull the longnecks from the cooler below the bar.

“The Dunn Brothers. I don’t know them. Who are they?”

“Fascinating. I take it from your accent you know them well?”

“Wow. You’re straight from the source, so to speak. Being put to work here must be the very definition of excellent customer service.”

“Being put to work here is called punishment,” she muttered.

“Oh, never you mind. Nice to meet ya, Daniel.” She set the opened beers on the bar top at the same time as he reached for them. She allowed their hands to brush. Allowed because she’d kept a clear touching distance from the humans tonight. But with this man, something told her that she had to know what he felt like.

More from Ayla at Changeling Press…