Ice and snow are cold. Ice dragons are definitely not! 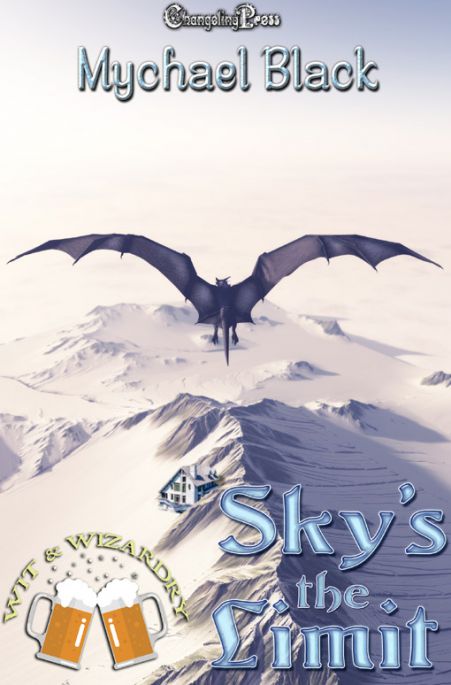 Despite his last name, Kelly Snow despises winter. He hates being cold and tromping through snow and ice. So, naturally, he’s called to inspect and catalogue a hermit’s vast library… in the mountains.

Dregan Stone has been around long enough to amass an enormous collection. Instead of gold and jewels, however, his hoard is made entirely of books — so many he’s lost track of what he actually has. He needs help getting his hoard organized, so a friend recommends a librarian.

Kelly and Dregan couldn’t be any more different, but neither man can deny the bizarre magnetic attraction between them. Dregan refuses to believe what it means, but that’s the least of his worries. What happens when Kelly discovers just what sort of man he’s working for?

Kelly stared out his driver side window at the cold, wet blanket with which he shared a name. Autumn, spring, summer — any would do. But winter? No, thanks! He sighed and got out of the car, nose wrinkling when his boot sank into at least five inches of snow. The wind had stopped blowing, thank God, but he swore the temperature had fallen a hundred degrees by the time he reached the huge house high in the mountains.

Actually, huge didn’t quite fit. More like… massive. Castle, maybe? Surely, it rivaled any mansion in the big cities. Brick walls towered over the circular driveway, windows lining them. The double entrance doors could easily fit six grown men in a row, with six more guys sitting on their shoulders. The whole place looked more like a house belonging to a fairy tale giant.

One of the doors opened, revealing an older man in classic butler dress. Kelly carried his laptop bag while pulling his wheeled suitcase behind him. When he reached the butler, the man smiled, breaking the stereotypical stoic demeanor.

“Good afternoon, Mr. Snow. Master Stone is awaiting you in his library.”

“Just Joseph, if you will.” Joseph gestured to himself. He took Kelly’s suitcase handle and stepped aside.

Kelly entered, his gaze caught immediately by the sweeping grand staircase dominating the foyer. It tapered up from the floor to a broad landing, then continued upward on either side. A statue of a dragon, of all things, stared down from the landing.

Joseph shut the door and walked around Kelly. “I will take your suitcase up to your room. Master Stone doesn’t like to be kept waiting. This way, please.”

Great. A stuck-up hardass for a client.

Joseph left Kelly’s suitcase at the foot of the steps and led Kelly off to the left. Halfway down the hall, he knocked on a door.

Kelly instantly recognized the deep, rumbling voice from the one he’d heard on the phone. A shiver moved up his spine.

Joseph opened the door and stood aside.

Kelly walked into the room, his jaw nearly hitting the floor. “Holy…”

The door shut quietly behind Kelly, leaving him alone with his new client.

Dregan Stone emerged from somewhere among the books. Dark hair touched his shoulders, and pale eyes reflected his stern expression. In any other circumstance, Kelly would’ve given anything to look his fill — or more. But Dregan Stone was a client, and no matter how fucking gorgeous, Kelly wasn’t about to cross that line.

“This is only one section of my library. I will show you the rest, but it is your job to organize it. I have business dealings I must attend to, so come along.”

Snapping himself out of a daze, Kelly followed silently. He would’ve at least shaken the man’s hand, but Stone seemed to be hyper-focused on work. So be it. Kelly could easily play along.

Stone pulled open a room divider to reveal what Kelly quickly realized was the bulk of the man’s book hoard. Three stories tall, and nearly as big as Kelly’s entire apartment, the library overflowed with books. There was no way in hell the man owned forty thousand books. Kelly would bet his life’s savings there were at least half a million books stacked, piled, shelved, and scattered on every available surface.

“You will begin work promptly at six every morning,” Stone said, intruding on Kelly’s awe-struck, reverent silence. “We break at noon exactly for lunch. Then resume until dinner at seven in the evening. I have a business to run, so I will not be available to assist you with the library. Do you have any questions?”

Kelly glanced at his hot-but-grouchily-stoic client. “When do I start?”

“Good.” Kelly entered the library, laptop bag sliding off his shoulder. “I will see you for dinner then.”

Stone nodded once and left Kelly to it.