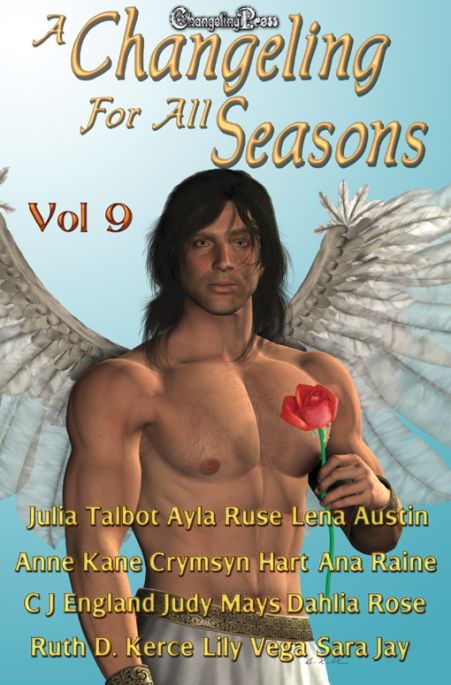 Thirteen tales of Christmas Magic from your favorite Changeling authors!

Ayla Ruse — Racing Wild: A wild race can lead to anything — even love.

Ruth D. Kerce — Christmas Cowboy: Chaz breeds horses. What’s a cowboy supposed to do with a herd of reindeer?

Dahlia Rose — Silver Bells: Tia was the sexy little elf that made Danny Grinch’s Christmas that much hotter.

Lena Austin — Ghosting: Ghost hunting means sometimes you find a ghost you weren’t expecting, when you aren’t even looking.

Julia Talbot — Merry X-Moose: Can a were-moose and a Santa-obsessed Elf fall in love — and save Christmas at the same time?

Ana Raine — White Stag: When the scent of peppermint reaches his nose Crane knows he has to remember or lose it all forever.

Get it Today at Changeling Press
Also available in print

“Seriously, Laird, you’ve lost your mind,” Laiyde said. His sister didn’t pull any punches, even with him being the head of sleigh engineering. “You do remember eight tiny reindeer, right? There’s no way Santa’s team can pull the sleigh with the extra weight you’re proposing.”

“He’s not getting any younger, Lai. Santa needs protection. This little cockpit is nothing. Hell, if Rudolph would just go full time…”

“Rudolph retired to Finland after you created that LED beam, remember?” She rolled her eyes, dark brown like his. They were twins, but thankfully she couldn’t grow a full beard like he did. That would be awkward.

“Right.” Shit. “Well, there are always a hundred young bucks competing at the reindeer games. Just get Sparkle to add two more to the team.”

His sister threw up her hands. “Just add two more. Like it’s that easy! Santa has used the same harness since the fifties! One extra attachment was added then for Rudolph. You can’t just change the whole of Christmas history every year!”

“Hey, I just want him to be safe.” Santa had slipped and damned near fallen off a house last year pulling a package out of the back of the sleigh. Laird thought about the implications of losing Santa and wanted to throw up.

“We all do. You’re going to have to redesign.” She patted his arm. “Talk to the magic team. See if they can make a bubble or something.”

“I did. They can’t make my dome lose any weight, even though they say they can equalize the pressure and keep flight horizontal without loss of velocity and altitude. Best they can do.”

“Anything for you, Bro.”

“Cool. Give me an hour to go talk to Sparkle and you’re on.”

She rolled her eyes again, but didn’t say anything. She just waved him off.

Laird pulled his parka on over his flannel shirt and snow pants. While Christmas Elves were well suited to the cold climate, this time of year was brutal. The toymakers and cobblers and all never went outside right now. They had long breezeways between their dorms and the workshops.

The rest of them had to brave freezing their balls off.

He trundled down to the reindeer barns, where he knew Captain Sparkle would be putting the chosen eight through their paces. The pulling reindeer had to bulk up as much as possible between now and the big day, and they all had to learn emergency procedures and weather contingencies.

He stomped snow off his boots once he got to the barn offices, the wind howling behind him when he slammed the door shut.

“Shit, it’s colder than a well-digger’s ass out there,” he mumbled.

“I imagine that’s colder than a witch’s tit.”

Laird whirled around to face the guy who’d just walked up behind him. Then he grinned. “Depends on if it’s in a brass bra.”

“Mmm. What about a sleigh reindeer in a snowstorm’s balls?” the guy asked.

“Nothing is colder than that,” Laird said. “There’s too much ether to fight.”

“New guy, huh?” He smiled. New guys were few and far between. Bruiser was an amazing newcomer, taller than Elves, even, and contrary to myth, Santa’s Elves were way more Tolkien than Oompa Loompa. This guy was all leg, lanky and surprisingly tanned, with a shock of dark hair. Dark brown eyes shone with humor.