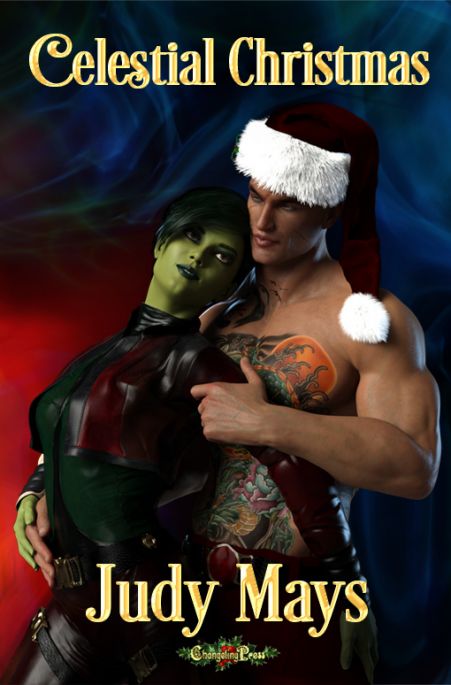 Princess Jami of Mediria is determined to give her adopted sister Brianna of Earth a Christmas to remember, even though she’d never heard of the holiday before Brianna described it so longingly. Descending on the snowy estate of the Alalakan clan, Jami plans the surprise celebration.

Alalakan don al’ Marcadras wants nothing more than to be left alone. Years ago he foiled a plot by the woman he loved to murder Mediria’s king. Gravely injured and scarred for life, he retreated to this isolated estate.

Marc’s desire for peace and quiet is pitted against Jami’s insistence on duplicating Earth’s festivities. Nothing Marc can say or do will distract her, not even seducing her. The hot sex they share only further inspires her to make this the best Alalakan Christmas party ever.

Unfortunately, not everyone on the estate gets in the holiday spirit. Some see a Medirian princess’s presence as an opportunity of another sort… The Medirian royal family will pay a great deal of money to get their princess back.

“There’s a message from Rodane.”

Looking up, Alalakan don al’ Marcadras, rolled his shoulders. He’d spent the last four hours after dinner hunched over the workstation in his study trying to finish the estate’s yearly reports. After flexing his fingers, he accepted the tablet the housekeeper handed to him, tapped in his code, and perused the message. Then he read it more carefully. Muttering some obscenities under his breath, he looked at the woman standing before him. “We’re going to have guests.”

Before he could finish, she smiled broadly and interrupted him. “Ban’s coming? That’s wonderful.”

Setting the tablet on his desk, he said, “Control your libido, Irinia. A Medirian princess is coming with him, which means at least one Aradab, maybe more, will be coming too as her body guard.”

“A Medirian princess? Ban didn’t get married, did he?”

Marc shook his head. What was it that made almost every woman in the galaxy want to jump in bed with his second cousin? “No, Ban is not married. He says it’s one of his cousins.”

“Which one of his many aunts and uncles is the parent? What does she want here? No one ever visits at this time of the year. Everyone is exhausted from the crafters’ trade show. The chalet hasn’t been properly cleaned in a month, and I don’t know if any of the rooms are suitable for guests.” The woman straightened, crossed her arms over her breasts. “I am not going to wait hand and foot on a spoiled princess who was bored at home and decided to have an adventure in some Drakian mountains.”

Marc grimaced. “I don’t know which aunt or uncle her father or mother is, and I don’t expect you to cater to her beyond what would normally be expected of you, Irinia. You have enough to do in this monstrosity of a house as it is. The princess will just have to amuse herself. If she’s not happy with the accommodations, she can just go home again.” He did raise an eyebrow. “Though I know you well enough to know if there’s one speck of dust in any of the rooms right now, you’d have the servants working nonstop until everything was clean enough to eat off of.”

The housekeeper ignored his last comment. “Why would Ban even bring her here?”
“You know Ban. Once he gets something into his head… He is very fond of all his younger cousins. What’s more, he did get the okay from Rodane so it’s not like he’s showing up with her unannounced or without the family’s knowledge.”

Another grimace. “I don’t want a spoiled child under my feet any more than you do, but it doesn’t look as if we have any choice in the matter.”

“I’m guessing between twelve and fourteen. Can you imagine a grown Medirian woman wanting to come here at this time of the year?” Marc said with a shrug.

She pursed her lips. “You’re right. With the weather getting colder, she’ll have to stay almost exclusively in the chalet. The water in the lake is freezing so she won’t want to swim there. I think I’ll turn down the temperature for the indoor pool’s heating system. If it’s cold enough, she’ll want to head back to Mediria’s tropical waters as soon as she can.”

“You lower the temperature too much, and you’ll kill the fish. Then you’ll not only have to deal with me but also with my great-aunt. Jenetta will not be happy if her prized opodia fish die.”

Marc could see Irinia weighing the prospect of Jenetta’s anger against any inconvenience brought about by the princess. He knew the moment she decided Jenetta’s ire would be far worse than dealing with one Medirian princess. “When are they arriving?” she asked in a disgruntled voice.

A loud humming noise from outside answered for him. “Sounds like they’re here now. Leave it to Ban to arrive this late at night,” he said. Stepping around his desk, he grasped Irinia’s upper arm before she could exit the room. “I expect you to treat the princess with the utmost respect. The ties between the Hardan and Alalakan families are strong and numerous. I don’t want you to ignore your regular duties because the princess demands something unusual or bizarre, but I will not have any reasonable requests denied. Are we clear about that?”

“Marc! When have I ever been unreasonable?”

“More times than I can count, hence the warning. Besides, you don’t want to disappoint Ban, do you? For all we know, this is his favorite cousin.”

Releasing her arm, Marc chuckled to himself as he strode out the door and headed for the chalet’s landing pad. Although normally even-tempered and genial, Irinia could be a real harridan when she wanted. Invoking Ban’s name would make her think before she did anything the princess would find too infuriating.

On the landing pad, the door of the shuttlecraft was just rising when Marc and the housekeeper arrived. Once the door was braced, the stairway extended. Bandalardrac stuck his head out of the doorway, grinned, and made his way down to the platform.

“Marc! It’s good to see you.” Pivoting away from his Alalakan cousin, he grabbed the housekeeper in an exuberant hug. “Irinia, are you still here? I thought you’d have married some complacent merchant by now and gone off to rule his household!”

“As if I wanted to marry again — unless you’re asking. Besides, I have yet to meet the merchant who can handle me!”

Laughing, Ban set her on her feet and turned back to the hovercraft. “Jami? Are you coming? You’re the one who was in such a hurry to get here!”

“I’m coming!” a musical voice shouted. “I needed to get my coat. That’s a cold wind howling through the hatchway!”

Marc smiled to himself. If she was already complaining about the cold, she wouldn’t last here too long. Then things would get back to normal. Pasting a smile on his face, he waited for whom he was sure would be a prepubescent girl. He wasn’t prepared for the vision wearing a coat that fit like a second skin over her curvaceous body. A sharp gust of wind blew her short, dark-green hair into her face. Combing it away with her left hand, she bit her full, lower lip as she grabbed the hand railing. Hurrying down the steps, she halted in front of him. This was no child. This was a very attractive woman.

Marc cursed silently to himself. Just what he needed, another sexy Medirian woman confounding his life.

“Jami, my cousin Alalakan don al’ Marcadras, manager of the chalet and its grounds, and the housekeeper Sililurtria dem al’ Irinia. Marc, Irinia, this is Jami…”

“Her Royal Highness Jamilinlalissa, Princess Hardan,” intoned a harsh voice from the top of the stairway.

As Irinia gasped, Marc stiffened. Jamilinlalissa? If his memory was correct, she was one of the king’s daughters! He’d expected the daughter of one of Findal’s many brothers or sisters, not someone who could possibly inherit the throne. Then, all thoughts of the princess fled his mind as he focused on the Aradab descending the stairs. Kahn? The Master of the Medirian School of Assassins. What in the seven hells did he want here? Marc had made it plain to all of the instructors that he was through with his training. He certainly wasn’t the first person to have left the school.

Ignoring the cold wind, his arms crossed over his bare chest, the Aradab halted and stared at Marc as if to issue a silent challenge.

Before he could stop himself, Marc clenched his fists. He hadn’t seen Kahn since he’d left Mediria seven years ago, and he wasn’t happy to see him now.

Irinia’s sudden cough shook Marc from his dark thoughts, and he hastily gathered his composure. “Irinia, why don’t you go in and get something warm for our guests to drink?” That should give her time to regain her poise. Entertaining the daughter of a king was not the norm here.

The housekeeper hurried back into the chalet.

Marc watched her go. Now, all he had to do was control his own reactions to his guests.

Ban clicked a button on the control he held in his hand. After the stairs folded neatly back into the hovercraft, the door slowly lowered into place. “Is there anybody to bring in the luggage, or will we have to tote it ourselves?” Ban asked in a cheerful voice.

Sexier than a Hollywood starlet! More buxom than a Vegas showgirl. Able to split infinitives with a single key stroke!

Look! At the computer!
It’s a programmer!
It’s a computer nerd!
No! It’s – Judy Mays!

Visit her website at http://www.JudyMays.com or join her reader’s group at http://groups.yahoo.com/group/judymays