Krampus has to get with the holiday attitude or lose all that he holds dear.
Bah, Humbug! 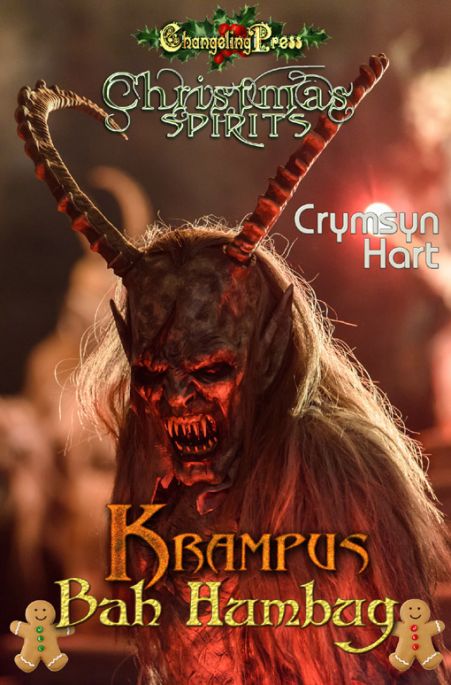 When Krampus gets called to help find a missing Incarnation, he finds himself in over his head. It takes a little bit of magic and a help from a couple friends to win the day. More than one surprise looms that will turn his whole world upside down. Krampus has to get with the holiday attitude or lose all that he holds dear.

Krampus glanced up over Emerald’s horns into the dark form of Nyx, the Incarnation of Night. Her black dress illuminated in a starburst pattern. The remains of the comet flew across her chest and down her dress until it disappeared. Her silver hair hung in waves around her back. She took a seat on a kitchen stool and picked up one of the undecorated gingerbread men. Nyx broke off one of its arms and a muffled scream from the dough filled the kitchen. “These are good.”

Emerald straightened up and wiped her hands on her apron. Krampus slung his arm around her and kissed her, tasting the nutmeg and vanilla on her lips. He trailed his fingers through her hair and over her small horns until she squirmed. He couldn’t get enough of her no matter where they were or what she was doing. If he didn’t need to prepare for his holiday duties, he would’ve spent every moment he could fucking her. Krampus broke the kiss, leaving his wife breathless as Emerald moved out of the way for him to get at the dough. She was having a rough time rolling out on this batch.

Krampus rolled up his sleeves and latched onto the wooden handles of the two-foot marble rolling pin. The brown dough quivered as it tried to get away, but he pressed down and rolled it into submission.

“What do you want, Nyx?” Krampus asked.

Emerald went over to their guest and sat on her lap. Nyx — along with several other Incarnations — had been welcomed into their bed over the past few months. Nyx slid her hand along Emerald’s face and met her lips. Krampus tore his gaze away from them making out. Knowing that Emerald enjoying being with others in their bed made it all worthwhile. She didn’t get jealous when he slept with someone else. She knew he always came back to her.

“Your lips taste like cinnamon, Em,” Nyx crooned. “How about we get upstairs and take advantage of the alone time?” She skated her hand under Emerald’s dress.
“That’d be nice.”

“What alone time? Nyx, you’re not here just to enjoy our flesh. Why are you here?” Krampus pounded the rolling pin down on the dough.

His wife moaned when Nyx stopped her caresses. “Right, business first. Pleasure later. Your help has been requested.”

He rolled his eyes. “Not this again. It’s getting close to Christmas. I have things to do and a lot of new bells to forge. A lot of naughty children have cropped up this year, and I’m particularly hungry for flesh that doesn’t come from my farm. The human meat I have here is a bit lean for my taste. The children are all fattening up while they wait for the Claus and baking him cookies.” He gritted his teeth as he thought about his arch nemesis. He might have rescued him and the Mrs. one time, but that didn’t mean all things were kosher between them. Although, he did make Claus promise to visit Emerald since she had nothing to do with their rivalry.

“Sorry, Krampus. They asked for you specifically. They’ve done me a few favors in the past. I couldn’t turn them down.” Nyx got up.

Emerald came back behind the counter and began mixing up another batch of gingerbread, so they could fix some of the older ones whose crumbs littered the house. Sometimes the older ones got a bit ornery and hungry and ate the newer ones. The cannibal gingers were a part of his special creation, but they listened well and got along with the tin soldiers and nutcrackers who kept guard on his property.

“Come on, Clo. You enjoy helping people. You just hide behind that gruff exterior. Big and scary with the horns. The clomping around of your hooves as you chase those poor children,” Emerald joked.

He licked his lips when he thought about the children he would catch. “It’s not just children, love. You know I bring back men, too.”

Emerald made a disgusted face and poured the flour into the mixing bowl. “That’s all you. I’m not into eating human. Remember, I was human until I was cursed because a certain god didn’t like what I told him in the cards.”

Krampus slapped her ass. “You are beautiful with horns or without. Nyx, who am I supposed to be helping now?”

Crymsyn Hart is a National Bestselling author of over eighty paranormal romance and horror novels. Her experiences as a psychic and ghostly encounters have given her a lot of material to use in her books. Vampires, grim reapers, shifters, and other paranormal creatures tend to end up in her books no matter how hard she tries to keep them away.

She currently resides in Charlotte, NC with her hubby and her three dogs. If she’s not writing, she’s curled up with the dogs watching a good horror movie or off with friends.

To find out more about Crymsyn, check out her website on: www.crymsynhart.com