I’m not the kind of man to give a woman a fairy tale ending.
But for Rin, I’m willing to try. 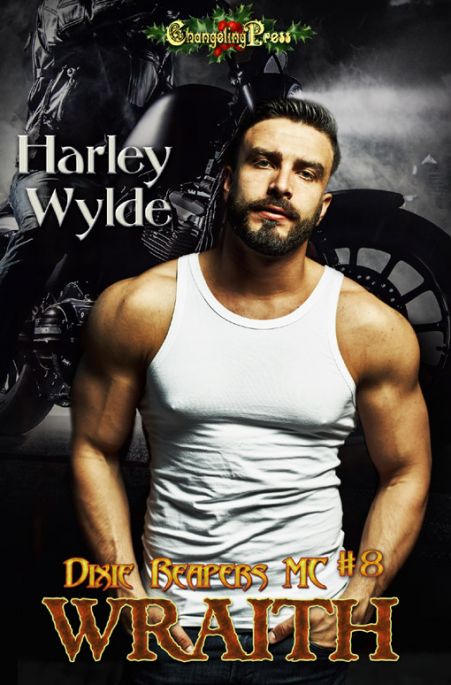 Rin — My mom died when I was little, and my dad followed when I was fifteen. My half-brother, the nastiest human being I’ve ever met, convinced people to grant him custody. More likely he bribed people. My life has been hell since then. Every time I try to run, he finds me, tortures me, and makes sure I toe the line. This time will be different. I’m asking the Dixie Reapers for help. If they turn me away, I’m as good as dead, but even that’s preferable to what my half-brother has planned for me next.

I didn’t count on the sexy man with the dark, brooding eyes. The man who defended me only seconds after laying eyes on me. The man who makes me want things I’ve never wanted before. I knew better than to sleep with him, knew I wasn’t good enough. When he rejects me, I run. Discovering several weeks later that he left a little part of himself inside of me is even more terrifying than my half-brother finding me.

Wraith — I’m not the settling down type. Maybe once upon a time, but not anymore. While I was serving overseas, my sister was left for dead in a gutter. I failed her. Failed my parents, who made me promise to protect her before they breathed their last. Now I’m faced with Rin, the strongest, most beautiful woman I’ve ever met. She needs a protector, and I’ll gladly be that for her. I want her. Want to keep her and make her mine. I’ve fucked my share of women over the years, but I’ve never made love to one. Until her. But I’m no good for her, or anyone else. She thinks she’s not worthy of me, but it’s the other way around. Then she runs and I feel like a piece of my soul has been ripped out. Finding her won’t be easy, but I won’t stop until she’s back in my home, in my bed. And I’ll make sure that every asshole who ever laid a hand on her is buried six feet under or rotting in prison. No one will ever hurt her again.

It never occurred to me that I would be the asshole to hurt her. I stopped believing in Christmas miracles a long time ago, but now I really need one. I need Rin back, and I’ll do anything to make her mine.

Pre-Order at Amazon, B&N, iTunes, and Kobo for December 7th

Approaching the gates, I rubbed my hands up and down my denim-clad thighs. I shivered in the cold air despite the sun shining brightly. It might be the south, but it was also five weeks until Christmas and cold as hell. Thanksgiving had passed just two days ago, and the weather had changed drastically almost overnight. My threadbare coat didn’t provide much protection as the wind whipped my hair around me and sent icy chills down my body. A man was leaning against a booth near the gate, and when I approached, he straightened to a rather imposing height. Then again, I was barely five feet tall, so pretty everyone was taller than me.

I didn’t recognize him, but I did know the look he had in his eyes. It was the same one I saw every time my brother had introduced me to someone he deemed important. I hated that fucking look, but I bit my tongue because I needed help, and I’d do almost anything to escape my brother. It’s not like this guy would ask me for something I hadn’t been forced to do already.

“I need to see Johnny or Kayla,” I said as I stopped in front of the gate.

His gaze took me in from head to toe. “Are they expecting you?”

He stared at me for what felt like forever before opening the gate. As I stepped inside, his hand closed around my arm and he drew me to a halt.

“Need to check you for weapons,” he said with a leer.

Yeah. I just bet he did. I spread my arms out, even though it made me colder. His hands went under my coat and lingered a little too long at my breasts before working down my body. When he pushed my legs apart and brought them up the insides of my thighs, I clamped my legs shut before he could go too high.

“Have to check everywhere,” he said.

“Robby, what the fuck are you doing?” a man asked as he came toward us.

“She asked to see Kayla and Saint. Making sure she’s not carrying any weapons,” Robby said.

The guy eyed me up and down and shook his head.

“First of all, Preacher isn’t letting an unknown person anywhere near his wife and kids. Second, if you think Saint can’t handle a tiny-ass woman like her, I’ll be happy to let him know it.”

The man I now knew was called Gears held out a hand to me. And from that little bit of conversation, it seemed Johnny was now known as Saint. It fit him. Even back in high school, he’d tried to save people. I was counting on that, hoping he’d be willing to save me too.

“Come on, darlin’. Let’s get you out of this cold weather and I’ll find Saint for you,” the man called Gears said.

“Thank you,” I mumbled, trying to stop my teeth from chattering.

He led me up the steps of a building across the lot and held the door open for me. Heat made my cheeks sting and it felt like thousands of needles were stabbing me as my body adjusted to the toasty air. Gears led me over to a small table near the bar and pulled out a chair for me.

“Sit here and I’ll see where Saint is. Who do I tell him is here?”

“Rin. From the old neighborhood,” I said.

He nodded and went to the other side of the room before pulling out his phone. I couldn’t hear anything he said, but he cast a few glances my way. While I waited for him to come back, I surveyed the area. I’d always wondered what the Dixie Reapers compound looked like from inside the fence. This building wasn’t quite the way I’d pictured it, and I could imagine a lot of wild parties within the walls. I knew those parties had never used the girls my brother pimped out, though, so whatever women hooked up with the men here did so of their own free will.

The door opened again and two more men came in wearing the leather vests all the bikers wore around town. One in particular drew my attention. His hair was dark, and he had a beard that made me itch to feel it, see if it was as soft as it looked. But his eyes were hard, the kind of eyes I’d seen on soldiers and men who had killed for a living. He moved with lethal grace and came to tower over me. I’d learned long ago to let my shoulders droop a little and hunch a bit to seem smaller when confronted with large, scary men.

“Who the fuck are you?” the man next to him asked.

My gaze jerked over to him and widened a little. The man was huge and more than just a little intimidating.

“No outsiders allowed,” he said. “If you’re here to party, you’re shit out of luck. It’s family time until the holidays. Whores can come back after the new year.”

I swallowed hard and lowered my gaze. Of course he’d call me that. It’s what my brother had made me, and I struggled to get up. I couldn’t seem to make my legs work quite right, those prickling needles still stabbing me as my body thawed out, and I kept falling back into the chair.

“Why are you here?” the other man asked, his tone softer.

“Does it matter, Wraith?” the bigger man asked. “She’s trespassing.”

I heard Gears come up behind me. “She’s looking for Saint, but he’s not answering his phone, and no one has seen him. Even Preacher and Kayla don’t know where he is.”

“Why do you want to see Saint?” Wraith asked.

“I need help. We went to high school together. I knew…” I stopped and looked at each of them. “I knew that Kayla escaped our neighborhood and that she was living here. I thought maybe the twins could keep me safe.”

Wraith hunkered down in front of me, his gaze assessing. “Safe from what?”

“My brother,” I said softly. “Half-brother. He’s not a nice man and he… he plans to sell me to a brothel in Mexico. I overheard him on the phone.”

“Son of a bitch,” Gears muttered. “I knew you looked familiar.”

My eyes widened as I looked up at him. He knew who I was? Who my brother was? Did that mean he would help, or would they ask me to leave? My heart started to race and my hands clenched. If they kicked me out, I had nowhere else to go.

“How do you know her?” the big, scary man asked.

“She’s Joe Banner’s sister,” Gears said. “She’s the one Officer Daniels was worried about. Tank, we can’t send her back out there.”

“Officer Daniels talked to you about me?” I asked, my brow furrowed. That didn’t make any sense. Why would he come to them?

“Who is Joe Banner?” Wraith asked.

“The local pimp. He runs things on the other end of town,” Gears said.

I wanted to curl into myself and disappear, especially when Wraith focused on me again. I’d never felt so dirty or ashamed as I did in that moment. A gorgeous man like him wouldn’t want to be near someone tainted like me. I would have tried standing again, but he was too close. I wouldn’t be able to get up without touching him.

“You work for your brother?” Wraith asked.

Tears burned my eyes but I refused to let them fall as I nodded.

“Told you she was a whore,” Tank said.

Wraith pushed my hair behind my ear and forced me to look at him. “You work for him willingly? Or does he have some sort of hold over you?”

“He was my guardian until I turned eighteen, but every time I try to run, he finds me. This was my last chance to get away. I don’t…” I swallowed hard. “I never wanted to work for him. I didn’t ask for any of those things to be done to me, but I wasn’t given a choice.”

“She’s not a whore, Tank,” Wraith said as he stood. “She’s a victim. You going to turn your back on a woman in need?”