I’ve accepted my mate and my leopard.
Can we protect our female from the evil pulling us apart? 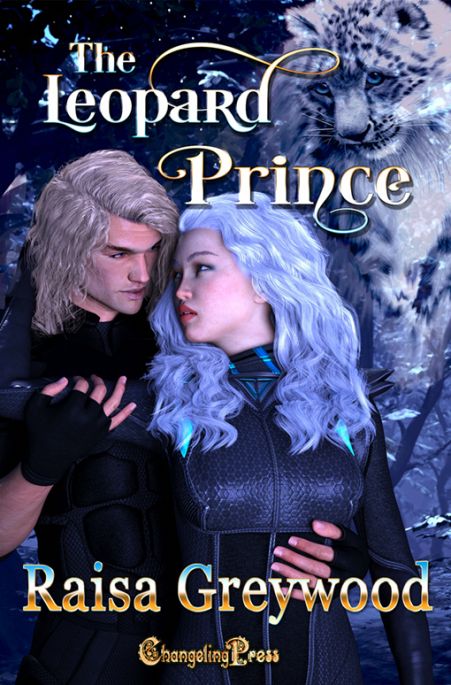 My brother is dead, executed at the hand of my beautiful and fierce snow leopard mate, Chen Daiyu. But Norkad was a pawn in a bigger game, and chose death over helping me protect my female. I want to resurrect him just to kill him all over again.

The bond between me and my elegant, deadly mate grows stronger every minute, until we know each other better than we know ourselves. She is perfection, body and spirit, and in her feral desires that heat the blood in my veins.

But there are those who would use my Daiyu for their own purposes. And when they take her from me, nothing will stand in the way of getting her back. For her, I would destroy worlds and dance in the ashes.

My leopard lounged in smug contentment in a corner of our shared mind, purring as she washed her paws.

“Gloating is unattractive,” I told her.

So is pouting. Why are you unhappy, Xīngān?

“I want to be left alone with my mate. There are too many demands on our time. Why can we not have a few days to ourselves?”

She laughed, knowing exactly what I wanted. It included a bed, a locked door, no comms, and definitely no clothes.

Be patient, little cub. You will have your whole lifetime to enjoy Dakar’s company once we finish our duties.

Heat blossomed in my belly as I thought of all the things I wanted to do to my delicious mate. Dakar inhaled sharply and glanced at me as our shuttle approached his ship, leaving the muddy ball of Earth behind us. His eyes darkened and he smirked, revealing the points of his canines. The sweet, musky perfume of his arousal filled my lungs and I hid a smirk. I wasn’t the only one who wanted that locked room.

The docking bay opened, its marker lights drawing a path into the belly of the ship. Akari whimpered behind us. I knew the eagle must be frightened, but I had no way of comforting her until we landed and the doors closed behind us. She was probably like most shifters; terrified and uncomfortable with confinement. The sensation must be worse for large birds.

My mother and sister would be able to help her. She would be more comfortable among female shifters. Jinjing’s calm presence would soothe her as well, but I doubted my sister by mating would leave Huang.

The bay doors closed behind us and the atmosphere equalized with a hiss of pressurized air. Dakar unfastened his harness and opened the shuttle doors. A male I didn’t recognize poked his head inside and grinned at Akari, but she hid her face behind the Dalai Lama.

“Welcome back, Commander. If you’ll step out, we’ll get you unloaded.” He disappeared from the door.

“Go ahead, and take the human with you. I’ll sit with Akari for a moment.”

Dakar blinked at me, giving me a questioning glance. “Are you –”

I glanced back at the young eagle. She was shaking badly and her pale skin darkened with the tracery of feathers. “I’m sure! We’re about to have a lot of trouble in here.”

He looked over my shoulder and frowned. “Miss Takamoto, I’m afraid you can’t shift in the shuttle.”

I growled and pushed him out. My leopard hissed and added a hard swat to his backside as he stumbled from the shuttle. Stubborn males! She chuffed out laughter as he stared at us from the deck. I’d have to apologize later.

“Akari, I’m sorry, but my mate is right. You can’t shift in the shuttle, but I know a place that will be big enough for you if you can hold it for a few more minutes.”

She exhaled, then wiped a hand over her face and stood up. “Yes, revered leopard. I’m ready.”

I took her hand and helped her step down from the shuttle. Males bustled everywhere and the noise of conversation and equipment was loud compared to the silence and peace of my home. I could hear Akari’s harsh breaths over the noise and the stench of her fear filled my nose.

She shifted several times as she tried to control her panic, making the males stop their work and stare. Their attention made her distress worse, and I wished I’d thought to clear the deck before taking her out.

Trying to control my irritation, I pushed my leopard’s strength out to encompass her in a bubble of peace. “Pick one shape, Akari. I don’t care what you do, but choose one and I will help you keep it.”

She whimpered one last time before settling on my arm, her feathers fluffed out to make her appear larger. I wished that I could hood her and tie jesses around her feet as the ancient falconers did. Her talons clenched tightly on my arm. The Ximeran fabric prevented them from digging into my flesh, though I knew she’d leave bruises.

She fought me with every step. Her immature body demanded that she protect herself against perceived threats. Her lack of control was worrisome and I knew we’d have to keep her secluded until she grew comfortable. I hurried through the corridors toward the holo, hoping I could keep her under control until we reached that place of safety.

Exhaustion from nearly twenty-four hours without rest made me irritable and easily angered. As the door shut behind us, I shook her from my arm. With a dismayed screech, she took to the air and perched on a branch above my head. I knew I shouldn’t take my aggravation out on her, but I was simply too tired to coddle her further.

“Someone will bring you food shortly, Akari. It will be a male, and I suggest very strongly that you don’t hurt him. You may hide if you wish.” Remembering the shy boy who served as the cook’s steward, I added, “Quite frankly, he’ll be more comfortable if he doesn’t see you. You will be confined here until you can regain control of your eagle.”

She flared her wings, clicking her beak angrily. I held my gaze on her until she settled, and said, “I’m sorry. I know you have troubles and I will speak with you later. Right now, I’m exhausted. My brother is badly injured, and I’ve insulted my mate. I must see them and rest before I can give you the attention you need.”

Raisa is an up-and-coming author of romance with a dark and naughty twist. Her heroes are sometimes flawed but always the alpha in the room, while her heroines are atypical and can take anything those bossy alphas dish out.

The one thing that Raisa most loves is tipping tropes on their ears and making fun of them. She also adores alliteration.

She’s lived all over the world but currently resides in the Midwestern United States with her husband, two irascible cats, and a big bay rescue horse.