Sometimes temptation is just too great.
I’m going to claim her. Damn the consequences. 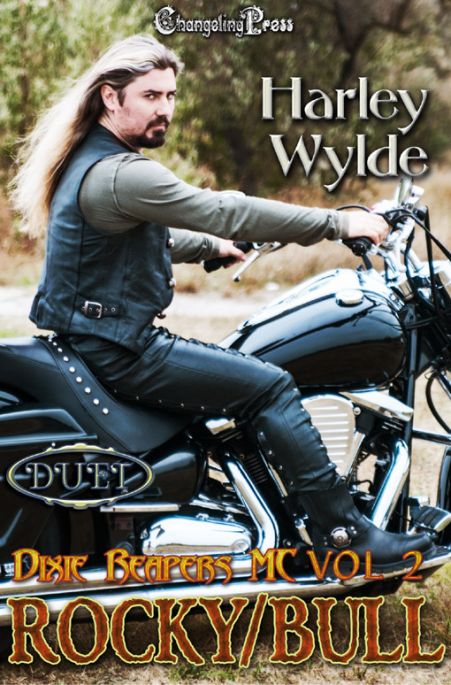 Mara: My stepbrother Sebastian wants what he can’t have — me. When I crashed down a mountain the man who pulled me from the wreckage rescued me in every way that counts. Rocky is the biggest, sexiest badass I’ve ever seen. The stubborn man says I’m too young. I’ll just have to prove him wrong.

Rocky: I never expected that past to show up in the form of a sexy-as-fuck woman — a woman I shouldn’t touch. I’ll do anything it takes to keep her safe, even go home to Alabama. My brothers, the Dixie Reapers, will help protect her. I’m just not sure who’s going to protect her from me, because I’m never going to let her go.

Darian: I can tell he wants me, even though he’s fighting himself. But he doesn’t have to… because I’m his. I’ve held onto my virginity all these years, but I want him more than I ever thought I’d want someone. For once, I’m going to get what I want. And I want Bull.

Bull: There’s more than twenty years between us. I wanted to be a better man, to walk away, but I can’t. She begs me so sweetly, and soon I can’t resist anymore. She’s mine. And any fucker who tries to take her from me is going to die a slow and painful death.

Get the paperback at Amazon!

My hands clenched the wheel tighter as my small car careened around another curve on the icy mountain road. How the weather could be this bad in early fall, I didn’t know. My heart raced in my chest, and my gaze shot to the rearview mirror. Still alone. If they were following me, I didn’t see them. Even Sebastian’s men wouldn’t be dumb enough to drive these roads as fast as I was taking them, would they? They were New Yorkers, though, and would be used to bad driving conditions. I, however, was a California girl and hadn’t had much experience driving on icy and snow-covered roads.

Something darted across the road, and I reflexively hit the brakes. My car fishtailed, then started to slide. A scream tore from my throat as the small compact crashed through the railing and down the side of the mountain. The crunch of metal made my heart beat faster, and I wondered if I was about to die. Glass exploded into the car as it bounced against the mountainside. My head slammed into the steering wheel more than once, and black dots swam across my vision.

The car landed upside down at the bottom of the craggy cliff. My harsh breathing filled the air as I tried to focus. I was dazed and hung limply from the seat belt, my hands brushing the roof of the car. Blood trickled into my hair and more ran down my arm. I groaned, feeling battered and bruised, but thankful to be alive. I didn’t know how long I hung there… minutes… hours… but the crunch of snow alerted me to another presence. I hoped like hell it wasn’t Sebastian or his men. I’d rather die than see them.

A gruff voice cursed, one I didn’t recognize.

“Hello?” I called out, my voice weaker than usual. “Help. Please, help me.”

For a moment, I wondered if I should have kept quiet. Just because I didn’t recognize the man outside my car, didn’t mean he wouldn’t hurt me. I didn’t know everyone in Sebastian’s employ, and there were monsters out in the world other than the man who wanted to claim me. As if I’d ever let him touch me!

Denim-clad legs came into view with massive feet encased in brown boots. The man dropped to one knee, his gloved hand braced in the snow as he peered into what was left of my car. Blue eyes met mine, and my breath stilled. Fine lines fanned from the corners, and his nose looked like it had been broken at some point. But that was all I could see of the man. His face was covered in a beard, and the parts of his hair not covered by a hat spilled around his face, looking as if it hadn’t seen a brush today.

Something about that voice, dark and commanding, sent a chill down my spine. Not in a bad way, though. Something about that voice made me want to obey. The man rose to his feet, and his hands closed around the door of my car, or what was left of it. The metal groaned as he ripped the door off and flung it away. My mouth dropped at the brute strength on display. How strong exactly did you have to be to rip off a car door? I’d never seen anything like it.

His hands, now bare, reached for me. The seat belt wouldn’t release, and he reached into his pocket, withdrawing a knife. He easily sliced through the belt. I fell to the top of the car, and hands far gentler than I’d have expected, pulled me from the wreckage. As the man stood, lifting me as if I were no more than a child, I realized that the hunk of man who had helped me was way taller than my first impression. And much, much broader.

He grunted and eased me down. I wobbled a moment, my hand braced on his wide chest. When I got my footing, he released me long enough to pull my bag from the front seat. It didn’t have much in it, but wherever I was going, I would need the things inside. The man slung the bag over his shoulder before lifting me once more, then we were off, striding through the knee-deep snow. Or rather, he was walking through knee-deep snow.

His gaze flicked down to mine. “Rocky.”

I waited, but no last name was forthcoming, and I wasn’t going to press him for it. He didn’t have to pull me from that car. He could have left me for the wildlife to find, or to freeze to death and not be found until spring when everything thawed out.

Snow began to fall in thick gusts, and soon I couldn’t see in front of my face. The man holding me trudged forward, through the ever-thickening snow, not stopping, not even slowing down. I didn’t know how long we walked, but soon I saw a structure come into view. No. A cabin. There was a wide porch across the front and a large stack of wood near the door. Another pile of wood peeked around the corner of the house with a tarp over the top.

Rocky clomped up the steps and pushed open the front door. The crackle of a fire welcomed us, and I moaned as the warmth from inside the house licked at my skin. I was frozen everywhere. He eased me down onto the bearskin rug in front of the fireplace and pulled a blanket from the couch, wrapping it around my shoulders.

My teeth chattered with such force I thought they might break, and I trembled from head to toe. I watched the mesmerizing flames as Rocky stepped away. I heard him trudging upstairs, only to return a few minutes later with two thick pairs of wool socks, some sweatpants, and a flannel shirt clutched in his massive hands. He crouched in front of me and slowly removed my shoes and socks.

I let out a squeak when he reached for the top of my jeggings and began sliding them down my legs. Too stunned to do much but stare, I didn’t protest as he pulled the blanket from my shoulders and removed my coat and sweater. Even though his gaze didn’t stray anywhere for too long, I felt exposed. No one had ever seen me in my underwear before, and I knew I should say something. Then again, he probably didn’t like women with as much meat on their bones as I had. My thighs were thick and jiggled when I walked, my ass should probably have been assigned its own zip code. And while my breasts were large and sometimes drew male attention, they weren’t big enough to make my rounded stomach look any smaller.

His gaze roamed my body before he rose to his feet and disappeared again, leaving me mostly naked in front of the fire. When he returned, there was a wet rag clutched in one hand and a tube of ointment in the other. Rocky crouched in front of me again, gently wiping the blood from my body. I winced as he applied the ointment to my cuts. There was one on my forehead and another near my collarbone, and my arm was dotted with smaller cuts from the broken glass. He sat back on his heels and studied me again, his gaze caressing every inch of my body. Did he like what he saw?

Check out more books by Harley