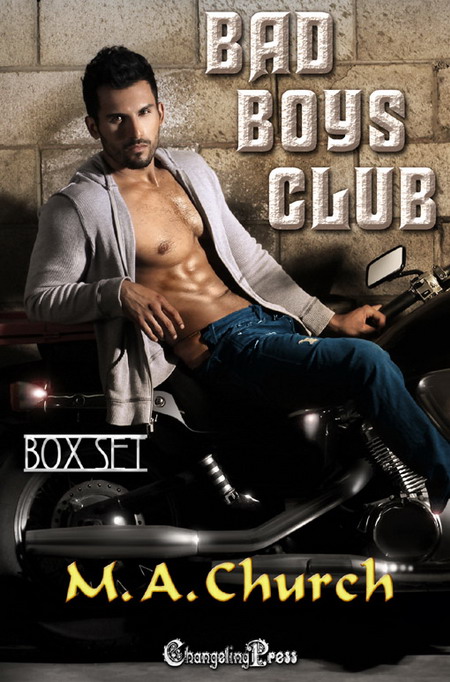 Not all romances are sweet and fluffy.

Pounding music and writhing bodies fill the dance floor at Night Moves. A small, very elite group of friends called The Bad Boys Club use the place as their personal hunting grounds. Spoilt, powerful, and totally amoral, they use men without thought for the consequences of their actions. But each of these predators harbors a secret desire, a passion, that drives him.

And it hasn’t gone unnoticed.

Three dangerous paranormals on the prowl for a mate stalk the humans. Dark and deadly desires are their calling cards. A demon prince, an ancient vampire, and one of the deadliest werewolves to exist have their sights on The Bad Boys Club and their sensual secrets. Love comes in all forms, even for unscrupulous humans and lethal paranormals.

Publisher’s Note: Bad Boy’s Club contains the previously published novellas Lust and Ice, Into the Darkness, and Haunting the Night.

Kain, AKA Ice, moved through the Friday night crowd on the dance floor of Night Moves, a trendy upscale bar. For VIPs, the club had a decadent, kinky side. The second level was members only and membership was awarded on the basis of money, power, and prestige. The second level was where other jaded predators like Kain roamed.

The bottom level — the dance floor — was where the fresh meat was kept. After all, every predator needed prey.

Kain avoided the teasing hands that reached for him. No one caught his eye, but the night was young. He nodded to the bouncer guarding the secured entrance to the second level. Of course he wasn’t stopped. He was well known at the club.

Across the way he saw his childhood friends sitting at their usual table and made his way to them. Throwing his leather jacket on the back of his chair, he picked up the drink they had waiting for him. “Sorry I’m late. The old man was on my ass again.”

“What about this time?” Jordan asked.

“Some kid yelling I hit his car on the way home a couple of nights ago. He threatened to call the cops — claimed I left the scene of the accident.” Kain shrugged as his eyes scanned the dance floor. “More like a mercy killing. My damn watch costs more than that heap he was driving, but he carried on like a bitch in heat over it. The old man calmed him down, as always.”

“Meaning your dad had his lawyer pay him off.” Allen rolled his eyes. “What’s someone like that doing over here in our part of town?”

“What else,” Hugh said. “Looking for a way to make easy money. Those kinds of people shouldn’t be allowed over here.”

“I never said it happened on our turf. I was slumming.” Kain turned back to the group with a cold, emotionless grin. Actually, he’d been mindlessly screwing some nameless guy in the hopes of losing himself, if only for a little while. “If you know what I mean.”

“Well, you know what they say. If you lie down with dogs…” Hugh shrugged. “On another note, boys, you owe me five thousand apiece. That sweet little thing, Chris? Yeah, I popped his cherry last night. Told you I would. Only took me two weeks, too, to convince him that we were meant to be.”

“You have the devil’s own luck,” Jordan groaned.

“Actually, that’s Kain. I’m still behind him by two virgins.”

“How do you find these guys?” Allen complained. “I’ve only managed to find two!”

“Oh shut up. You’re one ahead of me.” Jordan rolled his eyes.

“Back on subject, fellows. Did I mention how sweetly he cried?” Hugh smirked. “And get this… he’s thinks I’m going to keep calling him now, be his boyfriend. Seems like he was waiting for that special someone, the love of his life.”

“Yeah, right. What a loser.” Allen sneered. “How often did you have to tell him you loved him?”

“Too many times.” Hugh’s disgust was clear as he raised his glass and winked. “Like I’d be caught dead outside of a bedroom with someone like that.”

“Goes without saying.” Kain sprawled in his chair. “So, how’s it looking down there? Fill me in.”

“Jordan and I have a bet going about who’s going to do that redhead on the dance floor first,” Allen said. “He’s the one with the green shirt, there in the middle.”

“Why not do him together?” Hugh asked.

“We plan to.” Allen winked. “I said I’d do him first. We’ll tag team him later. Been awhile since Jordan and I got to do a double penetration.”

Kain’s hearty laugh boomed out, drawing attention from those around them. “I almost feel sorry for the guy.” Kain glanced around the group; several pairs of disbelieving eyes stared back at him. “Okay, no I don’t.”

“Hell wouldn’t have me.”

“Oh yeah, it would. Personally, I think we’d end up ruling hell.” Allen smirked at Kain.

“Ah, someone has that position, remember?” Jordan shrugged.

“We could be kings, or lords.”

“There’s supposed to be seven princes of hell. One for each deadly sin.” Hugh rolled his eyes as his friends stared at him. “What?”

M.A. Church lives in the southern United States and spent many years in the elementary education sector. She is married to her high school sweetheart and they have two children. Her hobbies are gardening, walking, attending flea markets, watching professional football, racing, and spending time with her family on the lake.

But her most beloved hobby is reading. From an early age, she can remember hunting for books at the library. Later nonhuman and science fiction genres captured her attention and drew her into the worlds the authors had created. But always at the back of her mind was the thought that one day, when the kids were older and she had more time, she would write a book.