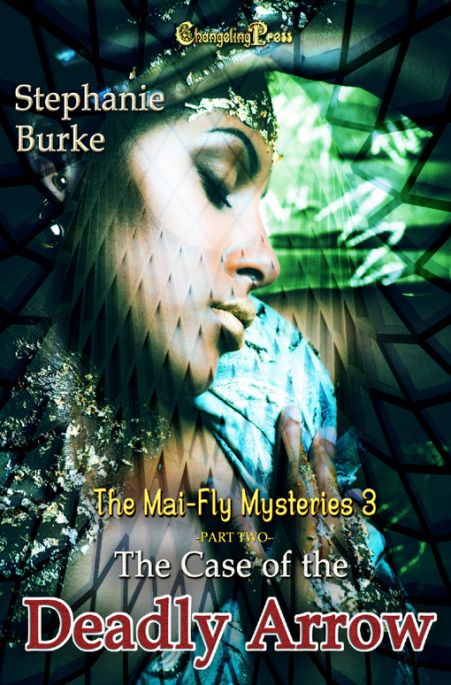 Mai becomes trapped in a deadly game with an assassin as she tries to get rid of the riots on her doorstep and understand the beast within her, with the intimate help of a Dryad named Ptris. Can she maintain her relationship with her Gremlin Ry-Ry and uncover the mysteries of the deadly arrows before one of them hits their target?

“So… I take that to mean that someone is trying to kill me… outside of being mad about the riots.” They had untangled themselves from the massive people pile on the floor and Mai was now staring at the flaming arrow in her television set.

“Well, I never liked to watch much TV anyway,” she muttered, grateful that the sparking and hissing had stopped. “Ry will be devastated. What’s he going to watch soccer on now?”

In truth, Mai was shaken. A lot of really bad things had just happened to her in a really short amount of time. She was standing there calmly taking about current events in her life when in actuality, she wanted to hide someplace, preferably with a bottle of rum and a dangerous but sweet, hard-to-kill Gremlin. So… seeing that none of these things were possible right now, Mai was stuck trying to hold it together with two detectives, a Dryad, and an Asshole staring at her like she was going crazy.

“It’s football,” Ptris finally spoke as he moved beside her and placed one heavy hand on her shoulder. “Americans don’t have to take everything they see and rebrand it. It’s football because you pass the ball around with your feet.”

Maria was snapping photos and The Asshole was sitting in a chair, looking like she really would rather be someplace else.

“Football is a man’s sport,” Evan countered, moving to Mai’s other side, his calmness seeming to Mai to be a bit unnatural. “Full-out gladiator blood sport that is dangerous, exciting, and fun.”

“That would be rugby,” Ptris corrected, “If you are claiming human sports. No pads, blood and grit, a man’s game to be sure.”

“Human games?” Mai asked, having a feeling she was going to regret that question, but anything was better than staring at the fucking flaming arrow stuck in her TV. She pulled her attention away from near sudden death and turned it on her Dryad. He was talking about sports right now… If this was a ploy to stop her from thinking about her burning, painful near-death, it was working. Oddly enough, she had to know more.

“We had a game played in the Unseelie Courts, Blashavah.”

“It is a time-honored game of endurance and perseverance. The players, seven on each team and five teams in total, strip down to their skin. They pummel each other with blunted pikes to be the first to capture a Shavah, a venomous rabid female miniature dragonling that is bespelled not to fly higher than ten feet. But as it is a land dragonling, its preferred method of escape is to burrow into any hole it finds, including holes in live bodies. The first team to capture the creature with the most mobile players at the end wins.”

“You are making that up,” Mai finally accused, narrowing her eyes at the Dryad. “No way…”

“It is a violent and very exciting game,” Ptris defended.

“That sounds interesting,” Evan finally spoke, his eyes lit with the fire of a new blood sport. “How often do they play?”

“Usually during festivals, feasts, fetes, and before important political discussions with other courts in the realms. It is a celebration of life and a show of strength to those leaders watching.”

“A glimpse of an army and a taste of what they are capable of before you decide to go to battle.” Evan pursed his lips while nodding his head. “Slick. I bet that prevented a whole lot of wars.”

“Or at least made those hungry for the taste of blood and steel to reevaluate their decisions and act wisely and accordingly.”

“And they are completely naked?” Mai wrinkled her nose. “Everything just… hanging out? No protection at all?”

“It keeps the players attentive and cooperative. They must watch each other’s flanks as well as fight for the goal.”

“Cooperation and comparative skills building, Mai. We should adopt something similar before every meeting with other competitive countries. Give them something to think about instead of sending young people off to war while they sit in air conditioned offices calling the shots.”

“But… naked?” Mai could not get that picture out of her head. There were too many dangly parts on men and women to be running around on a field, dodging spears and trying to capture a slurping, poisonous lizard that could fly and liked to hide in holes. She looked down at her boobs and shook her head. No fucking way. The pain alone would bring her to her knees.

“Well, they are allowed gloves.”

“Gloves?” Mai asked, dividing her attention and her incredulous looks between Evan and Ptris.

“You don’t want to lose a finger. If the Shavah bites parts off, it is very hard to reattach them. The best swordsmen maintain all of their fingers. Fae-made digits are fine replacements, but tend to not function as smoothly the digits you are born with.”

“Just the fingers?” Mai had to ask. She had to go there. But there were a lot of dangly parts on a body. “What if something else gets bitten off?”

“Replacements can be made,” Ptris assured her. “It is a mark of honor and courage to have a penis removed in combat. The golden ones they replace them with are said to be better than what the God and Goddess intended and fertility is not affected.”

“I bet John Bobbitt wishes he’d had that option.” Evan chuckled and Mai rolled her eyes. Men. It was a universal thing that their most precious body part was improved upon and they were given honors for being stupid enough to have it bitten off in the first place.

“They replace breasts as well,” Ptris pointed out, and everyone stared at him in silent shock. “Fae warriors are also female, and every other gender besides.”

“Your women fight in active combat and in blood sport games?” Evan looked like he was in awe. Maria, who had finally stopped taking photos and phone calls, looked interested.

“A strong sword at your back holds no gender. That is one thing that always annoyed me about humanity. You leave half of your warriors at home, some even unable to defend themselves, while you go off to war. Your women are just as capable of wholesale slaughter as your men, and in fact, some are more dangerous than your decorated soldiers. And you kill with projectile weapons. Most of your soldiers never see hand-to-hand combat at all. I knew of several human females who could defeat your male fighters without undue stress or increased breathing rates.”

“One for femininity!” Maria gave a little cheer. The Asshole looked a bit more uncomfortable, sulking in a chair and wearing the remains of her hot chocolate.

“We honor our warriors of all genders and species.” Ptris was on a roll. “Which is why I don’t understand humanity’s problem with race. The weather conditions in the place of your ancestors’ origins has no bearing on your ability to function and add to your society as a whole. The way your ancestors’ skin adapted for survival in harsh climes does not affect brain function, ability, heart, strength, nerves, cunning… It is a waste of intelligent brains and capable minds to kill over such a trivial thing. Humans confuse me.”

“They confuse me too,” Mai agreed. “I never understood that.”

“You are Fae,” Ptris summed it up nicely.

More from Stephanie at Changeling Press …

A grumpy troll and a cheerful pixie prove St. Patrick’s Day
is the best day to fall in love. 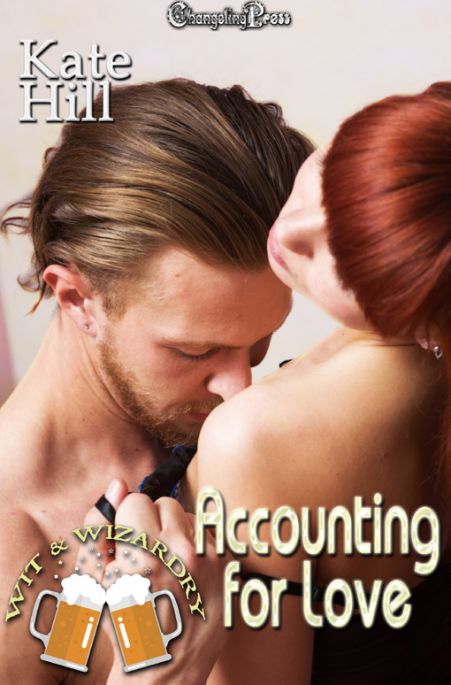 Lucas has just returned from a most unsatisfying vacation to find his department at the Wit and Wizardry Brewery in a shambles. Of troll ancestry, Lucas is a man of appalling disposition and astounding accounting skills. Determined to set everything in order as soon as possible, he refuses to leave the office at closing time, even thought it means missing out on St. Patrick’s Day celebrations.

Lucas finds he’s not the only one working late. Cait, the newly hired head of marketing for the brewery, is there as well. Her overly-cheerful manner drives Lucas crazy. The last thing he needs is an optimistic, chatty, adorable pixie distracting him at work, but she can’t seem to understand that he wants to be left alone.

What neither realize is that earlier that evening, Lucas had washed down his dinner with a magical beer that will guide him toward his true love. The abominable accountant and the merry marketing manager are about to prove that opposites do attract and St. Patrick’s Day really is the best day to fall in love.

“I hadn’t noticed. Believe me, Lucas, the only reason you’re working here is because you’re great at your job and because you don’t have to work directly with paying customers.”

“One thing I’ve always liked about you, Dillon. You’re honest.”

Dillon grinned and shook his head. “The second thing I wanted to say is you don’t have to stay late tonight. You have plenty of time to set things in order during working hours. What’s the point of taking a vacation if you’re stressed again by the end of your first day back? It’s St. Patrick’s Day. After work, my brothers and I are going to the pub to hang out with friends. Why don’t you come along?”

“Your brothers hate me and so do your friends.”

“You’ll be doing me a favor if you come. Truth be told, I don’t feel like celebrating anything so soon after…”

Dillon paused and Lucas shook his head. Dillon’s girlfriend had left him recently and despite his grinning exterior, he still hadn’t gotten over it.

“You need to put that woman out of your mind entirely,” Lucas said. “Tell you what, instead of going to the pub, maybe you should work late, too. I find that if I immerse myself in –“

“Forget it. I’ve worked enough late nights and early mornings. I need to relax. If you change your mind about joining us –“

“No thank you, Dillon. I’m not leaving this office until it’s back in order. Pixie slurs aside, I ask again, who looked after this department and left such a mess?”

“That would be me. Your employer.” Dillon grinned and winked before he turned and left Lucas muttering over his paperwork.