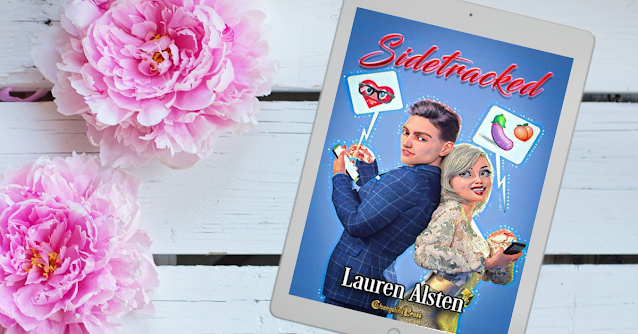 Librarian Allison Callahan, aka “Encyclopedia Allie,” has always loved her steadfast and dependable best friend, Dane. She’s just never admitted it to anyone, including herself. But Dane keeps trying to kiss her, and it’s changing their relationship status from friend-zone to danger-zone. Sure, Allie wants more, but what if Dane finds out she likes her hanky panky with a side of spanky?

He’ll freak, that’s what. So she rebuffs his advances, tries to shake things up… and unbeknownst to him, discovers one of his best-kept secrets.

Meanwhile, Dane is so frustrated he fantasizes about taking Allie over his lap. A good spanking would serve her right for refusing to acknowledge what they both already know: they’re perfect for each other. But he’s so busy trying to make partner at his law firm, he doesn’t notice something’s a bit off about his bestie.

Between the shock of the secret she never knew and her lukewarm launching of the library’s virtual book club, Allie’s ready to let loose. At her and Dane’s high school reunion, it’s clear they’re ready to take the next step, but after a red-hot night of lust and love, will the next morning’s Walk of Shame ruin everything?

Back when I was a kid, the library held a solemn mystique, a haven away from the mayhem of everyday life, the shrillness of school and a noisy neighborhood. The zigzaggy avocado-green carpet would always make me dizzy on the way to the card catalog, but I loved all the neat, half-handwritten, half-typed index cards. These days, no cards remain, except for a few relics memorialized in framed prints on the walls in stacks. The old pine cabinets have been retrofitted into mock-vintage PC terminals, where you can still search non-fiction’s trusty Dewey decimal system. Fiction titles are arranged much like a bookstore, and while the comfy green reader chairs now sit ten feet apart per regulations, the kids still move them. It’s no use scolding; nobody listens.

Following two rounds of quarantine, everyone is all too happy to get out and mingle, only now they mingle louder to compensate for their masks. Enforcing the face covering rule is hard enough, but keeping the noise level to a dull roar is an exercise in futility. I head back to my desk, irritated and defeated, recalling simpler times, when this institution was used for research instead of a social hangout.

Yes, I, Allison Callahan, the normally quiet, studious, and ultra-organized librarian… am cranky.

I secretly lust after all the Filthies’ ass-slapping alphas. And… my real-life alpha best friend, Dane. He’s the man I’ve known for twenty years, the same man who, ever since he was involved in a minor accident a few months ago, has tried to kiss me every chance he gets. I don’t let him. It’s not because I don’t want to, or even because I don’t want to jeopardize our friendship (which I don’t), but because I’m…

… the biggest chickenshit on the planet. My Mom and my sister Tara would scold me for swearing, but really, chickenpoop just doesn’t have the same ring to it.

Now, between being unable to read and frustrated at having to learn video conferencing technology, my workday seems like it’s lasted forever. Dane texts the minute my shift ends, promising me dinner and a movie if I help him pack for his upcoming move. I drive over, kicking my pinchy shoes off as soon as I enter his bedroom. If he’s surprised, he hides it well. I hardly ever cross the threshold from the enormous living room into his private suite. He turns his imposing six-foot-two self toward me and smiles a little too big.

“Hey there, AllieKat. Take a seat. Just a few more boxes, and then we can watch Girl on the Train, okay? Pepperoni pizza is on the way, I got you a huge bag of kettlecorn, and there’s pumpkin pie for dessert.”

“What girl on which train? And triple yes on the ‘za, corn and pie.”

He opens his mouth to explain his movie choice, but I just laugh and flop backwards on the bed. It’s convenient when your bestie understands your serious sweet tooth. His bedroom isn’t so risky tonight since my sister and his brother are home. Tara and Jared have been playing house for over a month, trying to integrate her two cats and their new puppy, Bentley, who’s a holy terror. Bentley finally learned not to mess with the felines, but now he’s taken to stealing things and leading everyone on a mad chase around the house. Within five minutes of my arrival, he’s already stolen a potholder, the roll of packing tape, and a pair of Tara’s leather boots.

My usual propriety takes a backseat as I recline on Dane’s bed, his cool comforter sliding beneath my hands. I stare up at the ceiling, cross my bird-like legs and ponder how to mention the reunion without ticking him off. He already knows something’s up, though. Usually, I say no to Dane during the week; we’re both too busy. But he needs help packing, and I need to convince him our ten-year hybrid-virtual reunion this Saturday will be fun. After a year and a half of social miss-tancing and another four-month delay because two other venues cancelled, I need to hang out with old friends, in person. Safely, just not alone.

I’m still wary of running into Thomas Hyde. He was a no-show at our five-year and hasn’t RSVPed to this one yet. Thomas was our movie-star quarterback, the only boy who asked me to my senior prom. When he picked me up for the dance, he told me I was beautiful. Later, swaying to an angsty ballad, he whispered, “No man is ever going to want to date you, Allie Callie,” right before he abandoned me on the dance floor.

Was he a jerk? Absolutely. But his words wormed their way into my psyche: a man can tell you that you’re beautiful in one breath and dump you the next. Since then, I’ve had scant few dating offers (four, if I count one disastrous blind date) and even fewer boyfriends (two who couldn’t deal with my having a boy BFF).

My track record with men in general is sketchy, and with Dane specifically, it’s abysmal. One visit to his frat house at Harvard proved we weren’t meant to be. My teenage crush on Criss Angel came in handy, because nobody suspected I faked throwing back four shots. Only the fifth one was real, and I gagged. Malört is evil. I started acting tipsy, figuring it was now or never. I sat next to Dane, tried to French kiss him, and when that didn’t work, went for broke, pitching face-first into his crotch. Told him I wanted to lick his Danesicle. Disgusted, he picked me up and put me to bed — alone. I left him a note in the wee hours (claiming Malört Memory of the prior night’s events) and slunk back home to die a private death of mortification.

I used to think I was a prude, but after that, I knew Dane is the most sexually conservative person I’ve ever met. Even the word sex makes him cough and sputter. Tara’s extremely open, I’m more the “keep it under wraps,” type, and Dane — well, even his current bedroom furniture is prudish and perfunctory. Square, plain. Mission-style. As in “missionary.”

For now, I drag my mind out of the gutter and prop myself up with a pillow. Watching him sort and pack soothes me, his biceps flexing under the weight of heavy law books he’s dumping into random boxes. The sight of his corded forearms, the biceps hiding inside his tight Henley, the curve of his muscular thighs filling out his jeans. All these things turn me on, but tonight my heart races because I really need to sell Dane on the reunion thing. I don’t want to play the loner librarian, especially if Thomas shows. Overthinking is my specialty, so I swallow the lump of reticence to cue up my rehearsed Reunion Ruse. By the looks of it, I’m not the only one about to take a chance.

Dane is going to try to kiss me again. He always angles for a peck, usually on the cheek, and he’s predictable as ever: his face gets this dopey, hopeful expression, followed by the twitch of his left eyelid. It’s kind of cute, considering.

Mr. Twitchy would freak if he knew how sexually conservative I’m not. To him, I’m still Encyclopedia Allie, strait-laced, straight-A and headed straight for 2.25 kids in a white picket fence suburbia. Dane would never look at me the same again knowing I have less-than-vanilla preferences, and while I don’t think spanking is that strange, he would. People who color outside the lines, like my sister, make him uncomfortable. If he knew my preferences, he’d run. And if he did? I’d die.

So Dane trying to kiss me? Not going to happen. I love him too much as a friend. To him, I’m a nice, vanilla girl, and I want to stay that way, even if it means one day seeing him with someone else.

I still fantasize about him taking me over his lap and whipping my ass to a cherry red, though. I just keep that freaky little fantasy to myself.

When she’s not obsessing over her latest characters and dreaming up meet-cutes for future books, Lauren Alsten loves photographing wildlife while hiking under a warm sun and bright blue skies. Her writing journey began with A-list movie star fan fiction, but these days she prefers penning humorous tales of emotional upheaval served with a side of snark. She currently lives with two ungrateful cats who never lift a paw to help around the house.
Find Laura Online: Website | Facebook | Instagram | Twitter