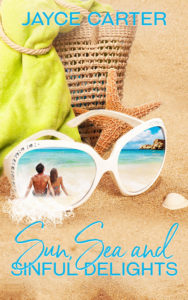 Her three sexy houseguests are forbidden fruit, and she really wants a taste…

Jennifer has spent her life trying to be who her rich and proper family wants her to be and never quite living up to it. All that has given her is a failed marriage, a lot of insecurities and a business selling sex toys in secret. When she rents out the rooms of her beach house to three handsome men, however, she wonders if they might just put her toys to shame.

Lucas, Shane and Brandon go on vacation to get over the woman who broke their hearts. They’re tired of being treated as a dirty little secret by girlfriends who enjoy their attention in private but refuse to accept them in public. When they meet the sweet woman who owns the house they’re staying at, though, they realize it might be worth it to take that risk just one more time.

Even as Jennifer starts to fall for the men, she can’t escape the reality that her family will never approve of the odd relationship. In the end, she will have to decide what she really wants—the approval of her family, or a life with three men who make her truly happy…

Reader advisory: This book contains a brief scene involving sexual and physical assault. There is also menion of an emotionally abusive family.

Jennifer had thought that plenty of times when a client asked her to make something well outside her personal comfort zone, but the payment had always been more than worth it.

Still, when the toy dwarfed the soda can it sat next to, she winced.

No one needs that much.

If any man came at her with that, she’d run in the opposite direction. There really could be too much of a good thing.

She snapped a picture, then finished packing everything into the box. A quick tape job before she affixed the label, and she was done.

Despite their odd proportions, she did love taking special requests. There was something fun and creative about working on a product for a specific client, a challenge that her mass-produced items lacked.

And, yes, so maybe making sex toys wasn’t the creativity most people would picture when they thought about artists, but what did that matter?

She’d found a niche that paid well, that she enjoyed and that she’d found success in.

Not that anyone knows…

She thought about her mother, about the absolute horror that would show on her face if she ever discovered Jennifer’s real job.

Nope. Let her think I just rent out the rooms of my house.

Whatever it took to keep her family off her back was fine by her. Managing them was a full-time job on its own.

Jennifer’s ringtone had her leaving her newly sealed package on the living room table and rushing to answer her phone.

“I think we should try online dating,” Mandy said, mid-conversation as she always was, as if Jennifer hadn’t really needed to answer for the talk to go exactly the same way.

“How about sex? Forever love? Sex? A partner? Did I mention sex?”

Jennifer leaned her hip against the stool at the counter. Love wasn’t something she really believed in anymore, and sex?

That was nothing the thing she’d just packed up couldn’t handle just fine.

Well, maybe not that box.

“Internet dating is for people who want to have a higher-than-average chance of being murdered,” Jennifer pointed out.

“It’s for people who don’t go out enough to meet anyone the old-fashioned way. I’ve tried to get you to go to bars, to go anywhere, and you refuse. At this point you’ve got two options—online or bar hopping with me.”

The thought of bar hopping with Mandy made Jennifer instantly feel older than her twenty-eight years. While her friend might be a bundle of uncontainable energy, Jennifer wasn’t.

“I don’t think it’s a good idea,” Jennifer said, ready to go into her hand-holding, sweet rejection that wouldn’t hurt Mandy’s feelings too much. Despite them being good friends, Mandy required a lot of work.

A ringing doorbell felt like a rescue, especially since it was loud enough that Mandy had to have heard. “Oh, I’m sorry, I’ve got to go.”

“You rang that yourself, didn’t you?”

Jennifer laughed, almost wishing she’d thought of that. “No, I didn’t. My renters are here.”

“Oh, right. You’re at full capacity for this week, aren’t you?”

“Yep. All three rooms booked together.” Jennifer had scanned the information first, as she always did. The three men were veterinarians and had the same hospital listed for employment. She liked hosting groups, because they tended to need her to entertain them less than singles.

“Well, if they’re hot, bring them to my place on Saturday night. I’m having a party.”

Jennifer groaned at the idea, having already decided that there was no way she’d be inviting them. Still, it was easier to smudge the truth. “Sure, if I think it’ll be their sort of thing. Got to go.”

They hung up, with Jennifer putting her phone back on the charger. She rushed to the front door, reaching it just after the doorbell rang a second time.

She expected to find three older men, the sort who wanted to get away for a few days. She’d hosted all sorts of people at her beach house, and much to Mandy’s lament, it was never young, hot guys.

On her porch stood three men who could have walked right out of any LA casting call.

Talk about tall, dark and handsome…

Jennifer stared so long that it took the one in front clearing his throat to bring her brain back online.

She smiled, trying to play it off as if it hadn’t just happened. “Sorry. Lucas, Brandon and Shane, right?”

The man in front nodded, though a soft chuckle said he’d caught her slip-up. “Yeah. I’m Lucas, in the jeans is Brandon and in the shorts is Shane.” He gestured behind him, letting Jennifer connect faces to the names she already knew.

Lucas had dark skin and even darker eyes. Stubble over his jaw had started to gray, but somehow it only made him more attractive. He wore a pair of slacks and a tucked-in white polo shirt. His hair was trimmed short and neat, and his smile could melt an iceberg.

Brandon wore faded blue jeans and a T-shirt, his dark hair short and simple, as if he hated going to the barber so always picked the easiest option. He had brown eyes too, but while Lucas’ were oak, Brandon’s were honey.

Lastly, Shane had pale skin and reminded her of a college kid. He had his hair shaved at the sides and messy on top, and the bluest eyes that held an unusual humor to them. He reminded her of Mandy a bit, with that same frantic energy inside him.

Lucas cleared his throat again, and she didn’t bother to hide her mortification. Jennifer had rented out rooms in her house for the past six years—why was she acting as if these were the first good-looking men she’d ever seen?

Probably because they’re the first you’ve been this close to in a long time.

She could almost hear Mandy piping in, telling her to pick one and make a claim.

“Come on in,” she said, trying for casual and to pretend that she hadn’t been staring at them. “You’re veterinarians, right?”

Work was always a safe conversation.

Lucas caried in his bag, the others behind him. “Yeah. We run an animal hospital. Brandon handles livestock and large animals, Shane does most of the day-to-day visits and treatments and I’m the surgeon.”

Well, that explained a bit of Lucas’ I’ve got things under control attitude. While any sort of medicine took confidence, actually cutting into any living being to fix them required a calmness and steadiness that Jennifer sure didn’t have.

When they followed her into her living room, she realized that her house—which she had always thought of as rather large—was not nearly big enough for men of their size.

She led them into the kitchen, showed them where the coffee maker and fridge were, and explained the things she kept on hand. She went over the remotes to the television in the living room, showed them how to get the finicky latch on the back slider open, and the places to sit out back, overlooking the ocean. That was the big draw of renting a beach house.

It was why she could never imagine living anywhere else, either. There was something almost spiritual about waking up to the salt in the air and falling asleep to the gentle rhythm of the waves.

They said little as they went through her routine, taking in the details, not balking at any of her odd rules.

She’d found people often complained about them, thinking they were staying at some five-star resort and forgetting that when they booked a private home, they had to expect some idiosyncrasies.

Finally, they reached the middle floor, where the three main bedrooms sat. A single bathroom was shared between them, but since she didn’t use it, it would be somewhat private for them.

“You can decide who takes what,” she explained. “They’re mostly identical. The builder put all the rooms on the side facing the beach, so they all share a balcony that has stairs down to the beach, and they all have the same view. There’s a shower out back, too, to rinse off the sand. It isn’t fun to track that in.”

Lucas smiled, seeming the quickest to speak. Or maybe he just knew how stunning his smile was, so the group had designated him leader. “Thank you, Jennifer. It looks perfect.”

She tried to tuck her hands into her pockets until she recalled she’d worn leggings, which some idiot had decided didn’t get pockets. “I can make a run to the store tomorrow, and I usually try to pick up a few things for whoever is here. There’s a list on the fridge, so just jot down anything you’d like. I make dinner a lot of nights, and I always make too much, so if you ever feel like staying in, you’re welcome.”

Lucas nodded. “I think tonight we’re going to go out, try something new. Any suggestions?”

“Well, what are you looking for? Quick and local, fancy?”

“Local is more our style.”

Jennifer listed off a few places, all small ones that might not make the list for fanciest but had the best food.

The men thanked her before picking their rooms and leaving her to stare at the end of the hallway.

Mandy’s words ran in her head, and the temptation to give in was so strong, she took a step backward.

Nope. Sleeping with men who were only in town for a week was a very stupid idea, and the fact that she’d even considered it meant Mandy was right. Jennifer had gone far too long without a man.

So instead, she gave in and messaged Mandy.

Okay, set up the date. 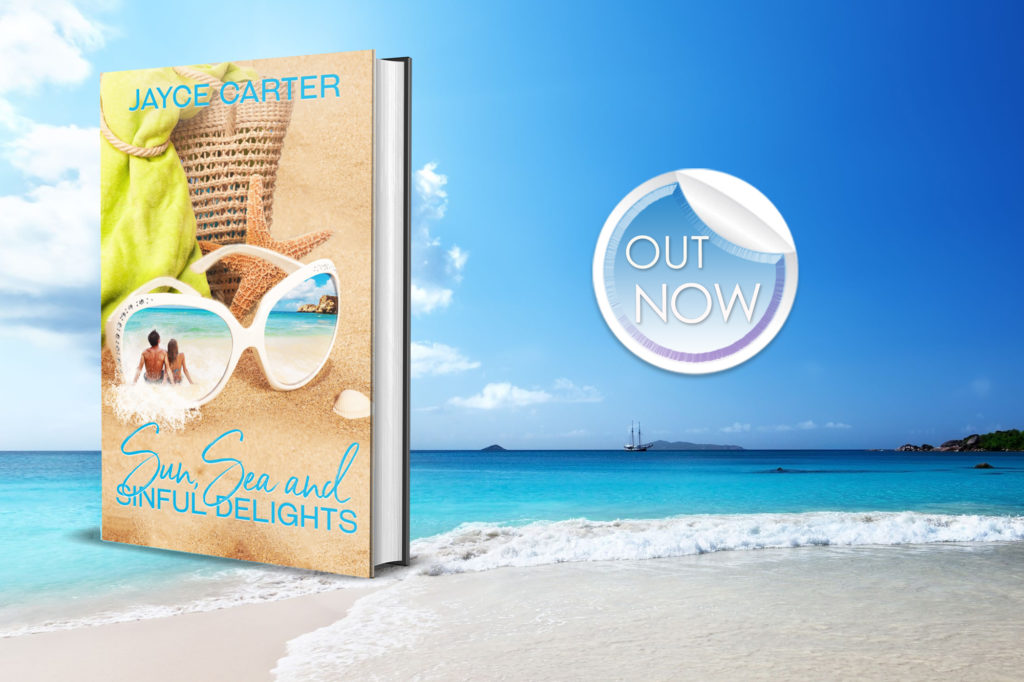 Jayce Carter lives in Southern California with her husband and two spawns. She originally wanted to take over the world but realized that would require wearing pants. This led her to choosing writing, a completely pants-free occupation. She has a fear of heights yet rock climbs for fun and enjoys making up excuses for not going out and socializing. You can learn more about her at her website.

Enter to win a fabulous gift package and get a FREE Jayce Carter romance book!

JAYCE CARTER IS GIVING AWAY THIS FABULOUS PRIZE TO ONE LUCKY WINNER. ENTER HERE FOR YOUR CHANCE TO WIN A LOVELY GIFT PACKAGE AND GET GET A FREE EBOOK FROM THE AUTHOR! Notice: This competition ends on 20th July 2021 at 5pm GMT. Competition hosted by Totally Entwined Group.