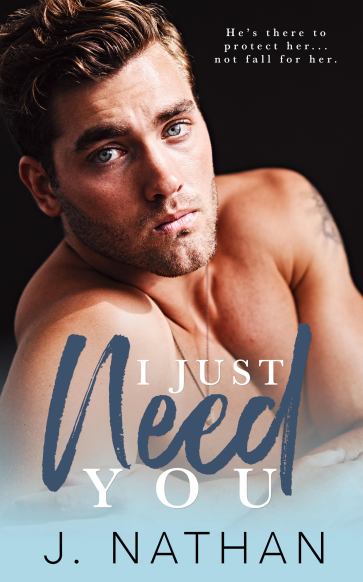 Kresley
Studying abroad was my chance to gain independence away from my privileged life in California. But, when there’s a kidnapping attempt on my life, I’m forced to return home to finish college. I just never expected to get stuck with a pompous, know-it-all bodyguard who watches my every move with nothing but disdain. One whose good looks don’t soften the cold, impenetrable wall he wears like armor.

Tristan
I pride myself on being a professional and taking my job as a bodyguard seriously. But, nothing could prepare me for the high maintenance, rich girl I’m hired to protect. She’s got a smart mouth, is hell bent on pushing my buttons, and doesn’t take the threats against her seriously. And despite the nightmares that plague her dreams, or the fact that I’m the only one who knows about them, I’m not there to befriend her. I’m there to protect her…no matter how much she intrigues me.

Jabs will be exchanged, glares will become the norm, jealousy will rear its ugly head, and sparks…well those damn things will inevitably fly. But will it all come with a dangerous price?

I climbed off my bed and moved to the door, pressing my ear to it to hear who he was talking to.

“A shadow under the door is a dead giveaway that you’re in there,” a deep voice said.

I looked down at the shadow caused by my feet. Ah hell. I opened the door and my breath caught in my throat.

The guy from the bar was standing in the hallway with Marco.

“What are you doing here?” I asked.

He looked at me with those teal eyes but showed no sign of recognition from our run-in outside the men’s room. “Excuse me?”

His bottom lip jutted out like he had no idea what I was talking about.

Seriously? He was gonna pretend he didn’t know me and hadn’t insulted me? Well, if that’s how he was gonna play it, so was I. “Now that you mention it…” My eyes moved over his black cargo pants and black T-shirt molded to his broad chest. “The guy I met last night was a lot better looking.” I drank in his dirty blond hair which was more tousled than it had been at the bar, like he’d just woken up. “And, he was taller. And a lot more built.”

“This is my partner, ma’am,” Marco explained.

I glared at Marco. “Kresley.”

Unaffected by my annoyance with his use of ma’am, he continued. “This is Tristan Stone. He’ll be with you when I’m not. We take turns securing locations before you arrive.” He looked to Tristan and leveled him with his eyes. “Like he did last night at the bar.”

I turned my glare to Tristan. Asshole.

He stared back at me, unfazed and not about to apologize for being deceptive.

“We were just discussing the week ahead,” Marco explained to me.

“Oh, great. I have a request.” My eyes moved between them. Tristan was younger and less bulky than Marco, but no less athletic—even though I tried to make him feel less than. “Could you maybe try to look more like college students? The dark clothes make you stand out and, frankly, I don’t want to be known as ‘the girl with the bodyguards’.”

“You are the girl with the bodyguards,” Tristan clipped.

“Requests don’t have to be granted,” he fired back.

I opened my mouth to respond—

“We’ll do what we can,” Marco interrupted, clearly the calmer of the two. “As long as our weapons are concealed, I don’t see why we can’t try to blend in a little more.” He turned around and walked to his room without another word.

I expected Tristan to follow him, but he didn’t.

Perfect. “Let’s just get this out of the way now then,” I said to Tristan as Marco’s door closed. “I don’t know what your problem is with me—”

I trudged on, getting more pissed by the second. “You work for me. A little common courtesy is not too much to ask.”

He rolled his eyes.

God dammit. “If I can’t trust you to protect me if things go wrong, my parents can find someone else who can.”

His eyes narrowed. “What the hell does that mean?”

“This whole not knowing me thing after you blatantly disrespected me last night. Maybe I didn’t know who you were at the bar, but you knew who I was. So, what gives?”

My head shot back so fast I was surprised it didn’t slam into the door behind me. “Excuse me?”

“You were almost taken in France.”

“Thanks for the recap. But I know what happened.”

He shook his head, his teeth clenched and jaw ticking. “You’re careless.”

I pointed to myself. “I’m careless? I’ve got two bodyguards for Christ’s sake.”

“You get one life to live. Think about how you want to live it.”

“It’s no secret there are people out there who still may want to get to you.”

“So, why the bar? Was it absolutely necessary to go out last night?” he asked.

“What I do is none of your business.”

“The hell it isn’t. I had to be there an hour and a half early—with added security—securing the place, not to mention overseeing every fucker they let in there.”

“I could have been someone trying to get to you,” he continued. “But you were standing there all drunk gazing at me like you would’ve gone home with me if only I asked.”

My mouth parted, too stunned by his words to respond.

“And then that ridiculous necklace you wore. It must be worth tens of thousands of dollars. Way to stay off people’s radars.”

“I’ve been through enough counseling to know what happened to me was not my fault.”

“The thing was like a damn beacon signaling that you’ve got money.”

“Fuck you,” I spat, unsure what had come over me. I’d always been taught to remain proper and composed, even in the most difficult situations.

His features remained stoic, totally unaffected by my words. “Not a chance.”

J. Nathan is the author of new adult, sports, and rock star romances with cocky heroes and sassy heroines. When she’s not writing, she’s a crazy soccer mom and a total romance junkie! She loves country music, guys in backward hats, Peaky Blinders, and the summertime.