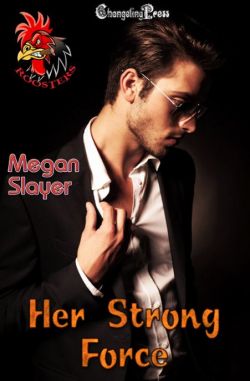 Heather McGraw doesn’t want to strip forever. She has plans for her life and stripping seems like the right choice to make enough money to pay off her debts. She’s not looking for love, but what if love finds her?

Mario Black can’t take his eyes off Heather. The young woman isn’t a natural on the stage, but she’s got a certain innocence and she captivates him. He wants her. When he’s given the chance to protect her while she moves from the stage to the Jordan family inner circle, he’s thrilled.

A demon from her past wants to ruin her future. Can Mario give her the protection, devotion and love she wants while protecting her heart?

Preorder for July 31st at retailers…

“Positive. I want you to design other costumes for the girls. Your design is better than anything they’re coming up with, and if you’re the creator, then the outfits will be exclusive to this club,” Christy said. “I saw your sketches and suggestions. You’re good, and I want your exclusive stuff.”

“If they hate me for being new and pushy, then they won’t allow me to design for them. I’m the butt of jokes,” Heather said.

“I know, and I’ve got a plan. You don’t deserve to be the butt any longer.” Christy chuckled. “I’m assigning you a bodyguard and a better wage. You should be designing, not dancing.”

“A raise?” She sighed and shook her head. “Are you sure?” A job and a bodyguard? “Why do I need protecting? So the bodyguard can ward off insults?”

“Not exactly, but I like your style. I want him to keep the girls away so you can create, and when it’s time to dole out your costumes, then they won’t turn them down,” Christy said. “Plus, when the girls see what you can do, they’ll all want your attention. Promise.”

“They aren’t exactly my fans,” Heather said. “They’re more likely to kick my ass than like my costumes. They’ll be happy to see me go, and if they see I’ve gone with a bodyguard… it’ll get worse.”

Christy crinkled her nose. “Are you sure?”

“Why don’t you take the night and think about it?” Christy patted the table. “While you’re thinking, I want you to meet Mario. I’m telling you, you’ll want him around. Tall, dark, handsome, muscles… he’s sin on legs.”

A man, the one Heather supposed was Mario, joined them in the box. He said nothing and folded his hands.

Heather fought the urge to squirm under Mario’s inspection. She wished she weren’t wearing a corset with her chest spilling out of the cups. She felt so revealed. He looked a bit familiar, but not much. Had he been working there the whole time?

Christy stood. “Mario, take Heather to the dressing room and help her collect her things. Once you’re done, take her to the house. Get her whatever art supplies she requires.”

“Yeah,” she said and allowed him to direct her through the club. “Sorry.”

Mario rested his hand at the small of her back. A couple of the dancers waited backstage. Heather swore she heard one of them say she was being escorted out. Embarrassment swept over Heather. The dancer wasn’t wrong.

She stopped at her makeup table. “They do.” She shoved her things into her bag, then cleaned out the drawers. Instead of dressing, she donned a long coat. Tears burned at the corners of her eyes, but she swore she wouldn’t crack. No way. The girls had seen enough.

Mario helped her into the coat. As she bent into him, he murmured, “Play along.”

Mario tucked her to his side and carried her bag. “Got everything, babe?”

Babe? She fought the urge to roll her eyes. She had to trust him. “One more thing.” She pulled her nametag off the mirror. The poor thing looked so barren and sad. “Yeah.”

Carla, one of the popular dancers, a tall, raven-haired beauty, sauntered up to Mario. “I haven’t seen you here in forever, baby.” She nudged Heather aside and embraced Mario. “Want a private dance?”

“I can’t.” He smiled, then disengaged from her. “I’m escorting my girlfriend out. I decided I don’t want to share her.”

Carla narrowed her eyes. “Her?”

“Yes.” He threaded his arm around Heather. “Is that an issue?”

“Duh. You can do better,” Carla snapped. “I did you better. All she’s got are big boobs.”

Heather’s ears burned and her cheeks heated. She wanted to leave. “Mario?”

“Yes.” He sighed and smiled. “We need to get home. I’m tired and want to relax.” He nodded. “Good night, Carla. Heather?” He nudged her forward to the door.

Heather didn’t look back. She had to act confident. She tucked into Mario and basked in the sweetness of being held. She liked the way he smelled and the strength in his body. If nothing else, he gave the impression she was someone special. She hadn’t been that in a long time.

Mario directed her out to the parking garage to a black car. “Here we go.”

“You don’t have to take me home.” Heather pulled her car keys out. “I have my own ride.”

“Why don’t you let me drive? I’ll explain Christy’s decision and take you to the compound.” Mario widened his stance. “It’ll make more sense if we talk.”

“I have an apartment and my cat. I won’t relinquish them.” She shook her head. “It’s fine. I’ll just go home.”