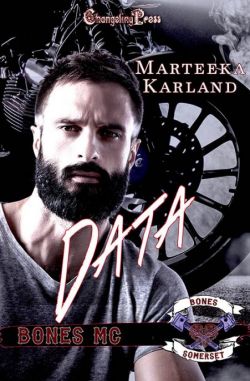 Zora: I live a life of wealth and luxury. There isn’t anything I can’t have. Except my freedom. So I turned to the computer for friendship. And that’s where I met my match. More than my match And when my life suddenly falls apart, he’s the one to find me. But he’ll also be the one to rip my heart in two.

Data: I’m not good with people. It’s why I stick to my computers. When my online partner and friend ends up in trouble, there’s no way I’m letting her go it alone. I was expecting a mature woman when I pulled up in front of her house. But the girl is barely eighteen.

Preorder for July 31st at retailers…

One by one, the riders shut off the bikes but didn’t get off them. Only one man took off his helmet and approached the house, a horrible scowl on his bearded face. Zora quickly jumped up and went inside. She tried to close the door, but the man was on her already. He didn’t grab her but shoved his foot inside the door so she couldn’t shut it.

She squealed, shoving her weight against the door. Like that was going to help if the man really wanted in. She was so slight there wasn’t enough of her to deter him.

She was so shocked he knew her name, she obeyed. Then she blinked several times. “D?”

“Data,” he corrected. “And you are in so much trouble, you can’t even conceive.” As angry as he sounded, Zora thought he’d pull her outside, but he didn’t. He held open the screen door and stepped back so she could come back outside the house. When she didn’t readily comply, he raised an eyebrow. “I will carry you if you don’t come out on your own.”

She swallowed but did as he said. Why, she had no idea. Of all the ways she’d envisioned meeting her online friend, this wasn’t it. And what was with all the bikes? She’d also thought he was closer to her age. Sure, the remark about spending time with his daughter had registered, but she’d just assumed his daughter was a child. She hadn’t asked and he hadn’t volunteered, but when she’d imagined what he might look like, it was as a college guy. Maybe slightly older. The reality couldn’t have been further from the truth.

This man — Data — was in his forties, bearded, and heavily muscled. He towered over her. She was only five foot three, so she guessed he was at least six-three or -four. Looking at the men behind him on their bikes, talking amongst themselves, she noticed they glanced toward Zora and Data occasionally. They were all just as big and just as strong. Just as intimidating.

Date gestured for her to go back to her perch on the swing where she’d been before, and he took one of the chairs next to her. For long, long moments, he sat looking at her, his forearms resting on his thighs, fingers laced together.

“Why the fuck didn’t you do what I told you to?” He didn’t raise his voice, but the message was the same. Data wasn’t happy with her. At fucking all. “Where’s your phone?”

“I left it at back at Gordon’s house,” she squeaked.

“And the burner I told you to buy? You know, the one you were supposed to use to text me with your location so I knew where you were and had a way to contact you?”

“I forgot it, OK?” Her voice was firm and a little irritated. There. She’d found her spine. Finally. Mostly.

“Do you have your computer?”

“Yeah. But I’ve been so busy trying to get myself set up here, I haven’t been online.”

“Believe me, I’m fully aware. I’ve had our private chat open for days. I had the program set to notify my cell if you came online. My phone has been by my side or in my fuckin’ pocket constantly.” The more he talked, the louder he got, his anger obviously building. He didn’t shout at her, but his frustration with her was more than obvious. Finally, he closed his eyes and took a deep breath before continuing. “I was fuckin’ worried sick.”

She blinked several times. “What? Why would you worry about me? I can take care of myself.”

“I’m aware. Doesn’t change the fact I like knowin’ you’re good.” There was silence between them. An uncomfortable one where she fidgeted and he just stared at her, his expression unreadable but intense. “Did it ever occur to you I might care about your wellbeing?”

Of course. She got it now. Just like everyone else in her life, he worried about her abilities being taken away from him. And be Goddamned, it hurt. “I’m sure you could find any number of hackers willing and able to help when you need it,” she said, unable to keep the pain from her voice no matter how much she wanted to act like it didn’t bother her. “Hell, you’re much better than I ever thought about being. It’s not like I put you in a bind.”

He sat up straight. “What the fuck did you just say to me?”

She shrank back. This wasn’t her D. This man was scary. And an asshole, but she wasn’t saying that out loud. “I said it wasn’t like I put you in a bind.”

“Data!” One of the men called warningly from his bike in her driveway. “Simmer the fuck down, brother.” That was surprising, but not unwelcome.

Data scrubbed a hand over his face before stroking the front of his beard-covered chin with a couple of fingers. “Look,” he said. “Did it ever occur to you I might be worried about more than your abilities with a computer? Maybe I was concerned about my friend. Ever fuckin’ think of that?”

“Yeah. My friend.” Data shoved himself out of the chair and held out his hand for her. “Come here, cutie.”

It was that nickname that made her stupid hand land in his and her body allow him to pull her to her feet. The next thing she knew, he’d wrapped her up in those strong arms and hugged her tightly. She was so much shorter than him, he just picked her straight up, her legs dangling in the air.