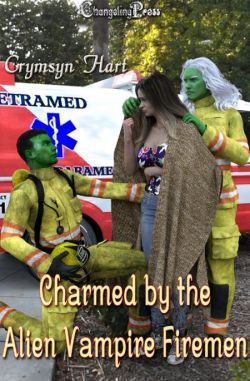 When Ember’s apartment burns down, two firemen offer their guesthouse for her to rent out. Not able to sleep on her friend’s couch any longer, she takes them up on their offer. One night smo

ke pours from their house. She rushes in to help them and discovers their secret.

With her restaurant being bought out from under her, Ember’s life is unraveling. She doesn’t know if she can trust her landlords. Someone knows what they truly are and kidnaps her to pressure her for information about the firemen. When she doesn’t talk about her green-skinned firemen, the situation only gets worse.

As love grows between Ember and her aliens, the world closes around them. She needs to get closer to them, but men invade their home. In order to save them, she will have to give up everything she knows. 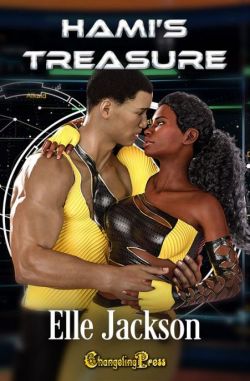 Kilfanian Captain Hami comes to Earth to find his missing sister. But when his ship inadvertently causes a fire in a science building, he sees the glowing multicolored path that legend says leads Kilfanians to their mates. He follows that path into the blaze and finds a beautiful Human woman dying of smoke inhalation. To save her, he takes her to his ship for treatment.

Astrophysicist Amina Washington never expected to be abducted by aliens — especially not one so handsome and seductive. Amina is torn between their growing love and her need to return to Earth with proof of the existence of aliens.

Captivated, Hami finds himself questioning everything he believed about humans. Yet he and Amina are literally from different worlds. Can he find a future with a human woman who makes him want to be more than just a warrior of Kilfane? Especially when her people abducted his sister? 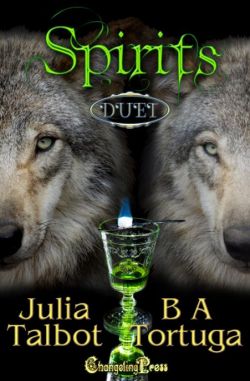 Moonshine: No one expects a werewolf to be running a moonshine still. Hell, a ridgerunner? Sure. He’s seen that coming from birth. What he didn’t inherit was lycanthropy. But life’s full of the unexpected. And now there’s David, self proclaimed expert tracker, and hunter of the bastard who turned them both. David is just the kind of trouble Jenson doesn’t need, and everything he wants.

Absinthe: Barthe and Rene have a real mess on their hands. Years ago, Barthe made a stupid mistake. Now Rene’s not sure he can believe Barthe will ever really want him. Add to their dilemma Barthe’s brother Bastien, and a werewolf caught half shifted… Can they come back together before they lose their love forever?