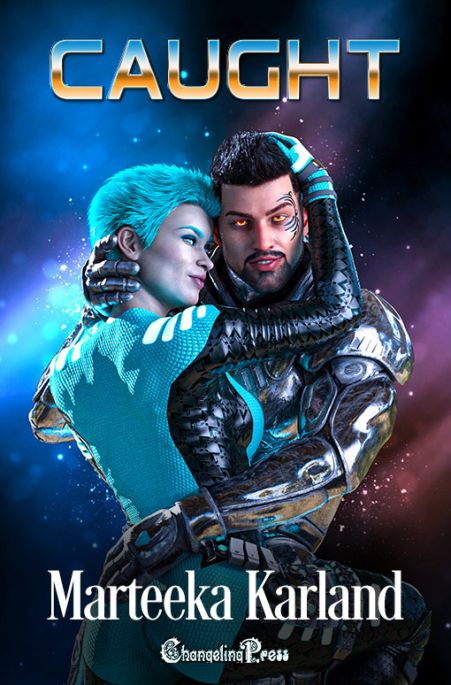 Zuri Starbreeze is a bounty hunter on the trail of the catch of a lifetime. Her prey is a cold-blooded killer wanted dead or alive in every known system, and for good reason. Eight hunters have already died trying to bring him in.

Flat on her back, writhing and screaming in pleasure, Zuri has a choice. She can resist and risk the wrath of a killer, or submit — and risk losing herself in a den of lust, kinky bondage, and wild sex. One thing’s for sure, no matter her choice, she won’t come out of this the same.

Get it today at Changeling Press

preorder at retailers for May 8th

Almost. She almost had him. Zuri studied the feed she was getting from the surveillance satellite she’d commandeered. Cade Brighton was as good as caught.

She’d spotted him five days ago on the war-ravaged planet of Dyson 4 and had been tracking him ever since. Finding him wasn’t even half the battle. Finding him was the easy part. Now she had to wait for the perfect time to nab him. That was the hard part.

Sitting aboard the Hunter’s Conquest, she contemplated her next move. Screwing up was not an option. Screwing up could get her dead, especially with this subject. Five of the last eight hunters who had gone after him had never returned. The other three had been returned to the Agency in corpse containers.

Being a hunter for ten years, she’d learned to trust her gut. There was something about this particular prey that bothered her. She shifted in her seat. She’d have to be extra careful.

After checking her holding area one last time, testing the alterations she’d made specifically for Cade Brighton, Zuri selected two pulsarphaze pistols and set them for heavy stun. The restriction cuffs were an afterthought. She had no illusions he would let her simply cuff him and take him in. He’d definitely put up a fight.

Body armor and personal repulsor shield intact, Zuri readied herself. She thought all the protection was probably a bit of an overkill, but she wasn’t taking any chances. Her prey — it was always her policy to think of the men and women she tracked as “prey” instead of “he” or “she” — was currently lounging in a roughneck bar. Zuri wasn’t worried about going into the bar so much as how the other patrons would react. She didn’t want to have to injure any bystanders. All the more reason for the extra precautions.

It took her thirty minutes to reach her destination on foot, but it seemed like the better choice than actually landing her ship closer to the site. Surprise was her only option. Once there, her adrenaline kicked in, and she had to take several deep breaths to calm herself. It had been a while since she’d been this hyped up about a job. Part of it was because of the dangerous reputation Cade Brighton had built for himself, but part of it was something else entirely.

Cautiously, Zuri entered the establishment. Stepping up to the bar, she ordered a drink and sipped casually while her eyes adjusted to the dim interior. This was when she was at her most vulnerable in any situation. She suspected that was the reason the lights just outside the bar were so bright. Anyone on the inside had the advantage on those entering it.

She stood at her place against the wall for another thirty minutes, making sure not only that her eyes adjusted, but that she knew where everyone in the room was located. When she spotted her prey, she knew she was in trouble.

He sat in a back booth sipping a mug of some alien brew. His eyes glowed a vibrant green in the dim light. Cade Brighton was said to have some kind of enhanced night vision. Given the eerie radiance of his eyes, she guessed the rumors of Cade’s sight were more than interstellar legend. She wondered if he was genetically enhanced as well. She couldn’t see much else. His head was covered with a loose-fitting black hood, leaving only the ends of his dark, shoulder-length hair visible. She suspected he’d allowed her to see what little she did. This was definitely a trap. She’d have to be ready for anything.