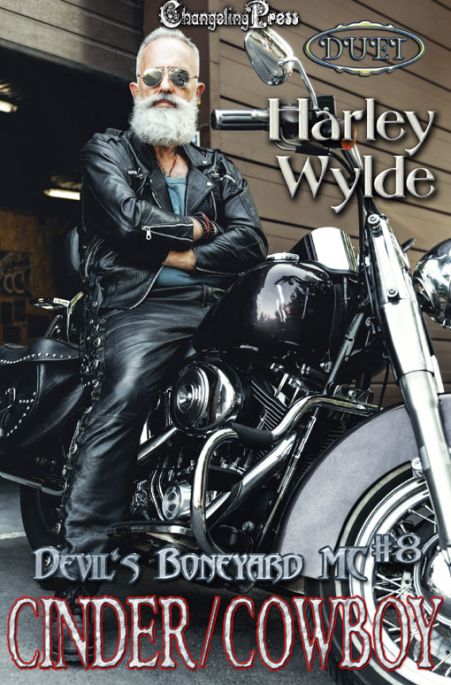 Even if I haven’t claimed her yet, she is mine, and I always protect what’s mine.

Meg: Cinder, the President of Devil’s Boneyard, makes me feel safe, and that’s something I haven’t felt in forever. I know one kiss will never be enough.

Cinder: A threat to my club has Meg under my roof. Even if I haven’t claimed her, Meg is mine, and I always protect what’s mine.

Jacey: Marrying Beck was a mistake, but I can’t leave the kids vulnerable to a monster like him. But now I have Ty… he’s everything I’ve ever wanted in a man, and I’m not sure I’m strong enough to walk away.

Ty: I’ve wanted Jacey Lane since the day I first saw her, and knowing her husband abuses her just infuriates me. Ty the cowboy might not be able to do much of anything, but Cowboy the Dixie Reaper sure as hell can.

WARNING: Please be advised there are mentions of human trafficking as well as domestic and sexual abuse and violence that may be triggers for some readers.

Get it at Amazon

After cleaning myself and the desk up, I tossed the tissues into the trash and shoved my chair back. I rose to my feet, fastened my pants, and decided enough was enough. The way she was affecting me today, I knew I’d be hard again within an hour, and I had too much shit to do to keep jerking off. I went through the house to the kitchen, where she’d dumped the laundry all over the table and seemed to be matching socks. Her hips swayed back and forth as she belted out the lyrics to whatever pop song was stuck in her head this time.

“Is all that fucking racket really necessary?” I asked, my tone a bit harsher than I’d intended.

She gasped, her hand at her throat as she spun to face me. Her wide, frightened eyes made me feel like a complete shit, but I could only handle so much. I needed her gone. Not just from my house, but from the compound. I just hadn’t figured out how to make that happen yet. I couldn’t exactly toss her out without anywhere to go or a way to take care of herself. I wasn’t that big a monster, but she was too fucking tempting.

“I can’t work with you singing at the top of your lungs,” I said. “I need to get the week’s numbers to Shade by end of the day so he can pay everyone, and it requires concentration.”

“I’m s-sorry, Cinder. I didn’t mean to keep you from working.” She glanced at the table full of laundry. “I can come back and finish this later. I was going to make lasagna for dinner with garlic bread, and I can always fold this stuff while it’s cooking.”

I ran a hand down my face, not sure how to make this clear to her without making her cry. “Meg, I appreciate you helping around here, and that you seem hell-bent on fattening me up, but I’m a grown-ass man and can take care of myself.”

“Right,” she said softly, her hands wringing in front of her. “I’ll just go, then. Sorry about the mess.”

She couldn’t quite hide the flash of pain in her eyes before she hurried out of the kitchen. A moment later, I heard the front door shut. I stared at the pile of laundry and wondered how asking for some quiet in my own fucking house could make me feel like such a bad man. It wasn’t like she was my fucking wife. I’d given her a place to stay, but it seemed she was always under my damn feet.

I went over to the table and swept the laundry back into the basket, then carried it to my room and dropped it on the bed. I’d fold the shit later and put it away. I couldn’t help but notice she’d made the damn bed already, with military precision at that. She’d been a quick study of how I liked to keep things, and made sure everything was perfect. Too perfect, if my closet was anything to go by. I had to wonder if she wasn’t a bit OCD.

Now that there was peace in the house, I could focus on the fucking reports and make sure my men were all paid. We’d sold a truck full of guns and ammo to some ex-military men I knew who had become vigilantes. Since they didn’t harm innocents, I didn’t mind doing business with them. Even the drugs we sold never made it into the hands of kids. I made damn sure of that. Anyone who bought from us knew better than to pull that shit, or they’d end up with a bullet between their eyes. These days we only dealt in pot, but I didn’t want to hear about some fifteen-year-old getting high off the stuff we grew and killing themselves or someone else.

I’d scaled back quite a bit on our illegal dealings, for the most part. We still had the chop shop and had opened a second one outside of town. The marijuana pulled in a small profit, and the guns were a nice bonus. When Scratch had discovered his daughter was alive, and he was going to be a grandpa, I’d pulled back from the heavier stuff. Didn’t want any of that blowing back on my VP’s family. Shade had said he could invest some of the club funds and double our profits, so I’d given him a few hundred grand to play with. Now he was investing over half a million on a monthly basis thanks to the nest egg those initial profits had brought in.

We’d never be completely legit, and I was fine with that, but I also didn’t want the law breathing down our necks and chance any of the men with families getting locked up. It was my job to protect everyone in the Devil’s Boneyard, down to the smallest kid. If that meant fewer illegal dealings, then so be it. I still took the odd job from the government as well, but the older I got, the less they called on me. Couldn’t blame them. I was still sharp, still had perfect vision, but I was getting old compared to the eighteen-year-olds they were recruiting.

I’d just finished the week’s numbers and stuffed everything in a folder for Shade when my doorbell rang. I rubbed my eyes and hoped like hell Meg wasn’t on my doorstep. I needed to get laid, and soon, if I was going to keep having her underfoot. I shoved my chair back and went to see who the fuck was bothering me. When I jerked open the door I saw Jordan with her two-year-old daughter, Lanie.

“Jordan, everything okay?” I asked.

She glared at me, her lips a thin line of displeasure and her eyes snapping with fire. I didn’t know who had pissed her off, but I had a feeling my afternoon just became incredibly busy. She was perfect for Havoc, but a general pain in my ass.

“Meg is crying and packing her shit,” Jordan said.

My heart stuttered in my chest. “What do you mean she’s packing? To go where?”

“She doesn’t know and apparently doesn’t care. You. Made. Her. Cry.”

Fuck. I hadn’t meant to drive Meg away completely, just out of my fucking house. Life was so much easier when I only had to deal with club sluts at the clubhouse. Adding women to the family just complicated shit and added drama I didn’t need.

“I never told her she had to leave the compound,” I said.

“No, just your damn house.” I heard Jordan’s jaw crack she was so damn angry. “If you don’t fix this shit, I’m going to leave Lanie with you. For an entire week.”

The demon spawn in her arms gave me a grin that I wasn’t about to admit scared the shit out of me. I didn’t do kids, especially not this kid. Loved Havoc, and Jordan for the most part, but their kid was damn frightening. Anyone else who spoke to me like this would have met my fist, but Jordan was a woman and I wouldn’t lay a hand on her. Not to mention, if I upset her, then she’d make it hell on Havoc, and the last thing I needed was my Sergeant at Arms being pissed at the world because his wife was being a bitch, even though that seemed to be Jordan’s default setting.

My phone started ringing in my pocket and I pulled it out, noting CJ’s name on the screen. Jordan’s brother was a pain just like his damn sister, and I had serious doubts he’d ever be allowed to patch in, even if he hadn’t been fucking up as much lately.

“What?” I demanded as I answered.

“Uh, Pres, Meg is at the gate wanting to leave. Alone. With a bag in her hand. On foot.”

I closed my eyes and counted to twenty. “Keep her there. Don’t open that fucking gate for anything.”