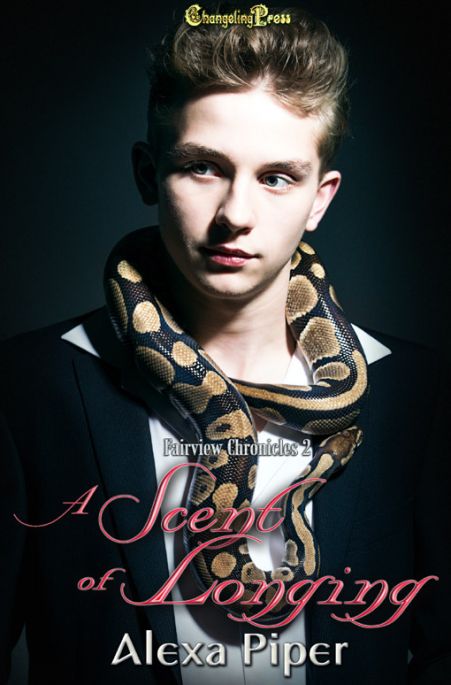 Snake-demon Asc has been healing supernaturals and humans alike for ages, and he should know better than to get involved with one of his patients. Yet, there is something about the vampire he saves from almost certain death that stirs more than just Asc’s healer’s heart.

Victor wanted to rid the world of a scourge, the vampire who made him, and all it got Victor was nearly killed. He wakes not to the light of the afterlife, but to the heat of a healer’s kiss.

Can Asc and Victor and the motley crew that is St. John Investigations put an end to Victor’s maker?

Asc turned up the music in his Toyota hybrid and tasted the air with his tongue. Cora and Valerian’s scents were still strong. Asc had volunteered to drop the pair off at the airport. I wonder what kind of mischief they’ll manage to get up to once they get to China, Asc thought and chuckled.

They were an unlikely pair, an untrained mage and an untrainable taotien, but Asc could see beyond that. He was glad they were happy, and happy together. And maybe if he can learn to annoy her less, Valerian won’t get burned by Cora’s mage fire. Asc chuckled again. Though some slight singeing might be beneficial.

Half-frozen rain began hitting the windshield. The late February day had been cold and wet and gray, but the sleet had waited until Asc was on his way back home from Fairview Airport. With rush hour long over, the streets were almost empty, and the city’s lights were fighting hard to keep winter’s early nightfall at bay.

Asc was almost back home in Chinatown when something in a side street caught his attention, made his skin tingle. He pulled over and got out of his car. The cold was uncomfortable. It bit into his skin and made his muscles want to slow. Yet, there had been a flash of something there. Something had called out to him through the dark and cold, and Asc wasn’t one to ignore any creature’s call for help.

The side street was scarcely lit and dominated by heaped trash spilling out from an overfull dumpster. Asc tasted the blood on the air before he could actually see the person, crumpled on the asphalt in among the waste.

“Hey,” Asc said, and moved. Another sip of air on his tongue confirmed the person was still alive, even before he reached him and slowly, carefully, moved away the detritus to turn the man on his back. He was a vampire, and hurt badly. Asc noted the slashes along his limbs, the skin torn where the veins ran. Some cuts were even deeper. He had been stabbed in the torso as well. The clothing, a blood-soaked mess, had been shredded with whatever had cut him up.

“Hey,” Asc said again as he pulled back the vampire’s eyelid. The pupil responded to the light, however sluggishly, but the vampire seemed to be out of it. No wonder. He’s lost a lot of blood.

The blood loss, however, meant that Asc couldn’t inject him with his curative venom, because there wouldn’t be enough circulation there to do any good, especially not with a vampire, whose blood pressure was lower than a normal human’s to begin with.

Without a better option, Asc draped one badly sliced-up arm over his shoulder and dragged the man to his car. At least home was close.