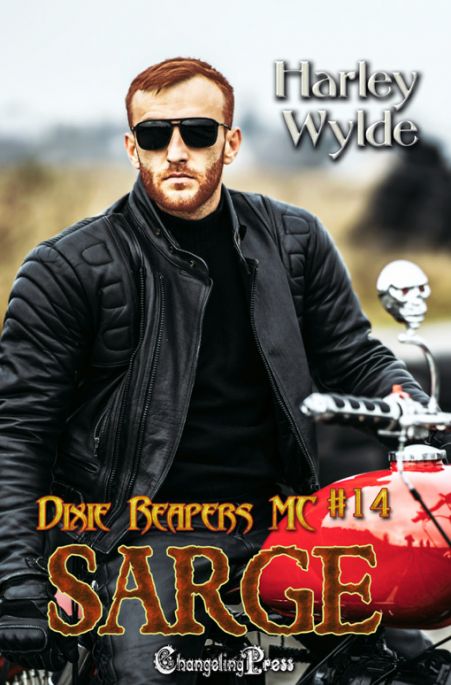 Katya — I never thought the day would come that my father would sell me to the highest bidder. Oh, he called it marriage, but I knew it was only to advance his rankings in the Bratva. Like I cared about that. But before he ruined my life, I knew I had to get my nephew to safety. My sister had told me of the man who got her pregnant, but not exactly where to find him. With Liliya gone, I needed to get Theo to safety before the shackles on me tightened even more. It never occurred to me the man would be sexy, or so alpha. The bearded beast just made things harder because now I don’t want to leave, and I know if I don’t that hell will come knocking.

Sarge — Never knew I had a son, nor did I know his mother had a sister. Seeing her haul back her fist to take down a Prospect was the hottest thing I’d ever watched, and I knew then and there she’d be mine. No matter how much she protests, I’m not letting her go. She might be worried I’ll get hurt, but let the Bratva come for her. They’re not the Boogeyman, and I’m not scared of them. She’s my fierce kitten, and I’ll do whatever it takes to drive that home to her, even if I have to tie her to the bed and remind her over and over that she belongs with me.

WARNING: This book touches on sensitive issues that may be difficult for some readers. But there is no cheating, no cliffhanger, and a guaranteed happily-ever-after.

The more miles I put between myself and my family, the more the knot in my stomach eased. I glanced in my rearview mirror every ten minutes, maybe less, to check on the precious cargo I carried. My sister’s child, Theo, slept soundly in his car seat. No one would care that Theo went missing, but my absence would be noticed. With Liliya no longer a viable option, my father would try to pawn me off on one of his friends to strengthen the empire. His words, not mine. The moment my sister had returned, pregnant, I’d known it was only a matter of time. I’d end up marrying the same man she’d been slated to wed.

Until my sister had gone missing about six years ago, I’d been left alone to do my own thing, which had been amazing. Then Liliya had vanished into thin air and my father had put more pressure on me to change and adapt to the way a Voronin should behave. Whatever the fuck that meant. I refused to be the dutiful little girl and marry whatever goon my father sold me to, and that was essentially what it would be. I’d thought about seeking asylum from Viktor Petrov. It was no secret that he looked more kindly on women since marrying, but I didn’t know that he would care about my fate. My father was so far down the hierarchy that I was beyond a nobody.

I’d deactivated my GPS on my car, and left my phone at home. I’d grabbed a pay-as-you-go phone so I wouldn’t be without a way to call for help should the need arise, but no one knew the number. I’d added any contacts I might need, but hadn’t used the phone yet. There was no way they could follow me, but it didn’t stop me from checking my mirrors every few miles. I didn’t have much to go on. My sister had told me that Theo’s father was a guy called Sarge, and he was part of some biker gang or club called the Dixie Reapers down in Alabama. I’d not dared to ask around back home, but I’d hit the road heading south, and stopped when I saw a group of bikers a few hours into my trip. I’d asked if they’d heard of the Dixie Reapers, and they’d pointed me in the right direction.

I only hoped they didn’t remember me. If my father sent men in this direction, I didn’t want anyone to recall that I’d been there or the questions I’d asked. The last thing I needed was anyone putting my father’s guys on my trail. They were like damn bloodhounds already. If they caught a whiff of my trail, it would be a miracle if I reached Alabama before they found me, but I had to try. I owed it to my sister to make sure Theo ended up with his father.

I ached from head to toe by the time I pulled up in front of the gates of the Dixie Reapers’ compound. The sun had already risen, and I was so exhausted my eyes hurt. Resting hadn’t been an option, so other than breaks to use the bathroom, take care of Theo, or grabbing a bite to eat, I’d pushed through. There was a guy standing guard who eyed my car with a sneer. Great. Already off on the right foot as usual.

Rolling down the window, I peered up at him, hoping my bloodshot eyes didn’t make me look like someone trying to find their next fix. It was laughable since I’d never even had a drink or smoked a cigarette, much less done drugs. Not to mention the kid in my back seat, although I supposed if I was hooked on meth or something I wouldn’t give a shit if the kid was there or not.

“Whatever you’re looking for, you need to find it elsewhere,” the man said.

He was shaking his head and backing away before I could even explain why. Anger burned hot inside me. I hadn’t driven all this way, risking my life and my nephew’s, for this asshole to not even let me speak to the guy. I threw open my door and got out, stomping toward him in my Doc Martens. My sister had always called them my badass bitch boots.

“Listen here, you little prick, I need to see Sarge, and I’m not leaving until I do,” I said, planting my feet shoulders-width apart and folding my arms over my chest.

He eyed me up and down, then snorted. Yeah, okay, so he was a good foot taller than me. Maybe little hadn’t been the right word. Then again. I eyed his crotch so he’d think that’s what I meant, and with him being such a dick, maybe he really was overcompensating for something.

“You bitch.” He snarled and came after me, but I stood my ground. I saw the fist coming and waited until it was nearly kissing my cheek before I ducked and planted my own against his ribs. Thank you, self-defense classes! I was so grateful I’d been sneaking off to a gym between classes.

“Enough!” another man shouted as he approached from inside the gate. “What the fuck is going on, Prospect? We don’t hit women. Especially little pixie girls who look like they weigh ninety pounds soaking wet.”

“He refuses to let me speak to Sarge,” I said.

His gaze sharpened on me. “Russian?”

I bit my lip. The way he said it made me think maybe I wasn’t welcome here just because of where my family came from. I’d thought I’d learned to control my accent better, but apparently I was wrong. I knew Liliya had learned to mimic accents from anywhere in the world and had probably passed for one of the regulars around here. I wasn’t so lucky.

“Answer me, girl,” he demanded, his voice deep and growly.

His lips twitched like he was fighting not to smile, then he glared at the guy he’d called Prospect. “You get the shit job of cleaning the clubhouse bathrooms for the next week, and those damn things better sparkle regardless of what time of day it is. I don’t care if you have to use a fucking toothbrush to get it done. Understood?”

“Yes, sir.” The guy’s jaw tightened and his face flushed. I could tell he was pissed. I’d probably just made another enemy.

“Let her through.” The man looked at me again. “Park in front of the large building right there, and don’t wander off or I can promise you won’t like the consequences.”

Was it wrong that gruff tone paired with his words made my thighs clench and my panties dampen? I’d never been with a man before, but this one was almost enough to make me change my mind. I’d decided long ago they were more trouble than they were worth. Besides, I could get myself off so what was the point of letting some guy sweat all over me?

I got back in my car and pulled through the gate, stopping in front of the building. I left the engine running so the car would be comfortable for Theo, then I got out and shut the door. Leaning against it, I waited for the older man to come over and talk to me. As he drew closer, I looked him over. Tall, far taller than me, and broad but not bulky. He was muscular without looking like he went to a gym for hours every day. Then my gaze landed on the leather covering his shoulders. Sarge. Shit. This was the man my sister had slept with?

Sighing, I dropped my gaze. So much for my interest in a man for the first time in my life. Figured it was the guy who broke my sister’s heart. Just another reason to stay single. Men were too much trouble.

“What do you want with me?” Sarge asked.

Harley Wylde is the International Bestselling Author of the Dixie Reapers MC, Devil’s Boneyard MC, and Hades Abyss MC series.
When Harley‘s writing, her motto is the hotter the better — off the charts sex, commanding men, and the women who can’t deny them. If you want men who talk dirty, are sexy as hell, and take what they want, then you’ve come to the right place. She doesn’t shy away from the dangers and nastiness in the world, bringing those realities to the pages of her books, but always gives her characters a happily-ever-after and makes sure the bad guys get what they deserve.
The times Harley isn’t writing, she’s thinking up naughty things to do to her husband, drinking copious amounts of Starbucks, and reading. She loves to read and devours a book a day, sometimes more. She’s also fond of TV shows and movies from the 1980’s, as well as paranormal shows from the 1990’s to today, even though she’d much rather be reading or writing.
You can find out more about Harley or enter her monthly giveaway on her website. Be sure to join her newsletter while you’re there to learn more about discounts, signing events, and other goodies!
Harley at Changeling Press | Website| BookBub | Amazon