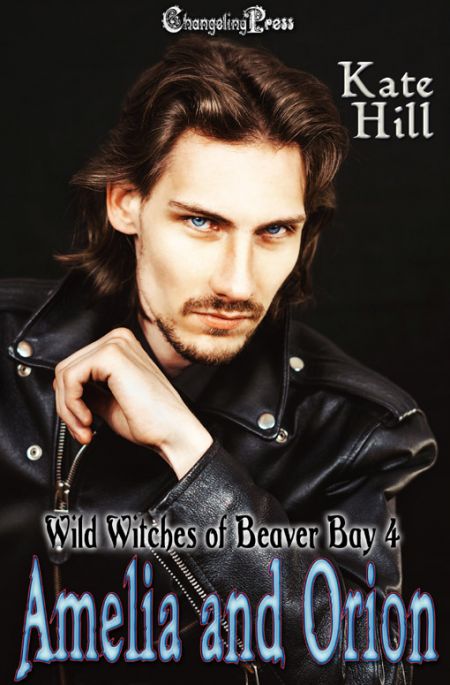 Demon. Vampire. Human. Orion is all three. From the moment he met Amelia Wild, his heart has belonged to her, but a hybrid like him doesn’t have the luxury of falling in love.

Amelia Wild sometimes regrets not sharing her family’s magical gifts, but she has one of her own — a genius level IQ that she uses to uncover scientific ways to fight supernatural creatures. For years she has loved her business partner, Orion, but he has made it clear they will never be romantically involved.

When Orion’s emotional restraint becomes too much, Amelia heads to her family’s ancestral land to get in touch with her magical roots. Lost without her, Orion follows Amelia to the Wild family cabin. Will this irritable half-demon and a brilliant witch finally surrender to the powerful attraction between them?

Orion’s booted feet rhythmically thumped the forest ground. The scent of damp earth filled his every breath. Misty wind snapped against his face. His inhumanly sharp senses heightened during the chase. The others — at least the ones who were still in the game — closed in. He smelled and heard them.

He stopped to climb a nearby tree and pulled himself onto a thick branch where he crouched, watching, his heart pounding. It didn’t take long for his harsh breathing to slow to almost normal — the result of good conditioning and superior genetics.

He wouldn’t be safe here forever. They were near.

He had taken down most of the demon hunters chasing him, but two new recruits had joined their hunt today and they weren’t experienced, but distressingly talented.

Orion tensed and shifted his position just before a rock nearly struck his head.

Orion shifted his gaze to Joel Connor — the newest member of the “family.” Like Orion, he was around average height, whipcord lean, and an accomplished athlete — however, today’s competition was for higher stakes. No prize or title. Just survival.

Orion smirked. “You’re a talented monkey, but you missed.”

“First, that was just to wake you up. Second, if I’m the monkey, then why are you the one sitting in a tree?”

And crafty. If Joel wished, he could climb after Orion in a blink, but he wasn’t working alone.

Inhaling a bit deeper, Orion grinned. Not that he needed to catch Jeff’s scent to know he was coming. Jeff was rather heavy-handed with everything he did. Stalking the woods in silence wasn’t a skill he’d mastered yet, even with the help of his feline spirit twin. Of course a saber tooth cat hadn’t been the smoothest predator in its day, but powerful, as Orion’s close friend, Starr, had reminded him when they’d prepared for the hunt.

“You’ll have your work cut out for you,” Starr said.

“I know. It’s always good competition, but Jeff is one of the strongest spirit twins the family has seen in years. If he catches me, he’ll knock me into tomorrow.”

Starr met his gaze. By now, neither mentioned the power Orion repressed. If he used it, their battle game would be to the death. The hunters would have no other choice. Without that boost, however, the hunters could do him serious harm. These games were to keep each other sharp — injuries were normal, but there was a line they couldn’t cross.

“Remember, Jeff is strong, smart, and he’s used to working with a team. That’s a great combo for us and bad news for a target.”

He and Starr had known each other since they were fifteen. Starr was like a brother, and these demon hunters the closest thing to a real family Orion had ever known. Except for —

“Ah. He approaches.” Orion snapped back to the moment. He tightened his grip on his chain whip — a formidable weapon when wielded properly, and Orion was an expert.

Joel didn’t speak, but jabbed his palm toward Orion. An unseen force struck him in the chest and he nearly fell out of the tree.

When had Joel developed this particular power? Though inexperienced, the witch warrior was full of surprises.

Joel must have hit him harder than he thought because the tree seemed to shake.

Oh. Because Jeff had leapt onto it and hauled his six-foot-three-inch half human, half saber tooth cat body toward Orion’s branch.

Orion dropped lightly to the ground, where Joel attacked. For several seconds they traded kicks and strikes before Jeff leaped out of the tree, no doubt aiming for Orion, but landing on Joel instead.

Orion backed away, smirking again. “Such precision, Jeff. Thank you for your assistance.”

Jeff knocked Orion flat on his back. Pain jabbed behind Orion’s left ear. Jeff loomed above Orion. His dark eyes blazed and his giant fangs hovered inches from Orion’s face.

They glared at each other, and a twinge of apprehension shot through Orion. He didn’t want to use his full demonic powers on any member of the family, but he didn’t know Jeff well yet, and he would do whatever necessary to defend himself.

Then Jeff rose to his feet, dragging Orion with him.

Jeff’s fangs shrank and the shaggy coat covering him from head to toe receded, leaving him with a relatively human appearance. “I got a little carried away.”

“Slightly. For a moment I thought you might try to eat me.”

Orion narrowed his eyes at Starr.

“I don’t know about you all, but that was a great workout,” said Amber, Starr’s mom. The tall redhead strode toward them.

Despite her rough edges, Orion liked her. For over fifteen years, Amber had been more of a mother to him than his own ever had. Once Starr had brought him home, she had given Orion the same tough love as every other member of the family until he finally believed he was part of them after all.

“Yeah, Amber, that was something,” Jeff admitted. “It’s amazing that we can practice on an actual demon without the danger.”

“Hmm.” Orion leveled his gaze at Jeff. “Maybe I’m not doing it right, then.”

“Trust me, there’s plenty of danger, and speaking of that, is anyone besides Orion hurt?” Amber asked.

Orion absently swiped at moisture trickling down his neck and glanced at his hand to see it streaked with blood. He’d thought it was just sweat. “A scratch.”

“Sorry about that,” Jeff said. “Must have been when I knocked you down.”

Orion waved off his apology. “It’s how the game is played. Enemies don’t show mercy.”

“We’re not enemies.” Joel stared at him. No doubt he was contemplating whether it was true. Like any new family member, once they learned Orion’s heritage, they automatically mistrusted him. Being a three-way hybrid made him an object of suspicion.

“I get it,” Jeff said. “We need to be hard on each other because the enemy will be worse.”