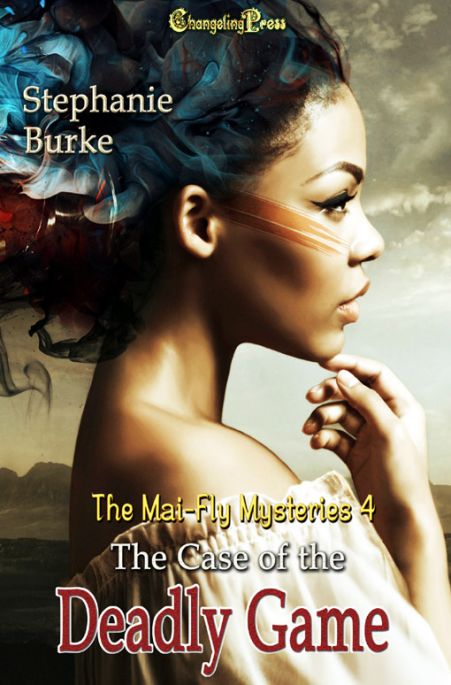 Mai’s Epic Journey is almost to an end, but a rest break in Lightwater, England proves to be more trouble than it’s worth. Now there’s a dead body, a hell hound, a Fire Goblin, and once again Mai is at the center of it all.

When you’re playing a Deadly game, someone always gets hurt.

The woman stared up at Mai, her dark eyes intent as she gripped Mai’s hand hard.

On either side of her desk, the duly appointed and armed guardians of the gate tightened their hands on the handles of their batons made with blessed iron, their badges setting off a faint warning pulse that only those of the Fae blood could feel.

“Human, huh?” Mai returned as the woman’s hand tightened on her wrist, staring into the woman’s eyes, daring her to do or say something.

Mai was not in the mood. After a seven and a half hour nonstop flight from Baltimore to Gatwick in the UK, even traveling first class grated on her nerves.

She had already received confirmation that Ry’s body had arrived in Cardiff and was going directly into the hands of his clan for safekeeping though her Court could not pass back into Fae lands without her, as a new Queen, being there as an escort. Even in death, he was still a member of another Queen’s Court and by Fae law, he couldn’t even travel into the grieving hands of his mother unless Mai was there to allow it. But in order to get there, Mai had to first obtain permission from the British authorities, those who guarded the gate into Fae, and she had to clear this fucking customs gate.

At least his body didn’t have to go through the comprehensive background and magical checks at the gates of Gatwick Airport with what could be a deranged human whose name was… Mai paused in her musings to stare at the nametag of the once cheery and bubbly… Karen. Her whole attitude had changed when it came to Mai, compared to everyone who had come before.

“First time?” The woman was sitting behind a tall desk that stretched across the front length of the exit gate. It was the last obstacle blocking a barred exit that led to the outside. Mai had looked around at the warded area, saw a magic meter nearly as tall as she was off in the corner, what had to be a dozen of those security guys standing around and looking menacing, the tall cold iron bars that blocked the only door to the outside, and then back to the cheery smiling woman who had chirped at all the others until her. The shock of it all had been almost enough to leave her speechless.

“Well, yeah,” Mai had shaken herself mentally and got her mind back on business, ignoring the insanely dangerous vibes she got from those security agents. “First time here.”

Before Mai could move, Ptris who had been placing a formal looking envelope on the desk, returned the woman’s smile with a blank stare that didn’t affect her aura of happiness at all. It was really too early for that crap and there wasn’t enough coffee in Mai’s body to deal with the fake giddiness that the woman was throwing off, or at least not deal with it with anything approaching grace.

“Oh, how exciting!” The woman had all but bounced in her seat. “A new court is forming, and from The Americas no less. You don’t see that every day.”

When silence was her only answer, the woman had just giggled to herself and began to go through the paperwork. It was their passports, their travel visas, their itinerary, and the paperwork declaring who and what they were.

“Entranced human?” she asked, looking up at Austin to match his photo to his passport and he proudly waved his hand. “You don’t see that every day. You don’t have a birth certificate…”

“I was born before the department of vital statistics was created.” He chuckled. “But my papers should have my bloodwork, my clan name and affiliation as well as my date of birth and time of the willing entrancement…”

“I see,” she mused, staring at Austin to the point where Lu-Lu reached out and grabbed his hand, glaring at the woman. “Sorry, love.” Karen shook her head and turned back to the papers spread out on her desk. “I’ve never come across a human so old, though to be fair, most entrancements stopped long before the last war.”

Austin nodded in understanding. “I am unique in that regard.”

“Scotsman, are you?” she asked and he grinned. “Welcome home, then.”

She turned to Ptris, blinked twice and just stamped his papers. No one fucked with Ptris.

She stamped Lu-Lu’s well-worn paperwork — the elf traveled a lot — and then turned her gaze to Mai.

Her head tilted to the side as she stared at her and of course Mai stared back. After a few moments of this standoff, Mai realized they were in a stalemate.