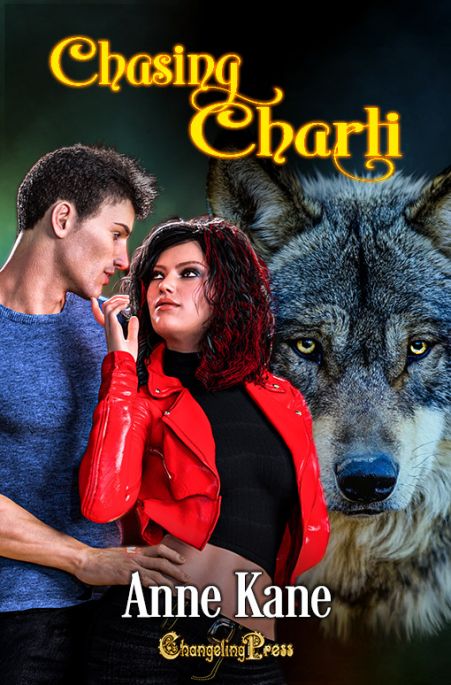 Designated bait slut. Hardly the job Charli dreamed of growing up, but as a single parent with a toddler to protect her choices are limited. She cruises the local bars looking for unsuspecting victims to lure into the pack’s clutches. The future looks bleak until she runs into her childhood sweetheart in a downtown pub.

Wyatt is in town for his semi-annual meeting with his pack’s financial advisor. This trip, though, he finds more than a good return on investment. The moment he lays eyes on Charli he realizes she is his mate, the one female who can complete his life. He’s determined to convince her to bond with him. From a tooth and claw fight with her Alpha, to reading bedtime stories to her daughter, he’ll do whatever it takes to get her to say “Yes.”

Charli glared at Henry. “Enough already. This is bullshit. I joined this pack because you promised to support my studies if I agreed to look after your pack’s health. You lied. You haven’t let me anywhere near the campus, let alone helping me actually enroll. I’m done. I want out. Let me go, and I won’t report your sorry asses to anyone, werewolf or human. I’ll just leave, and I promise you’ll never hear from me again.”

The slap came so fast she didn’t have time to duck. Her neck snapped backward and she lost her balance, landing in an undignified heap at his feet. Although he didn’t deserve the title, Henry was the Alpha and he ruled by brute force combined with a healthy dose of fear. Like the blow that had landed her on the floor, Henry’s temper could explode at any minute and often for no reason that she could understand. Living with him and his pack was like sitting on a live, ticking time bomb and wondering when it would blow up.

Right now, she didn’t really care. A pack was supposed to protect and support its members, all of its members. Since she’d been recruited, all they’d done was use her as bait. They had one gig, one way of bringing in cash and it involved dressing her up like a slut to lure a likely victim into their trap. She’d proposition them and promise to provide some very adult services if they came with her to some sleazy motel. The motels differed, depending on where she’d picked up the mark, but they were all the same run-down, grubby places. Then she’d let the pack know where to find them. If she timed it right, a couple of very scary-looking werewolves in human form broke into the room and took the mark for everything they could before she had to ante up on her promises. During the shakedown, Charli would sneak out to be transported back to their headquarters by one of the pack.

A pile of lacy material landed beside her. “Put that on and get ready. We need to make some money tonight.” Henry turned on his heels and stalked out of the room.

Time to go with Plan B. Problem was, she didn’t have a Plan B.

Wyatt took a long pull on the mug of beer, his gaze constantly moving from patron to patron in the sparsely populated pub. Habits are hard to break, and checking his surroundings was a deeply ingrained habit. Thursday nights didn’t seem to be very popular with the pub’s clientele, making people-watching less interesting than usual.

He’d been in Calgary for almost a week now, dealing with financial matters for the pack. A wry smile curved the corner of his mouth. Pack accountant. Somehow it didn’t sound quite as impressive as Alpha or Enforcer or any of the other positions in the hierarchy of the Northern Rockies Pack.

Of course, being a werewolf, Wyatt wasn’t the stereotypical desk jockey. At six foot four, he weighed in at a hefty two hundred and sixty pounds, and none of those pounds were fat. Werewolves were a lot more civilized these days but there was still the need to be able to defend the pack, and its territory even if it was rarely necessary. And then there was the DNA. No escaping the territorial, fight to the death to defend your pack brothers, instincts that were bred into his very bones.

Tonight was his last night in cow-town, which was fine with him. He had a final meeting with the pack’s investment counselor in the morning, and then he’d be on the road. The city had its good points. Wyatt enjoyed the culture, the theaters, and the shopping. Heck, he could spend days browsing the Bass Pro Shop or MEC, but he’d had enough of pretending to be human. He’d be glad to get back on pack territory and be able to change in comfort, be able to run without constantly looking over his shoulder to make sure he hadn’t been observed by anyone not of the werewolf community. Those were the kinds of things a werewolf took for granted until he didn’t have them anymore.

Wyatt lifted his mug and downed the rest of his drink in one long swallow. He gave the bartender a friendly nod, tossing enough bills on the bar to cover his tab. He stood and turned toward the doorway. Time to head back to his motel room and turn in for the night. He could feel the urge to run, but it wasn’t urgent and he’d prefer to wait until he was back in pack territory.

A faint but tantalizing scent drifted past his nose, stopping him in his tracks. Werewolf. Female werewolf. Familiar female werewolf. Wyatt turned slowly in the direction of the scent, wary of being caught on another pack’s territory. As far as he knew, there were no official packs in the city, the closest one being just south of it in the open plains, but it didn’t hurt to be cautious.

Packs tended to avoid cities for one obvious reason. Humans. There were so many of them in cities, all packed together, and that made it hard to avoid detection. Changing became a problem. Running was a serious issue. Where do you run when there are people and buildings and vehicles everywhere? Sure, you could drive out to some nice field every time you needed to change but that could be inconvenient. And, if you didn’t make it out of the city to run you risked the chance of an involuntary change. No, cities were not highly sought after pack territories.

Given the lack of patrons in the pub, it didn’t take him long to track down the source of the scent. By the wide-eyed look on her face, she hadn’t come in expecting to find another of her kind. He searched the area around her but could see no one with her, and the single glass that the bartender set down in front of her seemed to indicate she was alone.

The city just got a whole lot more interesting. Charli.