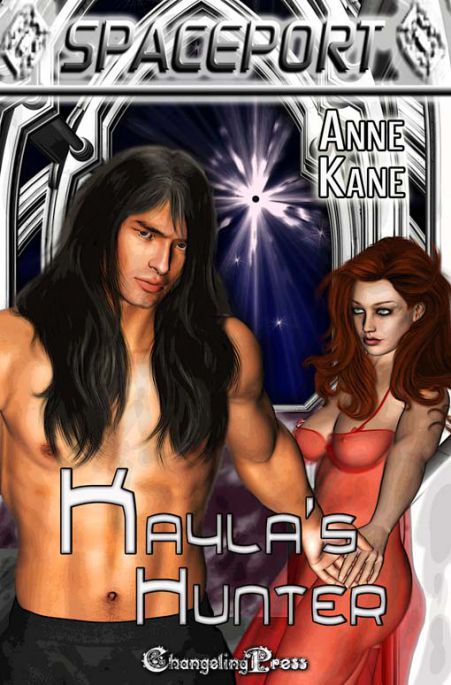 Hunter is a cyborg working for the military wing of the Interplanetary Alliance, with an obsession he just can’t shake. Four years ago, he met a woman on Rigerion IV and spent the night with her. The sex was incredible. When he woke the next morning she was gone and no matter how hard he looked, he couldn’t find her.

When he discovers that she is the captain of one of the most brazen pirate ships in this quadrant, he makes it his personal goal to track her down and punish her. Problem is, despite her status as one of the most notorious pirates in the galaxy, she was bred to be a submissive sex slave, so punishment just makes her hot! What’s a cyborg to do?

“Deploy the aft lazar array! Now!” Kayla jerked her body hard to the right, her neural implants signaling the ship to mimic her actions. She felt a grudging respect for the captain of the Intrepid as they narrowly avoided another volley from its photon cannons. This wasn’t the first battle the two ships had engaged in, but if she didn’t catch a lucky break soon, it might be the last.

“The primary engines are overheating! We need to shut them down before they blow.” Aygar, her second-in-command threw her a panicked look as he diverted more coolant to the engines. “They’ve been at redline too long.”

“If we drop to secondary engines, we might as well surrender now.” Kayla tossed her head back to clear the unruly red tresses from her eyes. “We’ll make a run for the asteroid field. If we can slip between the orbiting rubble, the Intrepid will have to break off. They can’t maneuver that big mother of a ship in such close quarters.”

Aygar nodded, his expression grim. He’d never let her down, and Kayla knew he’d do his best to hold the ship together until they reached safety.

For a while, it looked like they might just pull it off. Kayla dared to hope. The asteroid field loomed close. The Intrepid kept up a steady barrage of fire, but with her enhanced reactions, she managed to dodge the more lethal shots.

“There!” She maneuvered the ship between two chunks of space debris, a triumphant grin dying on her lips at the sudden silence. Shit! “Bring the secondary engines online. Now, damn it!”

Too late. The Intrepid’s bulk swooped in to block their only escape route.

“Damn. Damn. Damn!” Kayla slammed her fist down on the weapons’ console in front of her, gritting her teeth in frustration. Escape had been so close!

“Sorry, Captain. Those engines should have been replaced, or at least overhauled two standard years ago. I told you they were in rough shape.” Aygar stared glumly at the massive warship on the forward display screen. “Now what are we going to do?”

Kayla closed her eyes, letting out a heavy sigh. It wasn’t his fault. She’d gambled on those engines and lost. “Now we hope Hunter’s in a good mood.”