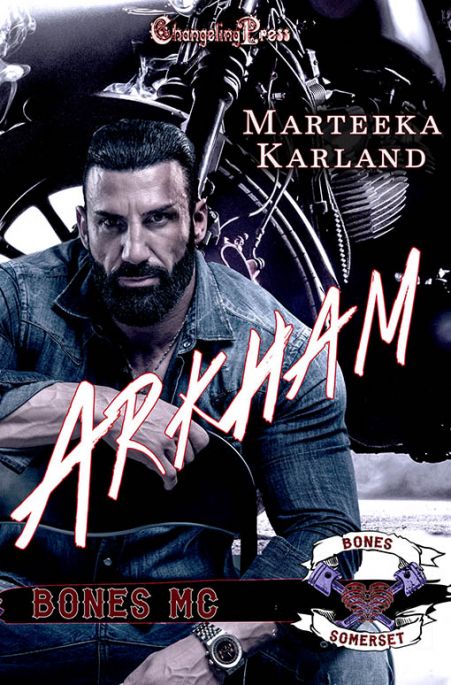 Rain — The gangs of the underground can be brutal. I know this well and have the scars to prove it. So when a team of rough-looking men start nosing around the slums of Rockwell, I make it my business to know what they’re up to. One in particular catches my eye. He’s rough and scary looking, but his touch is gentle when it needs to be. He’s older and more experienced in every way than me, but I’m still drawn to him. I’m not sure why, but I want him. And when I let him take me, I’ll savor the experience until it’s time to go.

Arkham — The little pixie warrior is a conundrum if ever there was one. She’s strong and capable but scarred inside and out. I can’t fix what’s broken inside her, but I can share her burdens and make her part of my circle. I’ll take her with me, with Bones MC. She’ll be protected there.

But who’s gonna protect her from me?

**WARNING** Bones is a rough MC. They can be violent, but they’re protective to a fault. The men love sex and the women don’t shy away from it. If you think you can handle their brand of loving… read on!

or pre-order for January 31st at retailers

“What the fuck are we still doin’ here? We cleared this sector yesterday.” Arkham wasn’t usually one to complain, but this micromanaging shit was for the birds.

“You pay, we come play.” Torpedo was the top man in the field on this mission. He and Arkham took point as they walked down the street. They weren’t in Afghanistan or Tripoli, or Ukraine. They were in a moderately sized city in the good ole U. S. of A. called Rockwell. ExFil had been hired by a group of disgustingly rich hero wannabes to help locate a runaway. Kid had been missing for three days, and his mother, who was a member of the staff of said disgustingly rich hero wannabes, was more than frantic. They insisted the child was in this area of the city. How they knew that he didn’t know, but orders were orders.

“How the fuck do these guys know that kid’s in this part of town?” Goose had been vocal about his protests from the get-go. All of it because of the micromanaging. “We’ve searched high and low. The kid ain’t here.”

“It’s not like we’ve got anything else to do. We’re gettin’ paid by the hour. They want us to look here, we look here.” Shadow was the newest patched member of Bones and probably the most levelheaded and calm person Arkham knew. “We just flex some muscle if we see anything suspicious and be ready to bean someone if they need it.”

“Yeah. Way wide latitude,” Arkham grumbled. “I don’t like this.”

“Cain knows these guys personally,” Torpedo said. “If he says go, we go. We follow orders.”

“Ain’t never been good at following orders.” The back of Arkham’s neck was tingling like a son of a bitch. Never a good sign. “’Specially not from no pretty-boy, badass wannabe.”

“My understanding,” Torpedo explained, “is that these guys are the real deal. Seems Cain served briefly with Azriel Ivanovich. He’s part owner of Argent Tech.”

“The company that makes all those pretty gadgets Data is always forcing us to use? I hate the bastard already.” Arkham wasn’t opposed to technology per se, he just hated being forced into it. “Most of that shit is just used to dumb down the real work. I mean, I can fuckin’ shoot straight and follow a compass. And I don’t need a fuckin’ leash shoved up my ass in the form of one of those fancy GPS things he hardwired into our radios and phones. Hell, even our fuckin’ bikes are tracked. Where’s the end?”

“You’ll have to take that up with Data and Cain.” Torpedo shrugged, his body posture letting Arkham know Torpedo was just as vigilant as he was, even while carrying on the conversation. “I just make sure you use it.”

“Next thing you know he’ll be wantin’ to tag us with some kind of chip under our skin.”

Arkham stopped dead in his tracks. “I will bust a motherfucker up.”

Though he continued the disgruntled conversation, Arkham was only half paying attention to his brothers. Their actual mission was extremely vague. All they seemed to do was patrol the poorest section of the city and give people mean looks. They’d questioned every single person they saw, but no one had seen the boy. Arkham had no idea if he believed any of them or not.

The streets were mostly dark at night. Though the streetlights were replaced almost daily, by the end of the day they’d all be broken out again. Drug deals routinely went down in rundown buildings in the process of being renovated, though the team from ExFil had stopped some of it during their search. Drug sales continued regardless. Arkham thought Bones more suited to this than ExFil, but their employer had insisted on the paramilitary version. While Bones was the rough and ready MC, ExFil was the more disciplined and civilian accepted military-like organization run by Cain. This city needed the military, not the outlaws. Conditions had seemed to improve somewhat, but there was still a long way to go. Oh, well. Not his turf. Not his problem.

“How the fuck did a place like Argent Tech end up in this shit hole? It’s no bigger than Somerset and has way less to offer. Not to mention at least a third of the city is nothing more than slums. These people certainly don’t benefit from the tech giant.” Shadow had that part right.

“I agree, brother,” Arkham said. “Not sure what our goal here is, but it seems like more of a policing effort than searching for a missing kid. I’m ready to tell ‘em all to shove it up their ass.”

“The point is for us to give Ivanovich and his associates the help they need in locatin’ a missin’ child. And they are tryin’ to better the place.”

“You’re just trying to defend Cain’s decision to take this job, Torpedo,” Arkham groused. “You don’t like it any more than we do. If they’d let us do this our way, we might have found the kid already. That’s what’s pissin’ me off.”

“Ain’t sayin’ you’re right. Ain’t sayin’ you’re wrong. But if you don’t shut the fuck up about it, I will turn Suzie on your ass so quick it will make your head spin. Stunner might have let her use most of the red and green glitter on him, but I know where there’s a whole fuckin’ tub of pink glitter, and I’ll point her in the right direction.”

That got a laugh from everyone. Evan Arkham snorted. “Harsh, brother,” he grumbled.

They passed the next hour in silence. Still, that tingle between Arkham’s shoulder blades persisted. They were being watched. Had been since they’d gotten off the Goddamned plane. “When I find that son of a bitch, Imma throw him a beatin’.”

“What the fuck are you talkin’ about?” Goose had turned and was facing away from them now, guarding their six as they slowed their trek down the sidewalk.

“Someone’s been watchin’ us since the second we got off the fuckin’ plane.” Arkham tried to watch his area, but he knew the threat was from above. Now that he’d mentioned it, he gave up all pretense of pretending not to be actively seeking their stalker. He raised his gun to the rooftops, putting his infrared goggles in place. Everyone followed his lead.

“I thought I was just being paranoid,” Goose muttered.

“No.” Arkham had learned long ago to listen when that sensation was trying to tell him something.

Just as they rounded the corner, Arkham spotted him. “Got the bastard,” he muttered. “Two o’clock, theater roof. He’s got a rifle scope, but I can’t confirm a weapon.”

“Copy that,” Torpedo said. “Shadow, you and Arkham fall back. See if you can go up the back way and get him from behind. We’ll patrol the alley to the west. If he follows us, should be easy pickin’s for you guys.”

“Radios on,” Arkham ordered. “I’m not losing anyone to a rookie mistake.”

“Got it,” Shadow and Goose confirmed on top of each other.

“Up the east side. And don’t kill him unless he deserves it.”

“He already deserves it for giving me a headache, “Arkham said, readying his rifle.

“Bastard has it coming.” Torpedo didn’t argue. Arkham was a hard ass, but he wouldn’t make a kill unless it was warranted. They all knew it and didn’t insult him by suggesting otherwise.

Shadow was the best partner he could have for a situation like this. The man’s special talent was disappearing into the shadows. Hence his name. Arkham was good, but he let Shadow take the lead on this one. If Arkham was spotted, Shadow would already be in position to defend him. It hurt to admit the big man was better than Arkham at anything, but truth hurts sometimes. Only meant Arkham would be working on that particular skill set even harder.

It took them seven minutes to gain the roof and another one to lay eyes on the target. He was slender, small. A boy? Arkham stayed put for several minutes. Shadow followed his lead, not breaking cover before Arkham gave the word.

The kid followed the perimeter of the roof, never taking his eyes from the team below. If he knew they were light two men, the kid didn’t seem overly concerned. He stopped right next to Arkham. He could have reached out and touched the boy. Two more steps, and he’d run into Arkham. Instead, he stopped, never taking his eye from the scope.

“You’re all clear,” the kid said. “They’ve made a circle around the theater. All four of them. If you’re going to take them, now’s the time.”

Three things registered for Arkham. First, his team was about to be ambushed by an unknown number of hostiles. Second, the kid wasn’t a boy. It was a girl. Third, she was deliberately deceiving whomever she was talking to.