My very first two scifi romance series are now available as a re-release. Get the Vaaden Captives and Vaaden Warriors novellas in two boxed sets from Changeling Press. Keep scrolling for a sneak peek!

These titles are also available for preorder at retailers (without the discount) to release on January 17th. Retailer links for each can be found on the Changeling Press page. 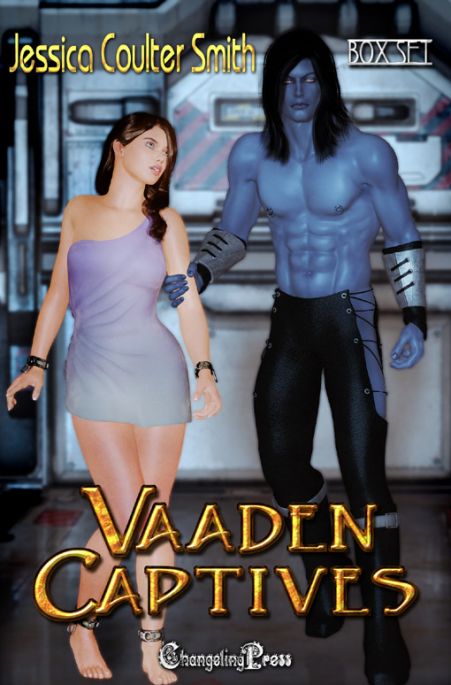 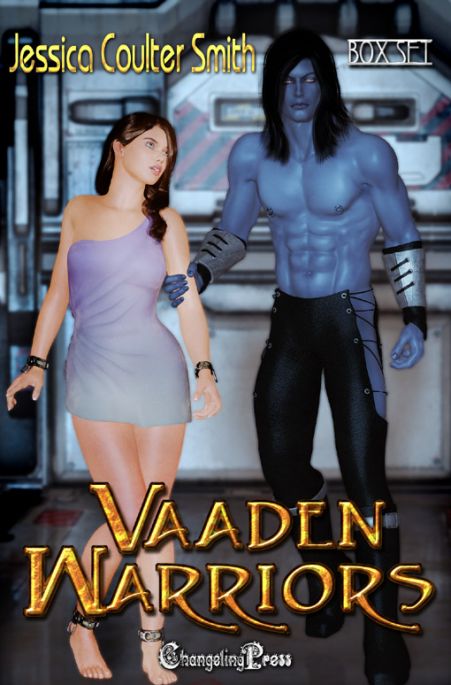 Captured on Earth, Sorcha, Enid and Susan are taken to a planet in another galaxy for the sole purpose of pleasing the Vaaden warriors. The women are unsure of their future and fearful of what’s to come. Slaves, bound to owners who crave them for the pleasure they can bring, the women despair of ever finding happiness again. But then the unthinkable happens. Sorcha falls for her owner’s brother; Enid, despite her fears, falls for the man who claims her; Susan finds herself drawn to two men, but in the end, only one will claim her heart.

A planet dominated by men, men ruled by their lust, Vaaden is harsh and unyielding toward women. When three Vaaden warriors claim slaves procured from Earth, they will face emotions they never knew they possessed. Rheul doesn’t believe in love, until he meets his new slave; Randar must choose between his duty or his heart; Thale thought he was saving Moira, but in the end she saved him.

“The collection of stories in this book are intriguing in a lot of ways. I enjoyed reading about the world the author created… I do want to find out more about Vaaden society and what changes may be in the future based on the special permission given to the three warriors. I am looking forward to the next book.”

Bastian entered the room with a petite woman with long, wavy black hair that hung down her back to her waist. She was even shorter than Enid, if that were possible, and I felt the sudden urge to protect her. Foreboding filled me, and I realized these feelings weren’t good. I hadn’t even been introduced the woman yet, and I already wanted to protect her? What would be next?

I moved to stand before her. I looked down into her upturned face; guileless blue eyes stared up at me. Her porcelain skin looked petal soft, and I wanted to touch it, to see if it felt as silky smooth as it looked. Clenching my fists, I fought the urge to sweep her into my arms and hold her close, to breathe her in.

“What’s your name?” I asked her gruffly.

“I was told I am to be your slave,” she answered softly, her voice wrapping around me like warm silk.

Damn. I was in serious trouble. Only in her presence a matter of minutes, and I already wanted to sink to my knees and bury my face against her, inhaling the scent I imagined would be uniquely hers. I wasn’t sure what the hell was wrong with me, but I needed to fix it and quick.

My expression must have given something away because Bastian smirked at me and Enid had a knowing look in her eye. I cleared my throat and reached for Darcy. “It’s time I took you home and got you settled.”

“Rheul, would you mind if I visited her?” Enid asked.

Bastian growled. “Forget Rheul. I don’t want you visiting. You’re not to go to the slave quarters!”

Enid rolled her eyes and sighed, patting her pregnant belly. “Honestly, Bastian. It isn’t like I haven’t seen them before. In case you’ve forgotten, I did live there for a while.”

“Things are different now,” he said, putting an arm around her.

She smiled up at him and for one moment, I envied them. I knew I’d never experience that with a Vaaden woman, but one day I would be required to marry, especially now that Bastian wouldn’t. While Enid might have special permissions not allowed to most slaves, she was still a slave. She and Bastian could never marry, no matter how much they might want to.

Clearing my throat, I took Darcy by the arm and led her to the front of the house, and called over my shoulder, “I’ll see you later.” Once we were outside, I led her toward the slave buildings. “Time to take you home.”

Darcy looked up at me. “How is it that I can understand everything you say even outside of a home? While I was confined, I noticed the translation boxes in the cells, and I saw one inside the house.”

I flipped up the collar of my shirt, showing her a small silver circle. “This translates up to five hundred languages, automatically selecting the ones being spoken.” I smiled down at her. “Since I designed it, I figured I should be the first to test it.”

She looked impressed, and I felt proud of my accomplishment, which made no sense. What did I care what a slave thought? Her opinion didn’t matter. “Is that where we’re going?” she asked, pointing to the tall windowless building ahead of us.

“Yes. Your… I believe you would call it an apartment, is in that building.”

“Mine? You will not stay there?”

“No.” She looked up at me a moment longer, but didn’t say a word. When we reached the building, she looked at her surroundings, but I couldn’t tell anything by her expression. If she was shocked or appalled, she didn’t show it.

When we reached the fourth floor, I opened her apartment door and ushered her inside. Even though I’d had the inside re-done for Enid when she’d stayed with me briefly, during a time when Bastian had clearly lost his mind, I’d made it over again for Darcy. Enid hadn’t used it, but it still seemed like the right thing to do.

She studied everything silently, her fingers trailing over the soft comforter. “What’s behind that door?” she asked, pointing to the silver panel on the opposite wall.

I pressed my hand against the surface, and the door opened with a whoosh, disappearing into the wall. The interior was the same marble from top to bottom as the flooring in the living room, except it was a pale gray.

She eyed the shower in curiosity. “How does it work?” she asked softly.

I pressed a silver button on the wall, and water cascaded from the top, creating a waterfall of sorts. The shower was a little different from most. I’d had it designed special, wanting something unique. I showed her how to work the soap dispenser and the sink before turning off the shower.

She hesitated before leaving the bathroom. “May I… may I take a shower now?”

I studied her more carefully and realized her slave garment was dirty. It angered me that they hadn’t taken proper care of her, but again my reaction made no sense. The slaves were never treated well before they were claimed, so why would mine have been treated differently? She’d turned my world upside down, and I didn’t like it.

“Let me find you something clean to wear.”

I walked over to the closet and opened the door the same way as the bathroom. Anticipating her arrival, I’d purchased several tunics for her, slightly longer than the slave garment she had on, but nothing like the dresses Vaaden women wore. I selected a soft blue, pulled it out of the closet and took it to her.

When I handed it to her, tears gathered in her eyes, making me feel slightly uncomfortable. “You don’t like it?”

“It isn’t that,” she said quietly. “I just didn’t expect… I’d heard… A few of the women in the cell spoke of what happened when Vaadens claimed slaves.”

“And how did they know what happened?”

“They’d been claimed and returned.” She looked down at her hands. “One of them had been abused by her owner.”

I frowned. That was highly unusual. Typically, if a Vaaden didn’t want his slave, he gave her away, or killed her. In some instances, she would be turned over to the harems. Was there a new policy in place I knew nothing about?

“I’ve never heard of that being done before. Are you sure that’s what happened?”

“That’s what they claimed.”

“Did they explain what Vaaden men expect of their slaves?”

She blushed and looked away. “You want me to sleep with you.”

I gently reached out and grasped her chin, turning her to face me. She wouldn’t meet my gaze at first, but finally her eyes met mine. I didn’t see fear, but I did see uncertainty. “I promise I won’t hurt you.”

Harley Wylde is the “wilder” side of award-winning author Jessica Coulter Smith. You can find Harley online at harleywylde.com. Jessica also writes gay romance under the pen name Dulce Dennison.

**For a limited time, you can borrow Brielle and the Alien Geek through Kindle Unlimited, or purchase for only $0.99! This title will be leaving Kindle Unlimited very soon.