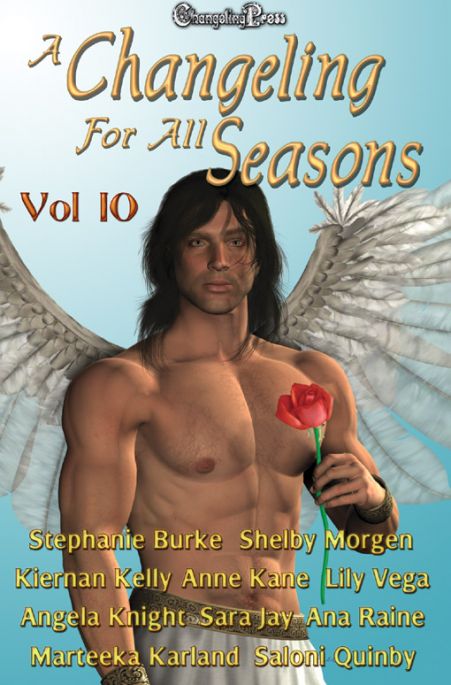 Ten tales of Christmas Magic from your favorite Changeling authors.

Oops! by Anne Kane: When Stephanie, Jackie and Caroline kidnapped the wrong man, bondage, obedience classes and more are needed to make sure there’s a Merry Christmas this year!

Gift of a Lifetime by Ana Raine: More than just a handsome face, Logan proves to be exactly the Master Ryo has been waiting for…

Santa’s Reject by Lily Vega: A scratch from Cupid’s arrow infuses Beryl with Christmas spirit and saddles her with a mad crush on her new boss, Killian — a.k.a. the Tooth Fairy.

Candy Caned by Kiernan Kelly: Stephen, a Dom who knows Daniel better than anyone else, understands exactly what Daniel needs this Christmas.

Ribbons and Bows by Marteeka Karland: It may take more than ribbons and bows to tie his woman to his side, but Samson’s up for the challenge. The rest? That’s up to Jerrica.

Under the Mistletoe by Saloni Quinby: Only by working together can Leland and Vilek hope to survive Christmas Eve and find a love neither expected.

Visions of Sugarplums by Sara Jay: Will Heath take a chance once Sugarplum brings him a pretty Christmas present he can’t resist?

Christmas Party by Shelby Morgen: When the two IT people voted least likely to ever get a date collide at Cherie’s office Christmas party, is the chemistry they share enough to make up for all the reasons they’ve been determined to stay single?

Santa’s Slay by Stephanie Burke: Jack Frost does not nip… he bites — and bites hard. Peter’s learning that being naughty can be so nice.

Get it Today at Changeling Press
also available in print

Pre-Order for December 6th at retailers

Praise for Gift of a Lifetime (Yule Tied)

“If you like stories with a touch of holiday spirit, if you want to watch two men with opposite and complementary desires find each other’s match, and if you’re looking for a read that is very hot almost from the start, then you might like this short story.”

“There were so many creative touches in this tale. Everything from the names of certain characters to the economic value of the teeth that Killian collected had clearly been thought out carefully. I grinned every time the protagonist drew my attention to yet another funny pop culture reference that had been tucked away in a description or conversation These little surprises made it so much fun to read.”

— Astilbe, Long and Short Reviews
Praise for Under the Mistletoe (Yule Tied)

“A paranormal Christmas story! Just recently I was commenting that they are so rare, so it was great to come across another one so soon. And with a mix of supernatural creatures, some evil demons intent to do harm, and lots of danger this is quite the holiday adventure.”