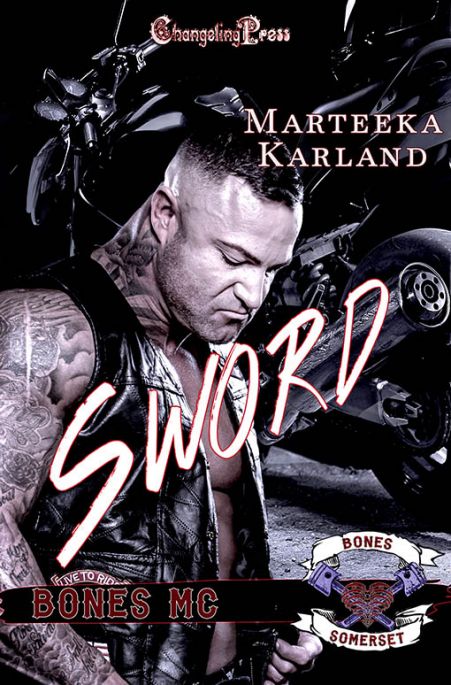 Magenta: The day my mom took up with Black Reign was the worst day of my life. She became ol’ lady for their president. I became another whore for the club to push around. I fought them at every turn because death was preferable to living this life. Beaten, downtrodden, I was about to be given to yet another man. The scariest man I’d ever seen. He was intent on having me on his own turf, and I wasn’t sure I would survive.

Sword: The second I saw the slight young thing being beaten by that ogre of a man, something inside me I’d thought leashed broke free. A demon better left in check reared his head, and I knew she would be mine no matter what. I got her, but she came with bigger problems than I was prepared to deal with. Not that it mattered. I’m Bones MC. We don’t give up, and we protect our own. Even against The Devil himself…

***WARNING!*** Bones MC has no pussies. These men are rough around the edges and fight as hard as they love. You can expect violence — some that may have triggers — and smoking hot sex. If either is something you object to, you should pass. Otherwise, expect an HEA and a man who always satisfies his woman.

“This is a bad, fucked-up place if ever I saw one.” Sword glanced at Torpedo, his brother in the Bones MC. They’d made the typically thirteen-hour trip to Lake Worth, Florida in just under twelve hours, riding non-stop as fast as they dared. Cain had sent a group of them to contact a club known as Black Reign. If their information could be believed, Black Reign was moving pills up the “Oxy Highway” from Florida to Kentucky. Cain couldn’t care less what they sold or how they sold it, but he would not tolerate another club moving shit through their territory without the OK from Bones.

Now, he lay on his belly watching the dingy brown clubhouse in the middle of a seaside urban sprawl.

“Yeah,” Torpedo, their vice-president, agreed. He had squatted down just behind Sword but still low to the ground. “I got a real bad feelin’ about this.”

Sword glanced at the other four men with him. Viper, situated in a similar position next to Torpedo, looked coiled with tension, ready to strike at the slightest provocation. Didn’t mean anything, though. The man always looked that way. Trucker was impassive as ever, farther behind them and slightly to the left so he was hidden in the foliage but still able to see their target. He polished a huge wrench with a black rag as if he planned on working on one of their vehicles. The man always carried a gun, but Sword had never seen him use it outside their work with ExFil, a paramilitary mercenary company for hire to anyone wishing extra protection in the most violent areas of the world. He had seen Trucker open a can of whoop-ass more than once with that exact same wrench. Arkham and Torpedo each checked various weapons on their person, readying for what was to come.

Torpedo was the vice-president of the club and would do the talking. Cain had originally intended on coming himself, but Torpedo, Sword, and Bohannon had all three protested vehemently. Cain, ever the ultra-alpha, had gone nose to nose with the trio, and they might have come to blows except for one minor incident.

Angel, Cain’s woman, had put a restraining arm on her man and pulled him away from his brothers. Though Cain routinely gave the woman anything and everything she wanted, he’d looked at her, a warning in his eyes for her not to go against him in front of his brothers.

“I know you need to do this, Cain,” she’d said. At the time Sword thought she was ignoring Cain’s warning. Instead, she’d had a very good reason. “But I need you more than the club needs you to go to Florida and confront these men.” She’d said it softly, and there had been a sheen of tears in her eyes. Sword knew it was an intensely personal moment, but she’d brought it up in front of them. Now, they’d know what the problem was, and they’d all crush it for her.

Cain had known it, too. Any problem his woman had from the outside world, the club would know about it. They’d all band together and make it right, no matter the cost. “I can’t let you tell me in private, Angel. Not now that you’ve brought it up in front of the club during club business. You shouldn’t even be here.” The president had been angry she’d snuck in. They could all tell from the look on her face, though, she had a good reason.

“Cain, I’m pregnant.” There had been instant silence in the room. Cain had sucked in a short inhalation of air before grasping her by the shoulders. “Don’t be mad because you think I was holding something back from you. I just found out today.”

It turned out that Angel had gone to the doctor because she’d been weak and very sick over the last few weeks. Nothing abnormal for a pregnancy there. However, she’d hidden most of the sickness from everyone, and she’d reached a point where she was very dehydrated and, once her doctor figured out she was pregnant, he’d wanted her to be admitted for IV fluids and medication for nausea. She’d initially refused, not wanting to alarm Cain, but the oral meds the doctor had given Angel weren’t working. She was unable to keep anything down and was afraid she’d harm the baby if she didn’t go to the hospital like her doctor recommended. She was terrified of losing the baby and needed Cain at her side.

Bohannon, the club’s main enforcer, had jumped all over that shit. “You can’t leave her, Cain. You’re not the kind of man to leave his woman to deal with this alone.”

Cain had given the big man a withering look, but had readily agreed. He’d pulled Angel into his arms while the woman finally gave in to what had to be a horrible bout of nerves. She’d clung to Cain and silently sobbed into his shirt. They couldn’t hear her, but the shaking of her slight body gave her away.

Naturally, Bohannon, as the main enforcer for Bones, had thought he’d go. If they were going to warn an MC out of their territory, they needed all the muscle they could get.

“You know that shit ain’t happening.” Torpedo had stood from his seat at the table where they’d gathered to hash out what to do in this situation. It was something they always did. Whether it was Bones or in preparing for a mission with ExFil, they talked through the problem and built a plan of attack together with Cain having the last say.

“As vice-president, I have to be there, especially since Cain has more pressing problems.” He looked at Angel then, his eyes softening for the first time. “You make him take care of you and the little man who’ll be the newest member of Bones,” he’d said, serenity in his gaze and his voice. “With Cain focused on Angel, the club will need you here, Bohannon. You’re third in the chain of command. Sword will come with me as enforcer. Trucker, as always, will provide the chase vehicle with the weapons. Viper and Arkham will be the muscle. Data can keep track of us and run communications from his command center here. If anything goes wrong, you can send whoever you see fit after us.”

“It’s thirteen fuckin’ hours away, Torpedo! Any help I could bring would be hopelessly too late.”

“Then we’ll just have to make sure we don’t need you. Besides, Salvation’s Bane is less than half an hour away in Palm Beach. Thorn can send any help we need.”

Luna, Bohannon’s woman, curled her small hands around the enforcer’s biceps. “They’ll be fine, Bohannon. Let them do their jobs.”

“Does every woman in this fuckin’ place think she can take over the fuckin’ show?” Bohannon grumbled, but his large hand enveloped his woman’s smaller one in a loving gesture even as he groused.

“Only when the testosterone overflows. It reduces you to cavemen, and we can’t have that.”

Everyone chuckled, and the tension level dropped. Sword had never seen a club where the patched members let women in on meetings, but the women of Bones didn’t seem to care for conventionality. They simply slipped in when they knew they were needed and directed the flow of churning water in the direction it flowed best. None of them had been with their men long, but Sword could already see the positive impact they were having. Simply keeping a group of alpha males like this one focused on the problem at hand without unnecessarily risking themselves wasn’t an easy job, yet these two small women handled it like pros.

Now, as he lay on his belly watching the abandoned warehouse that served as clubhouse for Black Reign, Sword got the sickening feeling his team was undermanned. If they continued with the meeting as planned, they’d be walking into more muscle than they were prepared for.

“You gonna call in reinforcements?” Trucker’s question was soft and nonchalant, as if the man could care less. It was a simple enough question. The fact Trucker asked it, however, showed he was thinking along the same line Sword was. Which meant that…

“Get Data to give the heads up to Thorn. He’ll get Salvation’s Bane ready in case we need them.”

“Already on that, bro.” He held up his cell phone. “All you gotta do is say the word. Thorn is less than five minutes away parked and waiting. Apparently, Bohannon jumped the gun and had them on stand-by over an hour ago. Surely to hell and God above we can last five minutes.”

“Be embarrassing otherwise,” Arkham chimed in. Though Sword was looking at the clubhouse through field glasses, Arkham and Viper were tracking the place with sniper rifles.

“Not sure I’ve ever met anyone as bloodthirsty as you and Viper.” Torpedo was only half joking.

“We got movement.” Sword stiffened as he watched as a big, burly man dragged in a woman by her hair. She screamed, clutching her hair to relieve the tension the big man had put on her scalp. The woman tried to back off, planting her feet, but the concrete was slick and unforgiving. She ended up on the ground, the man still dragging her by an abundance of hair. Two more women followed on their own. The latter chatted with each other, ignoring the drama in front of them. When the women passed the struggling couple, disappearing into the clubhouse, the hulking man pulled the woman to her feet and backhanded her across the face so hard she crumpled at his feet.

Sword’s entire being shrieked in outrage. He couldn’t see her face, but her legs and arms were firm and sleek with fine muscle, a testament of her youth. He thought she was an adult, but probably quite young. Protective instincts rose in him like never before, and it was all he could do to keep himself from charging to her rescue.

“Easy there, brother,” Torpedo said, laying a restraining hand on his shoulder. “You know that girl?”

Had he said something out loud? “No.”

“You’re growling and tense like you intend to do some damage.”