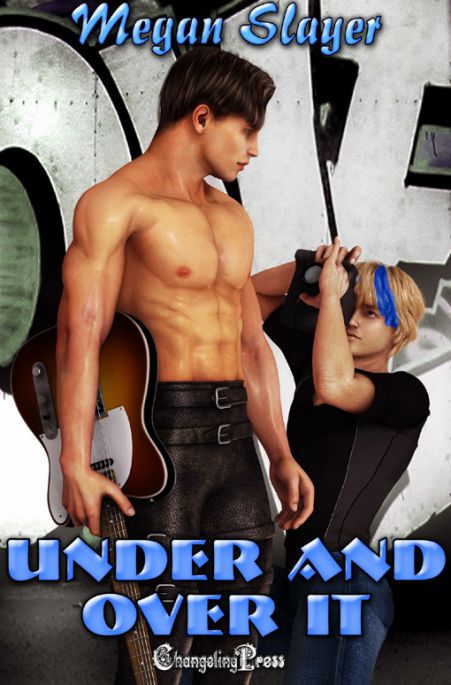 Regan Finley’s photography makes the local music scene shine. He’s four months from his final exhibition and graduation. But instead of preparing for the party, he’s fretting about his exhibition theme — bondage and passion. There’s one person he wants to make his exhibition come to life, if he can convince his housemate to participate.

Camryn Tate plays the music that makes the young girls scream. He likes being a local rock hero. When he finds out what Regan wants for the exhibition, Cam has to make a decision. He can let Regan have his commanding way and get the pictures he needs for the exhibition, or he can walk away from the best roommate and friend he’s ever known… all because of a little ball of nylon rope.

or pre-order for November 8th at retailers

“Have you come up with a theme for your final project?”

Regan jerked his attention to the sound of Camryn’s voice. “Excuse me?” They’d been housemates for almost six months and known each other for a year beyond that, but this was the first time Camryn had shown real interest in Regan’s artwork.

“I’ll use English.” Cam crooked one brow. “The big theatre show or whatever you all call it is in less than a month and half. What’s your theme or idea or the art term for project thingy?”

“It’s an exhibition at the Kline Gallery and yes, I’ve got a theme picked out. The title is still up in the air.” Regan held his breath for a beat. “Right now I’m going with Confined Obsession.” Well, that was part of the title, anyway.

Regan stared at Camryn with no idea what Camryn was thinking as he stared back with his drop-dead gorgeous green eyes. Regan stifled a groan. The guy could model professionally. Cam spent just enough time at the gym to be sculpted without getting too veiny, and he was one of those rare creatures who didn’t have a ton of body hair all over the place. Regan swore Camryn Tate was made for photography.

Too bad Cam never bothered to volunteer to be Regan’s model.

Instead of speaking, Camryn nibbled on the corner of his mouth, no doubt deep in thought. The longer he stayed silent, the more Regan’s skin crawled. He wasn’t totally sold on the project theme, but he didn’t have much choice. “Confine” sounded so harsh… he wanted something equally emotional, but better said.

“How do you suppose you’re going to show this confinement? I mean, it sounds like you’re talking about someone being in jail.” Camryn strummed his guitar, his fingers gliding over the strings to create a melody Regan had never heard before.

“That makes more sense.” Cam closed his eyes and nodded in slow motion, caught up in his new composition. “Did you have to submit a timeline or anything? I’ve got exactly five weeks to get the bones of my music comp project done. I’m stumped. I thought maybe if you had a plan, your hyper plotting would rub off on me. It worked at mid-terms.”

“Plotting?” Regan snickered. Here he’d thought no one recognized his latent OCD tendencies. Cam got him, as always. Regan stared at the computer screen. He felt a little better about his unspoken choice for the show. “Well, the plan was to show people in the midst of everyday activities but with the confinements and constraints put upon them by society. You know, like Cassidy and her son… Skylar with his suit and tie.” Me and my sexuality with a roommate who doesn’t know I want him for more than platonic reasons.

Yeah, there was no way in hell he’d throw that in. Camryn knew Regan was gay. Regan didn’t exactly keep his taste for men hidden. But Regan wasn’t interested in showing himself in the photographs — he’d worked too damn hard in the space of four years obtaining his photography degree to do a series of self-portraits. Besides, his internship at Rock Monthly wasn’t going to up and disappear because of his sexuality. Max and Skylar loved Regan’s take on capturing the musical community in photographic form. But the friendship with Cam might crumble if love were injected into the scene.

“Who’s going to be in the pictures? Sarah? Skylar? Cassidy might do it. Why don’t you ask Marcie — she’s hot for you.”

“They might do it, yes.” Not quite the way Regan had planned, but they might get involved. “I kinda had an idea who I wanted for the model, but Marcie isn’t on the list. She’s in love with you.”

“Yeah?” Camryn looked up from his guitar, still riffing the bouncy tune. “Well, I am hot, but she’s not my type. Too thin.” He bobbed his brows in time with the music. “Aren’t I so full of shit? Now for the model. Anyone I know?”

“Your ego certainly is intact.” Regan gathered his wits. If he didn’t just say what he wanted, the moment would pass. He swallowed hard. “You — I want you for the model.”

How wasn’t that a whisper? Shit. The declaration in the mirror had come out so much stronger when he’d practiced earlier that morning.

The strumming stopped, and the color bled from Cam’s face. His eyes widened, making Regan’s pulse skip about five beats. “You want me? I don’t know what to say.” He placed his hand on his heart in a dramatic fashion. “It’s all so sudden. I don’t have a speech planned.”

“Drama king.” Regan rolled his eyes. Hell, yes, he wanted Camryn, and not just for photographic purposes. When Camryn looked at Regan, his knees turned to jelly. He wanted those eyes fixated on him as he did devious things to Cam. Looking lovingly down at Regan while Cam swallowed him to the… oh, God. Regan needed to get out and get laid. He’d known lots of guys, both gay and straight, and as far as he knew, Cam wasn’t gay — just theatrical.

“Can I keep the guitar?”

Guitar? Regan forced himself to surface from the Cam-induced haze. “Sure.” For a while, anyway. What Regan had in mind didn’t include the instrument, but keeping it with Camryn had merit. “Actually, yeah, I do want you to have the guitar. I’ve got an amendment to my idea, and you playing will work perfectly. When’s your next gig?”

“Tomorrow night at the Barricade. I’m sitting in with the Taylor Rogers Band for the May Day Festival. Tony’s sick.”

“Score one for you.” The stage at the Barricade had the best lighting for photography. Reds, greens and blues all shimmering off the singer and players. Yes, that would be great. “I’ll be there.”

“You know, I’m excited. You never come see me play.” Camryn strummed the guitar once again. A smile built on the corner of his mouth. “I like it, so don’t wuss out.” Cam toyed with the tuning pegs. “And I know you’re going to get a huge head, but I’m kinda looking forward to being in your pictures. The folks in the music building think you’re the bomb.”

Regan sighed. He wanted to tell Cam not to fuck around with compliments, especially with the music people. At twenty-six, he was too damned old for empty flattery. Sure, Regan loved doing the photos — capturing the heat of the performance was what he lived for. But damn, he hated being on the hair trigger. Four months without even so much as a date sucked balls. Regan scooted back into the safety of the couch. If he kept his mouth shut, Camryn would never know how much Regan wanted him for more than a good headshot.

Camryn stood and stretched. “I’m cashing in. Tomorrow will be late enough. May Day is a blast but man, the night is long, and I want to look good in those pics.” He placed the guitar in its stand and raked his fingers through his hair, making it stand up in messy spikes. “Sleep and composition class tomorrow.” He crossed the room in three long strides and stopped in the doorway. “Have you — have you ever had a burst of creativity right when you really needed to crash?”

“That’s why I pull the all-nighters. Not because I have to turn the project in the next day. It’s the flow, the zone. Can’t knock it when it shows up.” Cam nodded, and a lock of his ebony hair slid over his forehead. “Yeah.” The smile grew. “Night.”

Once Camryn left the room, Regan covered his face in his hands. Creativity had walked in the door the moment he met Camryn down at the commissary. He probably wouldn’t have paid attention, but Camryn sat on the steps and sang that Queen song so loud, Regan couldn’t help but notice. Cam knew all the words, even when Freddie Mercury and the bass line garbled it. He didn’t shy away when Regan sat down, instead making room for him on the concrete step.

Regan sighed. The moment Cam stopped playing and smiled, he’d fallen head over heels. And Cam had no idea.

Megan can be found at https://www.facebook.com/theauthormeganslayer.