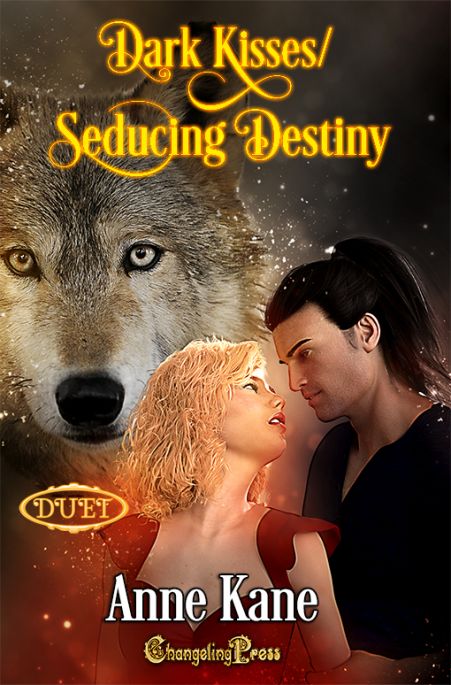 Seducing Destiny: Jack, the alpha of the North Rockies pack, knows Destiny needs some time to come to grips with her werewolf heritage before he springs the whole mated for life thing on her, but when a band of rogue werewolves move into the area, Jack can’t afford to have his attention divided. It’s time to convince Destiny she belongs in his pack — and in his bed.

Dark Kisses: Kidnapped and dumped in unfamiliar territory, Katie has no idea where she is or why the geriatric old fool chose the Northern Rockies Pack territory to dump her, bound hand and foot. The fact that she’s just come into heat doesn’t help matters either. When Jeff finds her, his mere presence sends flames of liquid lust sizzling through her veins. Can she resist the dark wolf, or will she succumb to his wildly sexy dark kisses?

Praise for Seducing Destiny “I liked this story a lot…very hot!”

“I loved how chocolate plays into this storyline. Ms. Kane leaves no doubt in the reader’s mind that sex and chocolate are the perfect combination.”

Destiny stared in dismay at the box in the middle of her kitchen table. Her stomach lurched, a ball of anxiety settling in the very middle of it. Gold gilt covered the small box, giving it an exotic look. An artfully tied crimson bow surrounded by curls of white lace sat cheerfully atop it, adding to the air of decadent luxury.

She knew who’d put it there, and she knew why. Jack. The Alpha of the Northern Rockies werewolf pack. The man who made her knees feel weak whenever she glimpsed him walking down the main street, or lounging at a local coffee shop. The man who’d made it plain that he intended to be her mate. The absolute last man on the face of the planet that she intended to get serious about.

No point in putting this off. Her sensitive nose could smell Jack all over the damn box. She caught the trailing lace between a thumb and forefinger and gently undid the bow, dropping the cheerful piece of ribbon on the table. Taking a deep breath, she plucked the lid off.

Her breath caught in her throat. An exquisitely detailed chocolate wolf nestled in a cushion of crushed white velvet. Every detail from the tip of its muzzle to the dominant curve of its tail was perfect. Jack had reproduced himself exactly. She knew if she turned the little wolf over, she’d find a jagged scar running along its left flank.

“I suppose I could always bite your head off.” Destiny felt a wry smile tug the sides of her mouth. She jumped, startled by the sound of a loud knock on her front door. Quentin must have gotten out of court early. She hadn’t expected him to show up for at least another four hours. Sweeping the ribbon up off the table, she stuffed the box and ribbon into a drawer and slammed it shut.

“Come on in, the door’s open.” She hoped Quentin couldn’t hear the guilt in her voice. Not that she had anything to feel guilty about. Damn Jack and his fancy little chocolate creatures! She smoothed her hands down her skirt and tried to look calm.

“I know, I was just being polite.” Jack strode into the room, a crooked smile on his rugged face. “You’re not usually this happy to see me.”

“I thought you were my boyfriend.” She looked pointedly behind him as if she expected Quentin to materialize any second. “I’m expecting him to drop in after court today.”

Jack ignored her reference to Quentin and gave her a toothy grin. “I intend to be a lot more than a friend, and it’s been a long time since anyone referred to me as a boy.” He advanced, his eyes sparkling. “Glad to hear you finally think of me that way, though, because unless my nose is deceiving me, you’re going to be begging for my attention shortly.”

Destiny felt a surge of color flood her cheeks and she turned away so he couldn’t see her face. It mortified her to know he could smell her eagerness. “You wish.” Now that was lame!

He took her by the shoulders and turned her around to face him, his touch surprisingly gentle for such a large man. “No, I know. The full moon is on Saturday. You haven’t slept with that wimpy boyfriend of yours, and you’re not going to if you want him to live to see Monday. A human male can’t begin to satisfy your needs. I wouldn’t have to lift a paw; you’d tear him apart yourself. Your frustration level is about to escalate to hellish proportions.” A devilishly wicked smile curved the corner of his mouth. “Fortunately, I can help you deal with that.”

More from Anne at Changeling Press …