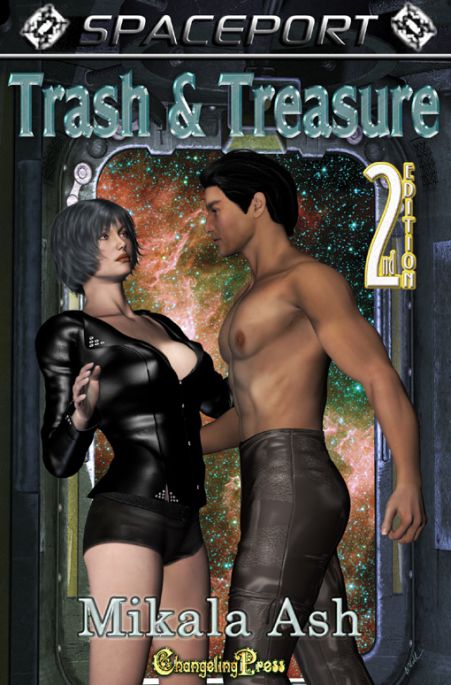 Award-winning reporter for the Adana Observer Holly Barberossa finds herself once again in her natural environment: hot water.

Antagonizing the Dollavera “brothers,” a family of clones who run the Amalgamated Spaceport Guild of Scavengers, with a series of damaging exposés was bound to drop her into a cauldron of trouble but when a dismembered body, an abused robot and a scared alien entity are thrown into the mix then Holly is really in the soup.

But she can’t forget a story, that’s her problem, and her greatest strength. Will Maxim’s brothers allow Holly to walk all over them in the media without retribution? Will Maxim welcome her into his world when she is trying to destroy his brothers? And just who are the bad guys, really?

“I loved the futuristic and paranormal backdrop to this tale, which added to the fascination of the plot. I look forward to reading the other stories from a variety of different authors of the Spaceport series.”

“The addition of a good mystery and intrigue to the plot make Spaceport: Trash & Treasure a fine addition to the Spaceport series.”

I need a beer.

With an emphatic click, Holly Barberossa snapped off her smartcam while K. Dollavera was still flapping his jaws, the bombastic Guild executive ever eager to have the last word. Asshole!

It had been a helluva day. She’d lost her cool and she knew it. Vinnie would gripe about it in the morning, give her the old lecture about getting more with sugar than… hell, she couldn’t remember how that homily ended even though she’d heard it a thousand times.

I need a beer.

The Haze was only ten minutes away. She could almost taste the amber fluid, not to mention the plate of ribs she’d have to go along with it. The image of her favorite meal, dripping with that mouth watering Altaran sauce the cook at the Haze used, filled her mind and worked its magic on her salivary glands. Her empty stomach gave a sustained and hopeful cheer.

She hadn’t stopped for lunch, running from one end of Adana to the other; interviewing idiots and assholes, fending off the groping hands of hopeful pedestrians trying to cop a feel, being kidnapped and fucking led around blindfolded by amateurs on the run (as if they really thought I couldn’t figure out where they took me, geeze! ), gassed by a flatulent Fedoran, given the cold shoulder by the fucking head of ‘Port Security (I’ll put her on a fucking spit and roast her slow), and to top it off that fucking asshole Dollavera trying to wheedle out of not spilling the beans about the gang war brewing right under his and his goddamn brothers’ fucking noses (brothers, there’s a misnomer for you, fucking brothers my ass, fucking clones).

Clones. She took a deep and sustained breath. Good looking clones, sexy clones who boiled her juices every time she was within ten meters of their athletic bulk. Bastards.

She ordered her thoughts and skipped through the interview with Riz Gitto, the retired head of ‘Port Security and CEO of Adana’s newest private security firm. She could tell he wanted her badly, his pale gray eyes undressing her six times during the five minutes she talked to him. He wasn’t bad looking for an old guy and would be a useful contact, so she’d fluttered her dark lashes back at him and deflected his request for a date with the usual stop kidding around, I’m working line and jumped into the interview with that asshole K. Dollavera. At least Riz hadn’t made a grab for her tits.

Exactly why she let Dollavera get under her skin she couldn’t fathom. It wasn’t just that he was a slimy asshole. No doubt it had something to do with the fact that she’d dated (a couple of times) his “brother” Zweep, the Sentient Resources Controller of the family monopoly, the Amalgamated Spaceport Guild of Scavengers. She’d dumped Zweep at the first inkling of his suspicious business dealings. No way could she compromise her journalistic standards by seeing the man at the center of what could be the biggest scandal in Adana history. The fact that she let him go not ten minutes after she met their “brother” Maxim might, she conceded, have had something more to do with it other than being a breathtaking coincidence.

Maxim, the New Year’s Eve hero who had risked his life to save others from a terrible disaster, was something special. There was a guy who knew how to boil the juices, and what made him yummier was that he didn’t even know he did it.

The thought of Maxim being caught up in a shady family business was giving her sleepless nights. He’d been away, supposedly scavenging, for the last month, more likely avoiding the hundreds of fans attracted to his celebrity, so she hadn’t been able to talk to him about it. Not that they were on speaking terms yet; he probably didn’t know she even existed.

I’ll have to change that little detail.

If nothing else, her publicly nailing his two brothers would bring her into his orbit soon enough. What worried her was that Maxim seemed smarter than his “brothers,” and even in the brief moments she saw them interact, they seemed to defer to him. Her worst fear was that he was actually in charge of the operation while posing as a loner, supposedly scavenging the asteroid belt for junk. It would be the perfect cover, playing the dirt smeared grunt collecting trash while secretly pulling the strings behind the ‘Port Authority.

There was a tug at her trouser leg. A grubby face with enormous eyes and a mess of yellow hair looked up and gave her a gap toothed smile.

“Hello, sweetie,” Holly said. “Got something for me?”

The little angel, one of Adana’s many corridor kids, nodded and cupped a tiny hand near her mouth. Holly knelt down beside her and turned her head, brushing aside her raven hair so the little girl could whisper in her ear.

Holly’s heart jumped at the message. “Thank you, sweetie,” she said. “How much?”

The girl put up three fingers, indicating there were two others involved in the chain of observers that had brought her this longed-for news. Holly dropped four credits into her small palm and was rewarded with openmouthed astonishment. She always paid more than the going rate. It guaranteed preferment in the Adana rumor mill.

So, Maxim Dollavera had returned. He was in customs at this very moment and if she hurried she’d catch him.

And then what? She bit her bottom lip and snapped shut her oversized equipment bag. I have no idea, but I’ll think of something. I always do.

More from Mikala at Changeling Press …

Aussie Mikala Ash lives a hectic double life, mild-mannered training & development consultant by day… wild sci-fi and paranormal adventure writer by night. “For me, burning the candle at both ends is not such a terrible problem; I’m having too much fun!”