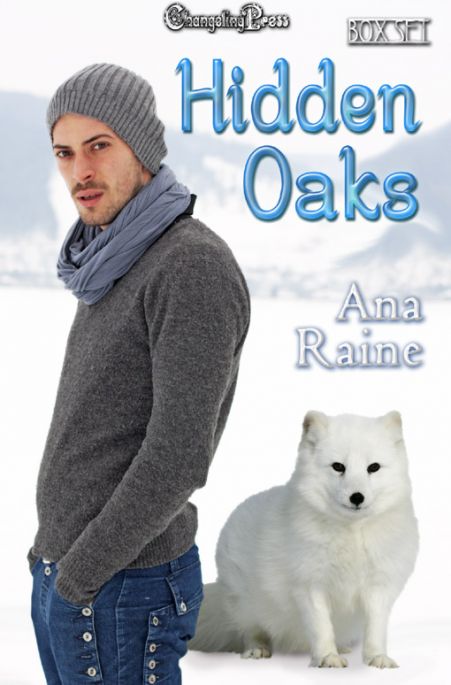 The Secret of Hidden Oaks: While working on his Master’s degree in psychology, Carson is offered an internship at a private research hospital. But Harbor Oaks hides a dark secret. His patients are Changelings, shape shifters, being held against their will, and Carson soon discovers he’s really the subject of the scientist’s experiments. His only hope of escape is Tate, a shy, quiet doctor with an agenda all his own.

The Secret of Harbor Springs: Carson and his mate Tate team up with Gaven and Lily to escape Federal agents who are trying to bring them back to Hidden Oaks. Carson holds an unusual power over other Changelings — a power the Federal task force charged with rounding up Changelings will go to any ends to make their own.

Liberate: Carson and Tate have been running for months, trying to evade the JIA so they don’t end up lab specimens for the ruthless organization. With their future on the line, Carson realizes the most important part of his life will forever be his mate, Tate, but how can he trust a man who never tells him the whole truth?

or preorder for October 18th at retailers

Praise for The Secret of Hidden Oaks

“Ana has a pretty good imagination and can spin a wonderful story with it. It caught my attention from the start and kept my attention all the way to the end.”

“If you like mysterious conspiracies and weird goings-on, if you enjoy reading about men who have a lot to hide and those who hunt them, and if you’re looking for a fun story with some dark secrets around shifters, then you will probably like this short story.”

All rights reserved.
Copyright ©2019 Ana Raine
Excerpt from The Secret of Hidden Oaks

“They are not human,” Dr. Kline explained.

“You are delusional,” I said, taking a step away from Dr. Kline, but unable to stop looking at the young woman. I was sure my vision was playing tricks on me, because the young woman’s arms were gone and in their place were fur-covered legs. Her dress split down her back and as she howled in agony, I saw her entire body was quickly being covered in fur. Her screams were over soon.

Instead of looking at a young woman, I was staring at a dark feline. I thought it was a jaguar. “W-what…”

“All of the patients here are a danger to society and to themselves,” Dr. Kline explained, hitting the red button again so the lights went out, leaving only natural light. Before my eyes, the fur receded back into the jaguar’s body and flesh began to cover her legs and back.

Dr. Kline smiled and pressed the color button before touching my shoulder lightly. “We call them Changelings.”

My hands were still shaking, my knees knocking against each other as I fidgeted in the chair in front of Dr. Kline’s desk. What was wrong with them? What was wrong with me? Surely, that was some sort of trick and that young woman really hadn’t transformed into a jaguar? All lies…

“Have you decided?” Dr. Kline asked softly, as he pushed the two boxes toward me.

Stay or run away? Both options were equally unappealing. The drug he wanted to give me that would erase my memory would probably only work as long as I didn’t have any triggers. How could I forget when there were animals everywhere to remind me?

A knock on the door made me twitch. I turned to see the heavy oak door being pushed open. I was afraid of who was going to enter, not sure if a patient was able to escape out of their crisis stabilization unit and was going to come charging at me. Maybe instead of erasing my memory, they were really just going to erase me.

“Ahh, Dr. Tate.” Dr. Kline stood up and went around the side of the desk. I leaned away from him and I was sure he saw, but he just pursed his lips together and didn’t remark. “This is Dr. Tate, Carson. He’s one of our leading doctors, although these days he spends more time in our research department.”

“Hello. This is the new intern, Carson, was it?”

His voice made my back tingle. I focused on the desk, knowing if I looked at Dr. Tate I probably wouldn’t fare well. His voice was smooth and confident, the exact kind of man I preferred.

The way he’d said my name was already enough for my stomach to begin pooling with heat. I couldn’t keep staring at the same lines in the oak desk. Slowly, I looked up at the new doctor.

My breath hitched. He was tall, towering over Dr. Kline, who already towered over me. He had soft blonde hair, several shades lighter than my dark brown. His blue eyes were clear and focused on me, his lips upturned in a marvelous smile. But his body is what really got me going. He wasn’t wearing a lab coat, but instead dark pants and a crisp blue sweater that exposed just enough of his creamy skin at the base of his neck.

I should’ve known looking at him would be dangerous.

“Please tell me you are planning on staying with us?” Dr. Tate asked softly, as he crossed the room to me and took my hand. My hand was rather small inside of his. I felt trapped.

Dr. Tate’s jaw locked, but Dr. Kline was the one who clapped his hands and exclaimed, “Excellent.” He grabbed the contract out of the box and shoved a pen in my hand.

I tried to scan the document, but although Dr. Tate had released my hand, he was still standing dangerously close. I could feel his eyes on me, and wished he would undress me instead. Shuddering, I passed my movement off as a twitch and signed the contract.

Dr. Kline scooped up the contract and placed it in a folder in his filing cabinet.

“So… what exactly am I supposed to do?”

“Dr. Tate is going to be your mentor. When you go into the patients’ rooms, he will be there to make sure everything goes well.” Dr. Kline waved a hand at the handsome man standing beside me. I almost felt a sense of possessiveness emanating from Dr. Tate. “He is a scientist, now, as I said. You will have time enough to shadow one of our psychologists here so don’t worry about getting your necessary experience. But we have a… more pressing use for you.”

My chest tightened. What kind of use?

Dr. Kline seemed to have read my mind. “We would like you to teach them how to be human, in a manner of speaking.”

“Simply by being, although I am sure you will come up with some techniques and hypothesis on your own. The most important thing you must remember is to never wear or carry anything red. Do you understand?”

I remembered the young woman convulsing on the floor. “Yes.”

“We would like to let the Changelings go back to society, but in order for that to happen, we need someone who has not been working with them to grasp what is different about them from humans. I expect you’ll keep a journal.”

“Of course.” They wanted me to document changes in behavior? This internship kept sounding stranger.

Dr. Kline stood up so I followed suit. He started to extend his hand toward me but then withdrew it on second thought. “Please come to me if you need anything.” He smiled at me and then gave Dr. Tate one experimental glance before going to his large bay window and turning his back to me.

“Come with me.” Dr. Tate nodded toward the door. Something about him was strangely protective. Just by standing near him I felt my fear about Hidden Oaks subsiding. God, I bet he was so good in bed.

Silently, I followed Dr. Tate, hesitating when we approached the elevator.

“Don’t worry,” he said kindly, “We’ll be going to the top floor where the lab is.”

“My office is up there.” He grasped my wrist, pulling me onto the elevator with him. When he released me, I had to resist the urge to reach back out for him…

More from Ana at Changeling Press …