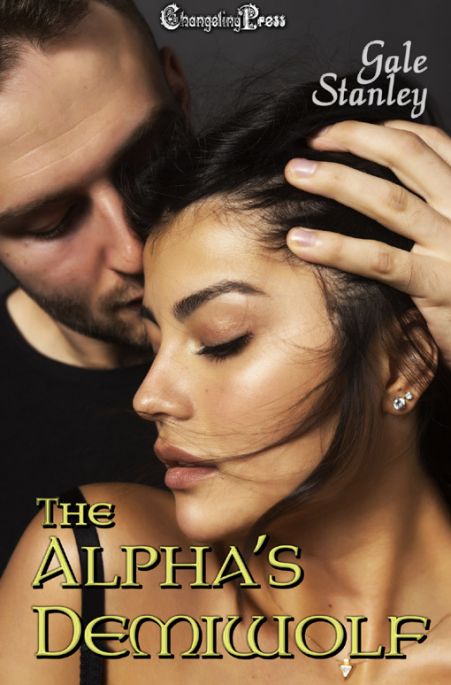 Kya: I’m a demiwolf — half wolf, half human, and both species despise my weird mix of genes. Despite the fact I strip for a living, I’ve hung on to my virginity for twenty-two years. Until I got knocked up by a big, bad wolf. Now, I’m going to bring another demiwolf into the world, but his father will never know.

Levi: I’m all wolf, and Alpha of my pack, committed to keeping our bloodlines pure. Then on the night of my bachelor party, I hooked up with a stripper. I just wanted to teach the demiwolf a lesson, but the sex set me on fire. My wolf claimed her and now I can’t get her out of my head. But what if she won’t accept me?

or Pre-Order for October 11th at retailers

I cringed when I saw the billboard proclaiming, Girls! Girls! Girls! It was a tacky way to get attention, and I hated it. Averting my eyes, I turned the corner, pulled into the lot, and parked my old pickup behind the club. It was my first night at Show ’n Tails, and a definite step down from my old job, but I’d been fired and needed a gig ASAP.

The incident wasn’t my fault. There were two of us on the stage and Brandi was so sloshed she invaded my space and fell on her ass. As if that wasn’t enough, she accused me of tripping her. Well, one thing led to another and we both got canned. Another girl told me that Show ’n Tails was hiring and I went for an audition. The manager was an asshat, but he doesn’t ask too many questions. I like to keep a low profile.

This isn’t the life I wanted, but taking off my clothes pays the bills, and I won’t apologize for trying to earn a living. At least I’m not selling my body, just the illusion of sex. A lot of girls up their game, but not me. My virginity is the last piece of self-respect I own and I won’t give it up to some creep for any amount of money.

The heavy backdoor slammed shut and locked behind me and the manager shot me a dirty look. “Hey, Kya. You’re late.”

“Sorry, it won’t happen again. And my name is Raven when I’m working.”

Marty’s lip curled in a sneer. “Yeah, yeah. Whatever. You better get dressed. I mean undressed.” He snickered.

I ignored his disrespectful ass, and walked over to the dressing room. A row of dented lockers lined one wall. A wide counter with a lighted mirror behind it ran the length of the opposite wall. Everything stunk from sweat and cheap perfume. The long vanity was cluttered with makeup and no one made room for the new girl, so I started changing next to my locker. When a spot at the mirror opened up, I grabbed it and started working on my wild black curls.

Marty stuck his head in the door. “Hey, fresh meat, you’re on next.”

I knew he meant me. I was the newest girl there. Half of me cringed, the half that’s wolf. The half I keep hidden. Or is it a quarter of me I keep hidden? I guess it depends on how you look at it. A full-blooded wolf-shifter is already half human, although they’ll never admit to it. My father was a wolf, but my mother was human.

Does that mean I’m… Oh, fuck the fractions. No matter how you look at it, I’m a demiwolf.

But I look human. I checked my body in the mirror. Yep, a hot as hell human female stared back at me. Tacky, but sexy. Nothing says stripper like stiletto platform heels and a thong that shows off a girl’s booty. I slipped on a white, halter mini-dress with a drape-neck, an open back, and a side slit. Then I ran my hands through my curls and gave my lips one last swipe of purple-plum gloss.

It’s so much easier to call myself human and blend in with the majority. The humans are clueless. They know we exist, but they believe we keep to our own side of the tracks. The wolves are a different story. They can smell my lupine pheromones, but they don’t want me. I’m not pure. Fuck ‘em. At least I can make a living among the humans. Stripping might be a trashy job, but it pays for the life I’m trying to live. It’s not the life I want, but it’s all I’ve got. I used to dream about being accepted by my father’s people. Fat chance. They wouldn’t even accept him because he had a human lover and a half-breed kid.

My parents never married, but they lived together — sometimes. When my father was around, I was daddy’s girl. But all too often, he would disappear as if he had no family. My mother would drink and tell me that he liked to hang out with his own kind in places where we weren’t accepted. When he came back from his trips, he’d act cold and resentful, but it wouldn’t last long. Eventually, he’d tell me he loved me and everything would be okay again. I thought nothing would keep us apart for good. I was wrong.

One day he didn’t come back. We found out he was killed in a bar fight. One of his so-called friends called me a mongrel and Dad died defending me. My mother cried and cried. She said this was why they never wanted kids. So I was what… an accident?

I couldn’t blame them. Not really. Life was hard enough without being born with this weird mix of genes. I hated myself, too. I wished I’d never been born. At least I could make things easier for my mother. As soon as I finished school, I left home and never looked back.

While waiting to go on, I thought about my routine — floor work, then pole dancing, then back on the floor. I’m not nervous anymore about being naked in front of a roomful of men. I was at first, but now I focus on my moves. I’ve been scorned and dehumanized all my life, so I like to emphasize something I can do well — dance.

I peeked through the curtain and watched Candy finish her routine. There’s a mirror behind the stage and a pole in the center. Chairs surrounded the stage for customers who wanted direct contact with the dancers. I watched one of the men put a bill in his mouth. Candy shoved her breasts in his face and used them to grab the money. There were hoots and hollers and more men waved bills at her. She collected all of her tips, then picked up her clothes, and ran off the stage.

The DJ, sitting in an alcove nearby, introduced me. “Next up is a beautiful lady who’s new here. You’re gonna see her naked for the first time tonight.”

Well, it’s not a complete lie. It’s my first time naked on this stage.

“Give Raven a nice warm welcome.”

My heartbeat skyrocketed as I stepped through the curtains and climbed the three steps to the stage. The opening bars of my music started up and I began to move.

Get more from Gale at Changeling Press …